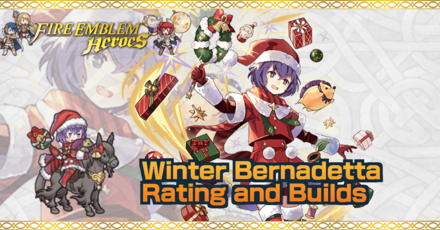 This is a ranking page for the hero Bernadetta - Frosty Shut-In from the game Fire Emblem Heroes (FEH). Read on to learn the best IVs (Individual Values), best builds (Inherit Skill), weapon refinement, stats at Lv 40, and more for Winter Bernadetta.

If you want to take advantage of her only superboon, you can get a +Spd IV instead.

We recommend a +Atk IV when merging Winter Bernadetta to 10. Her Spd is already elite at this point so raising Atk is a better option in raising her overall damage. However, you can still go for a +Spd IV if you really want to.

This is simply a budget build that slaps the standard Reposition and the always reliable Swift Sparrow 2 Sacred Seal. It allows Winter Bernadetta to land consistent follow-up attacks on the fastest of foes.

Winter Bernadetta's weapon cannot currently be refined. This section will be updated if it becomes refineable in the future!

Winter Bernadetta is a ranged magic attacker (range = 2). Therefore, when not accounting for the Weapon Triangle, the amount of damage she deals will be equivalent to her Atk minus the foe's Res stat.

Can inflict damage on allies!

This might be seem like a weakness, but Hrist deals damage to allies at the start of a turn if Bernadetta is at 100% HP. Since -1 HP is negligible, it can be safely used to setup allies that have trigger conditions that require them to have less than 100% HP.

It can also counter weapons like Summer Lyn's Deep-Blue Bow as it grants +4 Atk/Spd/Def/Res to Lyn if she initiates combat on a foe with 100% HP.

Though this can also counter allies that require full HP to trigger skills so watch out. Be aware of your whole team's skill effects.

All of this add up to +22 Atk/Spd just by meeting very simple trigger conditions. This means she will hit very hard and score frequent follow-up attacks. Because Moonbow only has a cooldown of 2, Winter Bernadetta can activate Moonbow everytime she nails a follow-up attack provided she gets hit by a counterattack and survives it. Because of this massive Spd boost, she is sure to nail a bunch of follow-up attacks which means a bunch of Moonbow activations too!

Possesses a defense mechanic in Hrist

On top of Hrist's offensive effects, it also reduces damage from the foe's first attack by 30%. This is a lot and since Winter Bernadetta has high Spd, you would not be taking much second attacks anyway. This helps with her defensive end as she does not have much defense to begin with besides her high Spd.

Winter Bernadetta takes 1.5x damage from cavalry-effective weapons like Ridersbane or Rauðrwolf+, and one blow from this type of weapon is sure to take her down. Make sure you know what weapons you are up against before hopping too far into the line of battle!

Should you Unlock Potential for Winter Bernadetta?

Bernadetta - Frosty Shut-In Only Appears as a 5 Star Hero!

Winter Bernadetta as a Source Hero

Winter Bernadetta can be used to inherit Atk/Spd Solo 4, Lull Spd/Res 3 or Rouse Atk/Spd 3. However, Winter Bernadetta can provide some firepower in your cavalry lineups so think carefully before fodderring her off. Additionally, she is a special hero and this means she is only available from specific banners.

How to Get Winter Bernadetta / Illustrations / Voice Actor / Quotes

How to Get Winter Bernadetta

Winter Bernadetta is a limited time Hero who can be pulled from a Special Heroes Summoning Event. They do not appear in regular summons.

>>1 Hey Jota, good day! Thank you for pointing this out. This is a mistake on our part.

Register as a member and get all the information you want. (It's free!)
Login
Opinions about an article or post go here.
Opinions about an article or post
We at Game8 thank you for your support.
In order for us to make the best articles possible, share your corrections, opinions, and thoughts about "Winter Bernadetta Builds and Best IVs" with us!
When reporting a problem, please be as specific as possible in providing details such as what conditions the problem occurred under and what kind of effects it had.