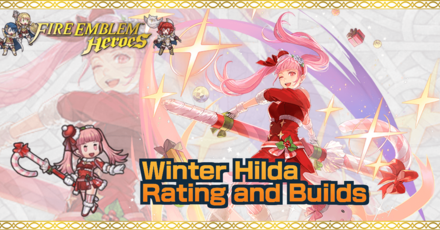 This is a ranking page for the hero Hilda - Holiday Layabout from the game Fire Emblem Heroes (FEH). Read on to learn the best IVs (Individual Values), best builds (Inherit Skill), weapon refinement, stats at Lv 40, and more for Winter Hilda.

The best IVs for Winter Hilda are +Atk and -HP. A +Atk IV is very helpful as it allows her to deal as much damage as possible. Since she is in the frontlines, we cannot say that HP is an unimporant stat, but since it can be made up for through upgrading her weapon, it can be safely taken as her bane.

We recommend a +Spd IV when merging Winter Hilda to 10. At +10 Merges, Hilda's Atk will reach such high levels that pushing it up higher is a waste. At this point, it would be better to opt with a +Spd IV instead to help her take less follow-up attacks and allow her to make some follow-up attacks on his own. Follow-up attacks also speed up special activation.

This is under the assumption that you would not be running Even Follow-Up 3. In our DC Winter Hilda build, we have replaced this skill with Special Fighter 3 which is arguably superior skill that is fitting in more scenarios. If you will run Even Follow-Up 3, then by all means get a +Atk IV.

This is a standard Distant Counter build for Winter Hilda. It is much more expensive compared to the budget build. This is somewhat of an opposite build compared to her base kit. Instead of benefitting from being near allies, Flowing Lance+ requires Hilda to stay away from allies. This is why Rouse Atk/Def 3 and Spd/Res Solo 3 is also picked up as they have similar trigger conditions. Special Fighter 3 improves both offensive and defensive ends in both phases so it is a skill that easily fits in this build. Armor March 3, Pivot combined with Distant Counter are picked up to allow Hilda to easily land hits on the enemy team.

This is a budget build for Winter Hilda. Bonfire is a great special to have on her because it scales by stacking Def on her. The two other additions are Ward Armor and an Armor March 3 Sacred Seal. This means that this build will work best if she is with other armored units. Make sure said units are also carrying C skills like Hone Armor so that Hilda will get her share of buffs. The Sacred Seal is chosen because Hilda's main weakness is her armored movement.

Winter Hilda's weapon cannot currently be refined. This section will be updated if it becomes refineable in the future!

Winter Hilda is a close physical attacker (range = 1). Therefore, when not accounting for the Weapon Triangle, the amount of damage she deals will be equivalent to her Atk minus the foe's Def stat.

Candy Cane+ provides effects simply by being near allies

If Winter Hilda is simply within 2 spaces of an ally Candy Cane+;

This improves her offense slightly, but it makes a great change to her defense as the Special-delaying effect against foes will allow Hilda and her team to take less damage from the enemy team.

Atk/Def Form 3 increases Winter Hilda's Atk/Def by the number of allies within 2 spaces of Winter Hilda. Although the max value of the buff is only +7 Atk/Def, it is still a powerful and convenient buff that is easily triggered. Additionally, it stacks with Candy Cane+, making Winter Hilda's kit very straightforward and easy to use.

It also has a very similar trigger condition with Candy Cane+ so as long as you have allies nearby, you can secure a +12 Atk/Def bonus.

This can be tricky to use in fast-paced game modes like Aether Raids and Resonant Battles. Turns are limited in these maps so it will be hard to utilize skills like this.

Even Follow-Up 3's catch is that it does not work in odd-numbered turns. As mentioned, this makes her hard to utilize in fast-paced game modes. It also might not be smart to run Winter Hilda in auto-battle.

Winter Hilda takes 1.5x damage from armor-effective weapons like Armorslayer+ or Hammer+, and one blow from these types of weapons is sure to take her down. Make sure you know what weapons you are up against before hopping too far into the line of battle!

Should you Unlock Potential for Winter Hilda?

We Recommend You Unlock Potential for Hilda - Holiday Layabout!

Winter Hilda as a Source Hero

Winter Hilda can be used to inherit Candy Cane+ or Even Follow-Up 3. However, Winter Hilda is a special hero that can provide armored firepower to your lineups. Please think carefully before fodderring her off.

How to Get Winter Hilda / Illustrations / Voice Actor / Quotes

How to Get Winter Hilda

Winter Hilda is a limited time Hero who can be pulled from a Special Heroes Summoning Event. They do not appear in regular summons.

>>3 Happy holidays! It can be upgraded, but not refined.

Hilda’s weapon can be refined

Register as a member and get all the information you want. (It's free!)
Login
Opinions about an article or post go here.
Opinions about an article or post
We at Game8 thank you for your support.
In order for us to make the best articles possible, share your corrections, opinions, and thoughts about "Winter Hilda Builds and Best IVs" with us!
When reporting a problem, please be as specific as possible in providing details such as what conditions the problem occurred under and what kind of effects it had.