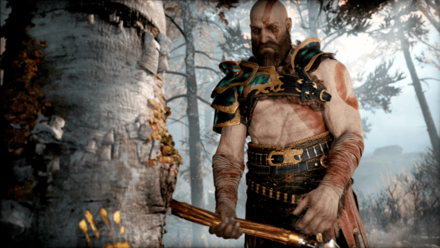 Kratos is one of the major characters in God of War 2018, a former God of War in the Greek pantheon of gods, and the main playable character. Read on to learn about his story, his abilities, and his role in-game!

The titular God of War, Kratos is a Greek God that serves as the series' main character. He is a demigod, one of the many sons of the god Zeus before besting the God of War Ares. He would take up his mantle and would, in the end, bring about the end of Olympus and its pantheon of gods before coming to the shores of Midgard.

As a chapter closes in Kratos' life with the destruction of Olympus and its gods, he finds himself on the shores of a new land with a new focus in his life. As he ventures out from the safety of his home to fulfill the last request of his wife, he must defend his son from the many dangers their quest comes across.

Kratos returns in God of War PS4 as the main playable character throughout the story. He and his son Atreus venture out on a quest throughout the realms to spread his wife's ashes atop the highest peak across all the known realms.

A Father to Loki

Since leaving the destroyed lands of Sparta, Kratos comes upon the shores of Midgard, ultimately meeting his wife. They bear a child called Atreus, whom Kratos struggles to form a bond and relationship with throughout the game after his wife's death. Together, they come across many challenges and hurdles as they quest through the realms on a mission to spread his dead wife's ashes atop the highest peak.

Upon their quest's conclusion, the true name of Atreus – the name his mother wanted for him – is discovered to be Loki.

Throughout their journey, a mysterious god known as Baldur interrupts them at every turn. An Aesir, Baldur is one of the many gods and sons of the Aesir God Odin, whose efforts to save his godhood from ending lay waste to many of the realms.

Kratos and Atreus battle against the gods that try to hinder their progress, ultimately managing to end Baldur's life at the cost of Freya's friendship, who served as their aid in their quest towards spreading Kratos' wife's ashes.

A gift from his new wife, the Leviathan Axe is a versatile weapon capable of slaying monsters and enemies that make use of fire as their strength. As a weapon that can be thrown, recovered, and used in one attack combo, the axe's true worth comes with its ability to freeze objects and enemies in place, allowing you to maneuver yourself into a much more advantageous position.

How to Get the Leviathan Axe

The weapon Kratos originally favored, capable of slaying monsters and enemies that use the cold as their strength. Enemies can be dragged closer to you or set ablaze using the blades – all while the chains set on the weapon allow it to be used as a weapon with great range.

How to Get the Blades of Chaos

An unbreakable shield that provides safety to its users. Using the shield allows you to make use of your fists as well – allowing you to brawl with your enemies, stunning them quickly and leading them to vulnerable states that lead to life-ending attacks.

How to Get the Guardian Shield

Post (0 Comments)
Opinions about an article or post go here.
Opinions about an article or post
We at Game8 thank you for your support.
In order for us to make the best articles possible, share your corrections, opinions, and thoughts about "Kratos Character Information" with us!
When reporting a problem, please be as specific as possible in providing details such as what conditions the problem occurred under and what kind of effects it had.