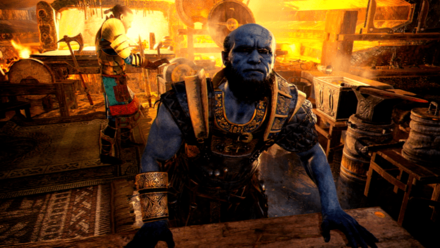 Brok is one of the major characters that appear in God of War 2018, and serves as one of the primary sources of equipment and gear. Read on to learn more about Brok's story, his abilities, and his relationship with the gods!

Brok is one of two primary sources of new equipment you can find throughout the world. He also provides upgrades to your gear, similar to his brother's services.

A Dwarf whom Kratos and Atreus meet in their journey, Brok is a blacksmith whose fame and capabilities are rivaled by his brother, Sindri. He aids the father and son pair throughout their journey, providing them new equipment and upgrades to their gear.

He also provides the pair with various Favors, giving them rewards once completed.

Before the events in the game, Brok and his brother Sindri were two of the greatest blacksmiths of great renown throughout the realms. The two are opposites of one another, with Brok being the least amicable of the two due to his hotheaded and impolite nature. The two brothers grew estranged from each other, ultimately leading to the separation of the "brand" they use to mark their works.

A Relationship With the Gods

As a blacksmith, Brok used to work with the various Aesir gods alongside his brother. They both had a hand with crafting Mjolnir, the weapon favored by Thor.

Before meeting Atreus and Kratos, both Brok and Sindri worked together to form the Leviathan Axe which they gave to Kratos' wife. Both Dwarves would learn what became of their fine work when Kratos and Atreus meet them both in their journey.

A Friend to Atreus and Kratos

Throughout much of Atreus and Kratos' trek through the realms, Brok would appear now and again in places that the two visit – his shop always open for the both of them. He would provide many upgrades to the Leviathan Axe, even briefly tinkering with Kratos' Blades of Chaos to provide it with a means of capturing the Winds of Hel.

Early on in Kratos and Atreus' journey, Brok provides them with a means to quickly travel from one place to another through the use of Mystic Gateways. He, later on, makes it so that traveling back and forth between the gateways becomes possible.

Similar to Sindri, Brok can travel anywhere he wishes to, allowing him to appear in places that Kratos and Atreus visit throughout their journey.

Post (0 Comments)
Opinions about an article or post go here.
Opinions about an article or post
We at Game8 thank you for your support.
In order for us to make the best articles possible, share your corrections, opinions, and thoughts about "Brok Character Information" with us!
When reporting a problem, please be as specific as possible in providing details such as what conditions the problem occurred under and what kind of effects it had.