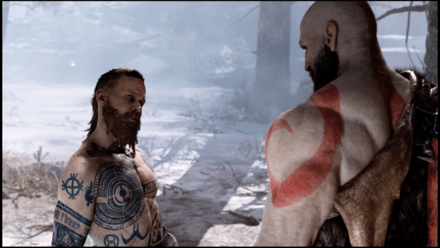 This is a page for the character Baldur in God of War (PS4). Read on to find out Baldur's role, powers, and more!

Baldur is one of the many gods in the pantheon of gods which Odin leads. He serves as the primary antagonist throughout much of Kratos' and Atreus' journey throughout the realms due to a misguided belief that battling the two would bring about a cure to the numbness brought on by his mother Freya's protection.

As one of the many gods that rule over Midgard and several other realms, Baldur has a reputation of being a warrior alongside other gods such as Thor. Freya, due to her constant worrying over her son, cursed Baldur to never die, making him practically invulnerable to any and all injuries that would result in his expiration.

This "protection" however ultimately leads to a side effect wherein Baldur can no longer feel anything, leaving him crazed and angry at his mother.

After years of suffering due to the lack of any sensations with his touch, Baldur grows desperate and crazed. After Kratos' and Atreus' hunt in the woods surrounding their home, Baldur pays the two a visit, unknowing of Atreus' existence. He goads Kratos into a fight, surprising the other god by his ability to recover from any attack that Kratos makes against him. He ultimately loses the battle, temporarily being disabled by Kratos after his neck is snapped.

Throughout much of the game, Baldur silently stalks the father and son duo. He comes to Mimir with questions on how to defeat Kratos, but is ultimately turned away. When Kratos and Atreus manage to open the gateway to Jotunheim temporarily, Baldur appears – in the resulting battle, the gate to Jotunheim is destroyed.

Baldur would then go on to kidnap Atreus after the boy's attempt to fight him, with Kratos ultimately chasing after them resulting in a crash into the realm of Helheim where Baldur suffers through many of his torturous memories.

As an act of revenge, Baldur manages to escape from Helheim on his own – he assaults the World Serpent Jormungandr while Kratos and Atreus are still inside of its of mouth, leading into one final confrontation with the pair.

Unknown to anyone, a piece of Atreus' mistletoe arrows he previously had was used by Kratos to repair his quiver, and this mistletoe destroys Freya's protection over Baldur after the god punches Atreus in the chest. With his senses back, Baldur enjoys the moment, before he turns vengeful once more and attempts to choke out his own mother. Kratos, in an act of defiance, snaps Baldur's neck one last time which results in his death.

Can Use Fire and Ice

Unlike most creatures that Kratos and Atreus encounter on their journey, Baldur is more than capable of harnessing both fire and ice as weapons in his attacks. Apart from this, prior to it being destroyed, he is also incapable of dying from injuries or attacks made against him, and can summon the will to replenish his health while in combat.

Post (0 Comments)
Opinions about an article or post go here.
Opinions about an article or post
We at Game8 thank you for your support.
In order for us to make the best articles possible, share your corrections, opinions, and thoughts about "Baldur Character Information" with us!
When reporting a problem, please be as specific as possible in providing details such as what conditions the problem occurred under and what kind of effects it had.