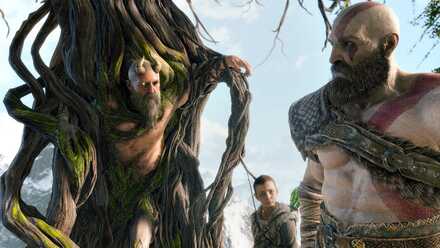 Mimir is one of the major characters in God of War, serving as both the player's as well as Kratos' and Atreus' primary means of gaining knowledge and lore about the world.

Much of Mimir's role in the game is a simple means of providing information to Kratos and Atreus on matters that will aid in their journey. He will also oftentimes remark on things such as from directions that Kratos cannot immediately see or is unaware of or when it comes to Kratos requiring aid.

Trapped in a Tree

When Kratos and Atreus first see Mimir, they see him in a defenseless state as he is being interrogated by Baldur, Magni, and Modi. Later on, the two will be able to free him by severing his head from his body after being reassured by Mimir of his safety, resulting in a new journey that leads back to Freya.

With the help of the Witch of the Woods, Mimir's severed head is revived, allowing him to fully converse with the group regarding their journey. This leads to a new phase in the game's story, prompting Kratos and his son Atreus to journey to Thamur and his corpse, resulting in a fiery confrontation with the brothers Magni and Modi.

Ally Until the End

As Kratos and Atreus source of wisdom, knowledge, and lore, Mimir sticks with the pair all the way throughout their journey, offering them advice and help as they navigate the curiosities of Midgard and the many realms they visit. Mimir ultimately provides them with a warning about Freya's future revenge after the tragic end of her son Baldur at Kratos' hands.

Due to Mimir's long life, he has had many experiences with many gods and kingdoms he has met and seen. This provides him with a near unlimited amount of knowledge about the world and the gods, even for someone like Kratos who exists in an entirely different pantheon itself.

In order for us to make the best articles possible, share your corrections, opinions, and thoughts about 「Mimir Character Information | God of War PS4 (GoW 4)」 with us!