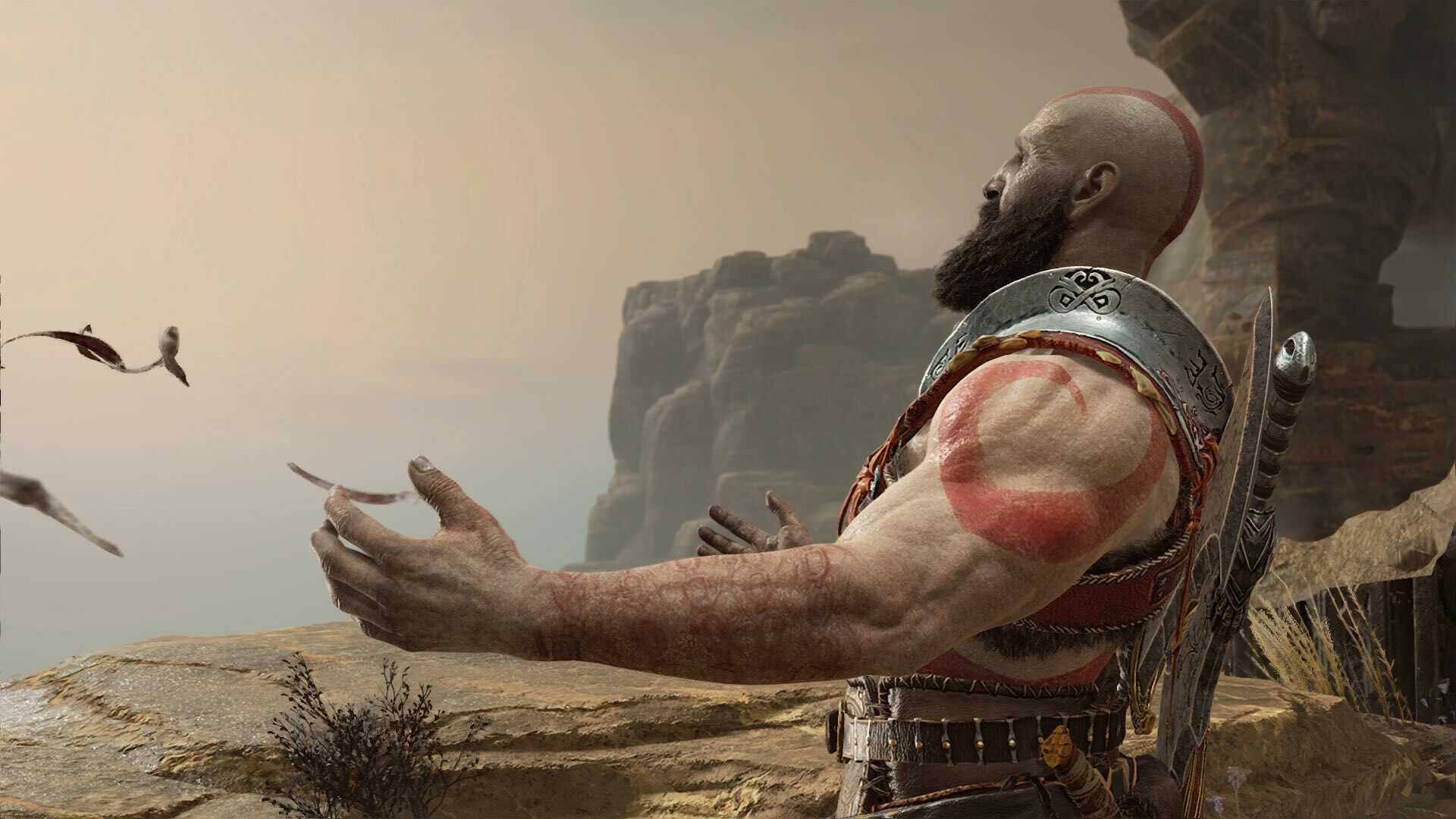 This is a guide to Combat Tips and Techniques for God of War (2018) for the PS4. Check out our tips to successfully control combat grounds. 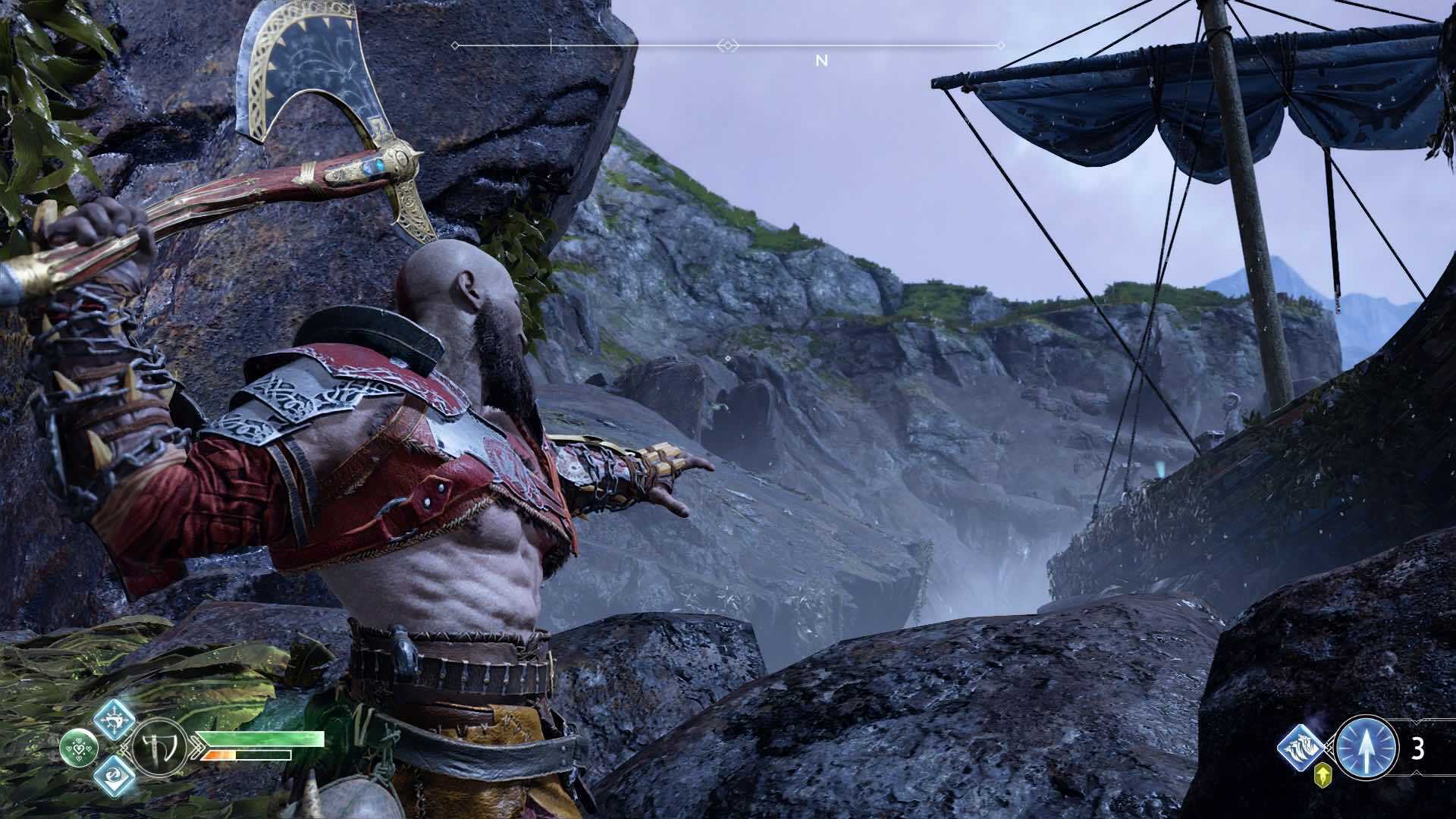 The Leviathan Axe is the main offensive weapon in God of War (2018). It enables Kratos to engage in both ranged combat and close combat.

The available attack list from the start of the game is:

Additonal movesets can be unlocked as you level up and unlock and discover Runic Attacks. 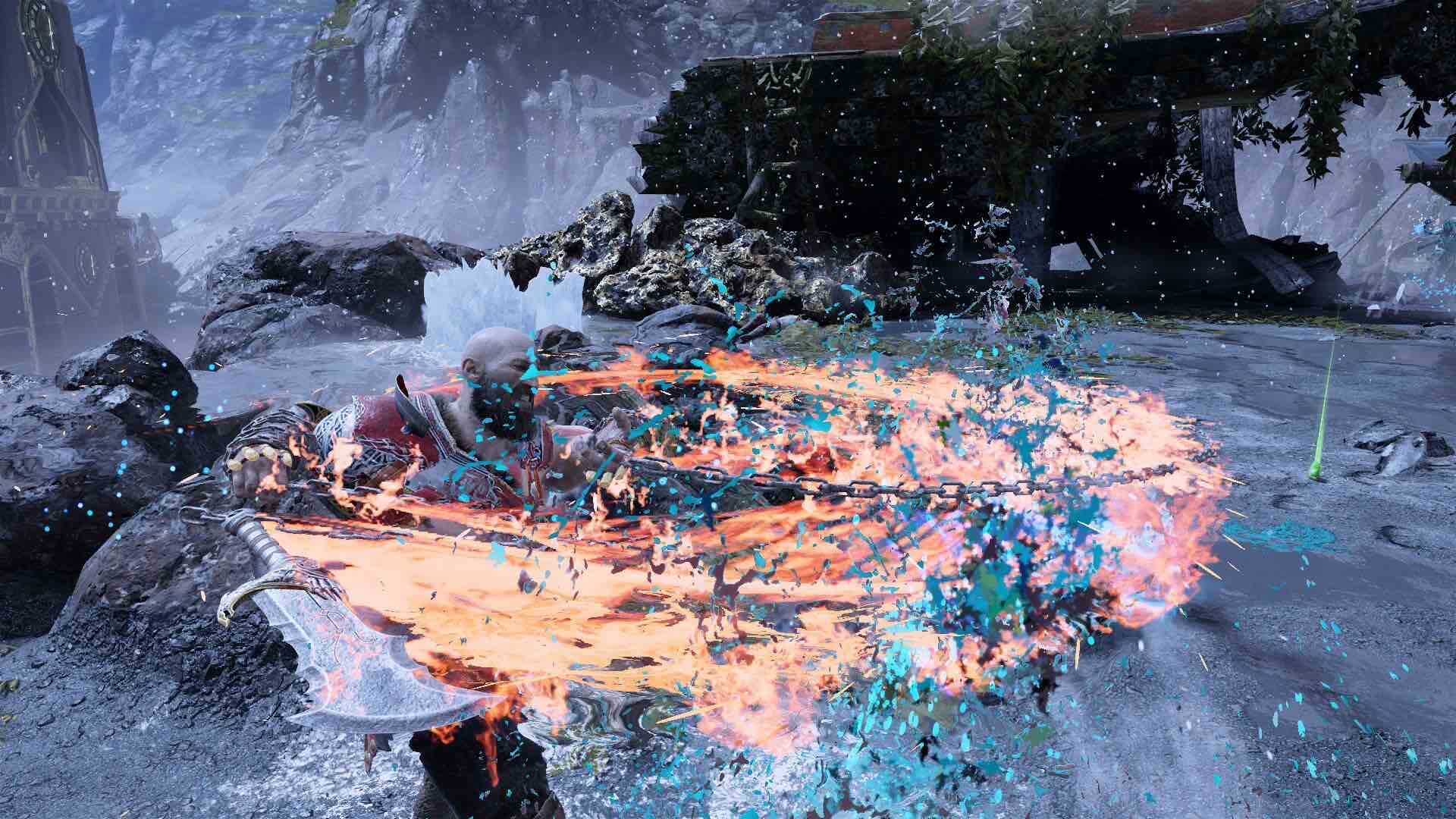 Blades of Chaos will also appear in a much later part of the game. This signature weapon of Kratos is perfect for ranged fights.

The available attack list from the start of the game is:

Additonal movesets can be unlocked as you level up and unlock and discover Runic Attacks. 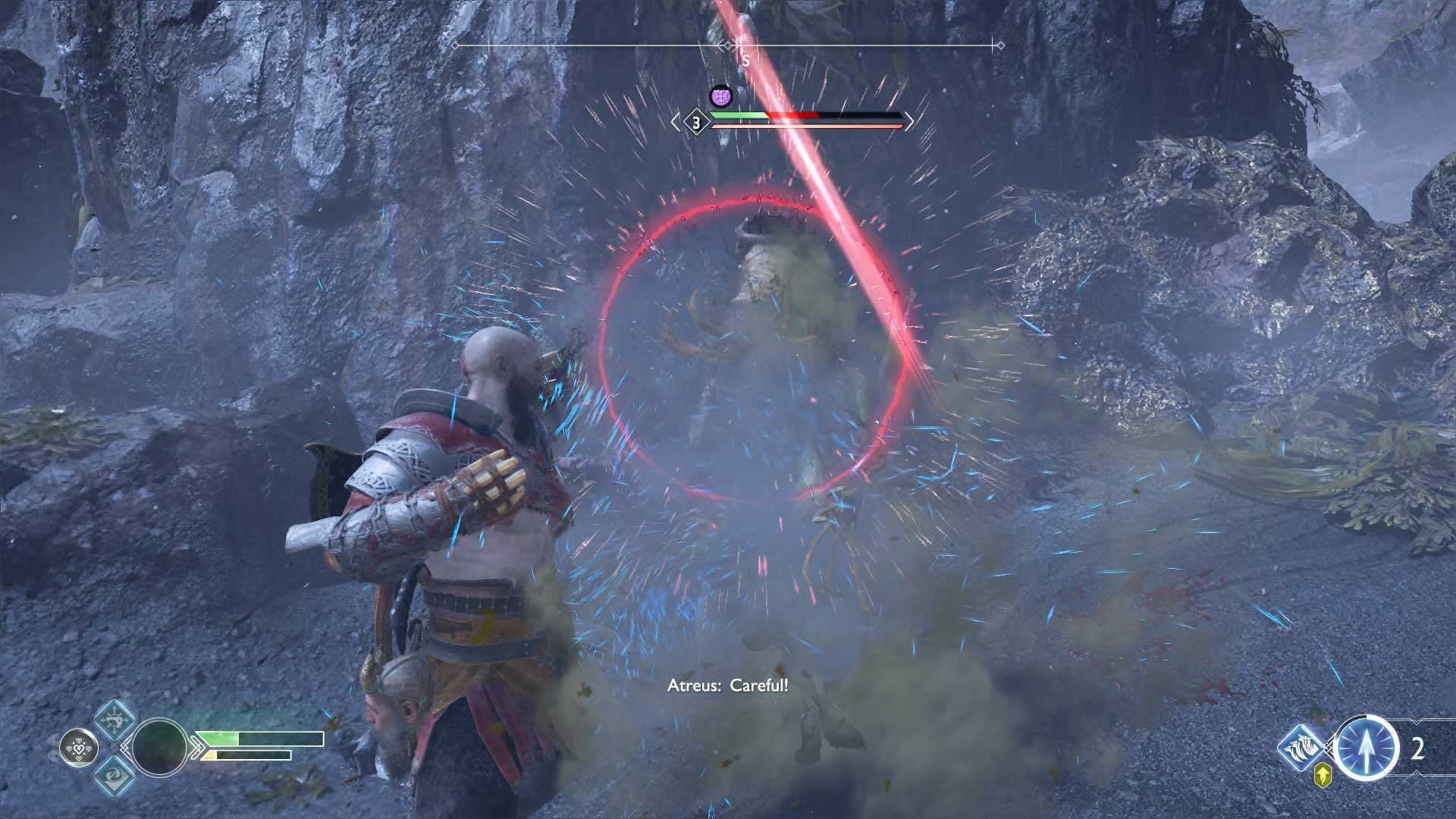 Bare-Handed Combat will allow Kratos to utilize his Fists, Legs, and Shield. This type of combat is especially effective for building up Rage Meter and Stun Meter.

If you are faced with a large group of opponents circling nearer, you can utilize Runic Attacks, such as Hel's Touch, to create space between Kratos and your opponents.

You can trip opponents by chopping at their feet when you throw the axe. This will momentarily incapacitate an enemy and leave it open to attacks.

Another way to control grounds even if you are outnumbered is by throwing the axe at a more distant opponent to keep them at bay, and then rolling away from another opponent to reposition yourself to a more dominant stance.

Leave the Axe Frozen in an Enemy

You can leave the Leviathan Axe frozen in an enemy using the Heavy Throw as you finish off another opponent in Bare-Handed combat. Either stun this opponent or kill them, and then recall the axe to inflict more damage to the other opponent.

Throw and Recall with Accuracy

If your opponent consistently stays in your crosshair, you can Light Throw the axe at them and then recall so that the axe hits the opponent again as the weapon hurls back towards Kratos.

It is difficult to get inside heavy-hitters' pockets, what you'll want to do is to try stunning them with Heavy Throw. Once they're incapcitated, you can close in on them and deal more damage or perform a Takedown.

Freezing an opponent with Heavy Throw can open up opporunities to deal damage in different ways. You can follow up with a Heavy Attack and send opponents hurling into a wall or into other opponents.

Try herding opponents together instead of isolating them. Blades of Chaos will give you enough range to inflict damage on multiple opponents.

Use on Distant Opponents

You can inflict damage on distant opponents by aiming at them and throwing Blades of Chaos. Likewise, you can bait mobile opponents from a distance and keep throwing the weapon at them.

Kratos will start using Blades of Chaos when you start journeying through Helheim as it is powerful against opponents with Ice affinity. Use this to your advantage and finish off targets quickly.

Another way to create space when multiple opponents are closing in is to Hold R1 to perform a sweeping slash. This will send opponents reeling back a bit and create some much needed space.

If you are unable to recall the axe right away, you can resort to stunning your opponent with the shield, additionally causing damage onto them, then you can recall the axe or opt to engage in a bare-handed fight.

Capitalize on Building Up Stun

As Kratos is able to build up opponents' Stun Meters much more quickly in this type of combat, try to capitalize on it to make your opponents more vulnerable to your attacks.

Capitalize on Building Up Rage

As Kratos is able to build up Rage much more quickly in this type of combat, try to capitalize on it to give Kratos that extra virility in battle.

You can dispatch weaker enemies more quickly with your Bare-Hands alone. At the same time, you are also building up Rage Meter.

Square Up with Armored Opponents

More likely than not, you may not be able to inflict damage using Leviathan Axe or Blades of Chaos on heavily-armored opponents. Your best option would be to go bare-handed.

Dodge, Parry, Roll, Attack, build up that Stun Meter quick and go in for more damage. 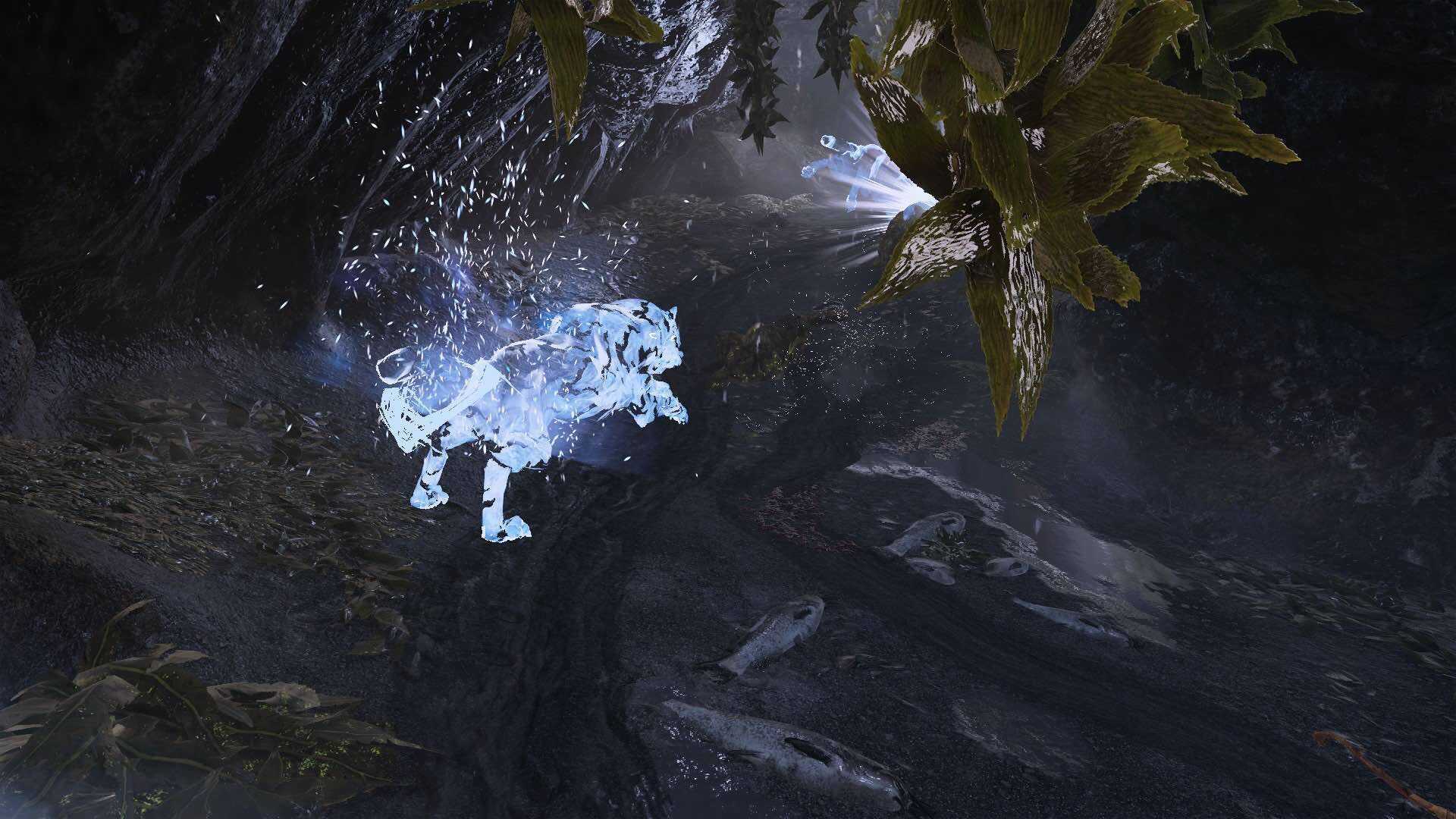 Combining Bare-Handed attacks with Atreus offense can build up an opponent's stun meter much more quickly whilst dealing damage.

This will come in handy with distant opponents you can't necessarily engage up-close. Either do a Light Throw or Heavy Throw all the while spamming the Square button for Atreus to let arrows loose.

When a particular opponent is proving to give you a much tougher time, you can opt to let Atreus distract them by letting him attack. There are also opportunities Atreus will be able to Stun opponents when he's been upgraded enough.

Post (0 Comments)
Opinions about an article or post go here.
Opinions about an article or post
We at Game8 thank you for your support.
In order for us to make the best articles possible, share your corrections, opinions, and thoughts about "Combat Tips and Techniques" with us!
When reporting a problem, please be as specific as possible in providing details such as what conditions the problem occurred under and what kind of effects it had.