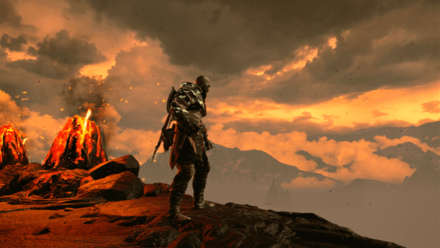 Track your completion rate and all collectibles in Muspelheim with the Muspelheim Region Summary for God of War (2018). Find out what items are still undiscovered and their location in the Muspelheim region, as well as how to get the Fire and Brimstone Achievement! 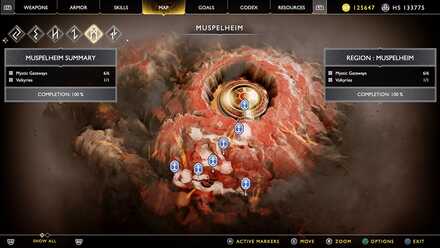 Although it is a large realm to explore, Muspelheim is one of the few realms/regions in-game that has little to collect or see, featuring only 6 Mystic Gateways and 1 Valkyrie fight. Instead of these collectibles, there are instead 6 challenges that players can play through to enjoy the realm. 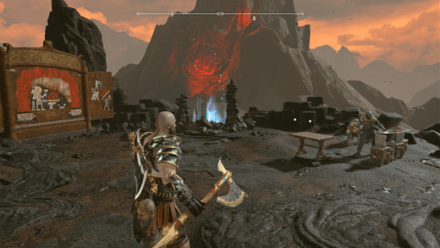 The first Mystic Gateway that players will come across is in the same area that they can find Brok's Shop outside of the Temple where they can Realm Travel. This Gateway, also known as the Arena 01 Gateway, can be unlocked by simply walking up to and interacting with it. 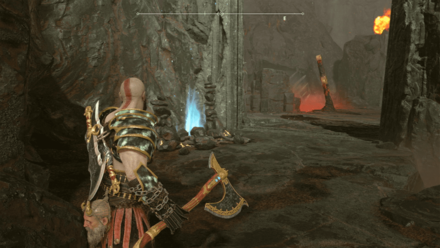 The second Mystic Gateway, Arena 02, can only be accessed by players once they finish the first of the Muspelheim Trials in Arena 01. From there, players will need to follow the path leading up to Arena 02, where the gateway will be outside of the arena. 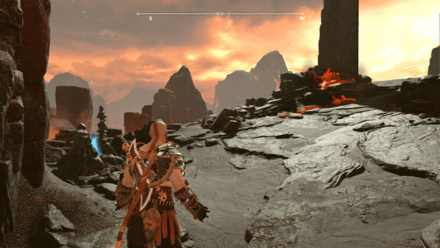 To get to the third Mystic Gateway, players must complete Arena 02 of the Muspelheim Trials. From there, follow the path up to the third arena, where the Gateway will lay outside of the challenge area. 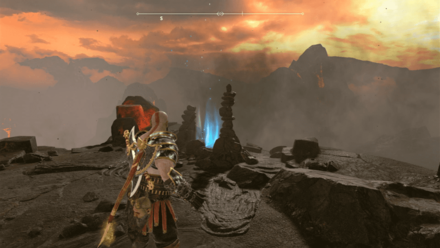 After completing Arena 03, a side gate leading up to Arena 04, with the gateway right next to the opened gate. 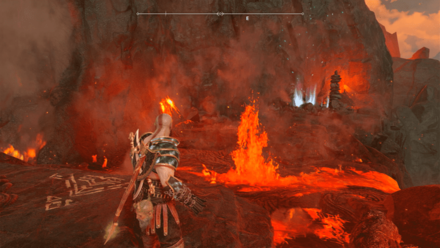 Accessible only after completing Arena 04, the gate will be in a small area you can jump over and across the lava flow after you climb up the mountain. 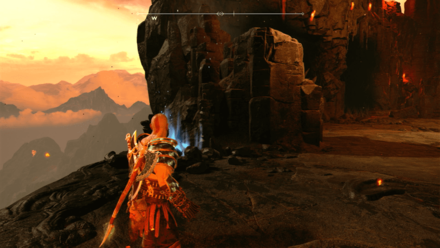 The last Mystic Gateway can only be accessed after defeating Arena 05. From there, ascene to the very top of the mountain – where Valkyrie Gondul is – where players will find the gateway directly inside of the arena itself. 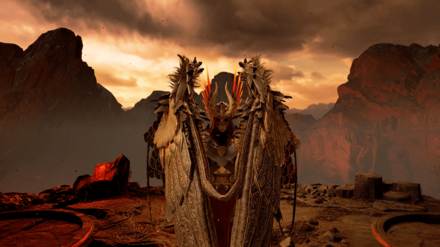 The lone Valkyrie that can be found in the realm of Muspelheim, Gondul can be found atop the mountain. Players must complete all of the challenges leading up to the mountain to be able to access Gondul's challenge arena.

How to Get the Fire and Brimstome Achievement 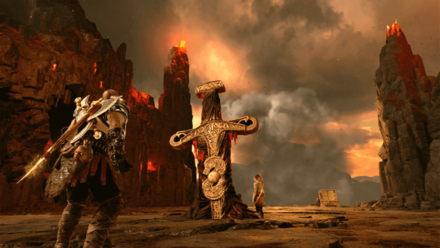 The Fire and Brimstone Trophy or Achievement is a rather difficult achievement to get, requiring a hefty amount of time to be spent towards playing through the difficult challenges in Muspelheim. It is recommended that players attempt this challenge at ~Level 7-8, although it is possible to get the achievement at a lower level.

The requirements to get the achievement are: 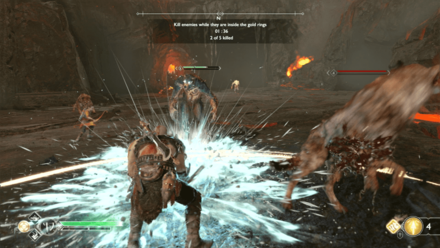 When players are going through each arena for the first time, they will first come across the "Base" challenges across all six of the challenge arenas. These arenas, barring Arena 06, will each have two trials – Normal and Hard Trials – that players must complete.

The first two trials you'll come across is a test of how much Damage-per-Hit a player can cause against enemies. It is recommended that players make use of Enchantments, Runes, and Armor pieces that increase the amount of damage they can dish out as well as assault enemies that are grouped together for fast and easy kills against multiple enemies at once.

Arena 02's trials all focus on a player's durability in combat. Having armor pieces such as the Traveler's Set increases the likelihood of a player managing to shake off successful enemy attacks, particularly on the Normal trial.

For the first trial, there is no simple way to "cheese" the fight – all players can do throughout much of the battle is to forego trying to cause damage against the "main" enemy and instead shift attention towards the smaller "regular" enemies first. This will knock out the main enemy's shields that will allow the player to cause it damage – repeat this process until the fight ends.

With the second trial however, it is recommended that players take on gear that increases their defense – from there, players will need to camp inside of the highlighted areas and wait for the enemy to come to them. Kills that occur outside of this area do not count, so ensure that all "last hits" occur largely within the circles.

Both trials in Arena 04 can be made simpler by having a lightning-based Runic Attack slotted with Atreus – simply fire this away to immmobilize enemies while leaving them with smaller health bars that allows the players to execute them quickly.

The first trial in Arena 05 is a simple test of DPS on the player's part – players will need to keep the timer above 0:00 across all three waves of enemies to complete the trial.

Arena 05's second trial is where things become difficult for the player – it is recommended that players, to avoid taking any sort of damage, make use of a Runic Attack that can immobilize groups of enemies for a time to remove the unecessary danger of receiving an attack all while trying to execute enemies. 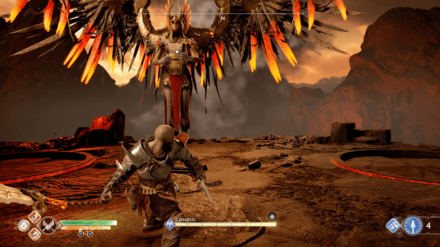 The last of the base trials that players will have to finish prior to unlocking the Impossible Trials is a tough matchup against Valkyrie Gondul. Gondul is a fairly mobile enemy, capable ot moving in between movesets, but with enough slowness that it allows players to sneak in attacks against it.

Gondul is also fairly vulnerable to staggering against a player's Runic Attacks – make heavy use of this, weaving in dodges to your moves whenever the Valkyrie takes flight. 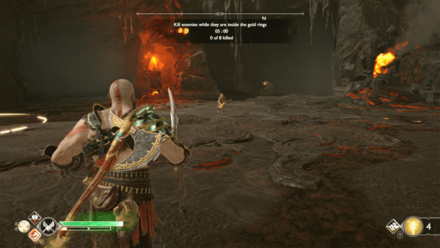 Relative to Surtr's Hidden Trials, players will need to collect 3 keys to be able to play through that challenge. This can be done by completing only 3 Impossible Trial arenas. To make things easier, it is highly recommended that players play through Arena 02, Arena 03, and Arena 05, as the other remaining challenges are extremely difficult, even for seasoned players.

Found in Arena 02, this trial is a fairly simple one that requires players to kill all enemies in the arena before the timer runs out. So long as players have their best gear equipped, they can easily breeze through this trial without much difficulty.

Similar to the Base Arena 03's Hard Trial, the Impossible Trial in this arena will largely consist of the same experience players will have in the Base Hard Trial. The tactics will remain the same – simply stay inside of the circle and execute enemies while inside. If needed, use your Blades of Chaos to drag opponents to you for a quick kill.

Like with Arena 03's Impossible Trial, Arena 05 will feature the Normal Trial found in the base Arena 05. Simply execute enemies one after the other to ensure that the timer does not fall to 0:00 – is it best to take care of the weaker enemies first before pouring all of the player's attention towards the tougher enemies that come in the second and third wave of the challenge. 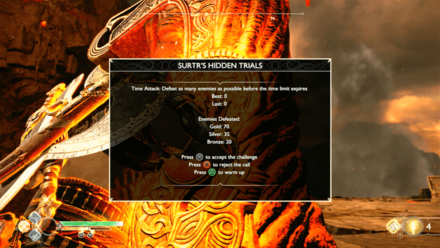 The last trial that players will need to accomplish in order to get the achievement is Surtr's Hidden Trials. The Trial can only be started when players have collected 3 Keys by completing three individual Impossible Trials – each batch of 3 Keys that you bring to the trial area will change what trial you will get, but for the most recommended one, it is best to aim for a Gold in the first trial presented to you.

The 8 minute trial will see you defeating enemies within the given time frame, with an achievement of a Gold rank resulting in the success of the trial and thus, an award of the Fire and Brimstone achievement.

The Trial itself is a simple challenge requiring players to execute a number of enemies within 8 minutes. Ranking for a player will depend on how well they do in the trial, with getting a Gold rank being what completes the challenge, providing the player with the achievement.

As a common theme across the challenges in the prior arenas, this challenge is a test of a player's DPS against enemies. The best way to quickly eliminate enemies is by stocking up on gear that enhances a player's overall damage output, and then executing attacks in-game that can deal large amounts of damage against enemies. Switch out to your Blades of Chaos for area-wide damage against groups of enemies that will attempt to gank you, as well as Heavy Runic Attacks with area effects.

Post (0 Comments)
Opinions about an article or post go here.
Opinions about an article or post
We at Game8 thank you for your support.
In order for us to make the best articles possible, share your corrections, opinions, and thoughts about "Muspelheim Region Summary | Fire and Brimstone Trophy Guide" with us!
When reporting a problem, please be as specific as possible in providing details such as what conditions the problem occurred under and what kind of effects it had.