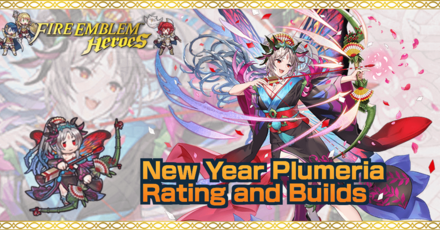 This is a ranking page for the hero Plumeria - Temptation Anew from the game Fire Emblem Heroes (FEH). Read on to learn the best IVs (Individual Values), best builds (Inherit Skill), weapon refinement, stats at Lv 40, and more for New Year Plumeria.

The best IVs for New Year Plumeria are +Atk and -Spd. A +Atk IV helps her increase the damage she deals using her First-Dream Bow. Spd is not important for her as it is very low and thus unreliable so it can be safely taken as a bane.

We recommend a +Atk IV when merging New Year Plumeria to 10. This is for the same reasons as above. At this range, she can definitely score some one-hits on some defensively weaker units. If you prefer Plumeria to be a bit more tanky, you can also go for a +Res IV.

New Year Plumeria's weapon cannot currently be refined. This section will be updated if it becomes refineable in the future!

New Year Plumeria is a ranged physical attacker (range = 2). Therefore, when not accounting for the Weapon Triangle, the amount of damage she deals will be equivalent to her Atk minus the foe's Def stat.

Sweet Dreams has targeting mechanisms that are much simple than Mirabilis' Whimsical Dream, but it is not less effective in inhibiting enemy teams. This makes it a perfect skill in modes like Aether Raids, Arena or Grand Hero Battles where every buff and penalty counts.

Can counterattack any magic attack and disables adaptive damage

It also disables adaptive damage which is very common on dragon units. This makes her a very strong matchup against said units!

This synergizes well with the effects of Quick Riposte 3 which makes her ver deadly against magic users even in the enemy phase! This is also available as a Sacred Seal if you need to use the B slot for another skill of choice.

Adaptive damage is when a skill allows a unit to calculate damage using the lower of a foe's defensive stats.

Atk/Def inflicted onto a wide area

New Year Plumeria's C skill, Atk/Def Rein 3 inflicts -4 Atk/Def on foes within 2 spaces during combat. It helps both New Year Plumeria and allies as the range is modest and it affects enemies even if Laevatein is not directly part of combat. Laevatein's flying movement makes it easy to position her in effectively utilizing this skill. It is an in-combat buff which makes it easy to stack with other debuffs such as Atk Ploy 3.

New Year Plumeria is one of the very few refresher-assist colorless bow flier. This allows her to fill in VERY specific niches in your lineups! We recommend against fodderring her because of this reason.

As a flying unit, New Year Plumeria takes 1.5x damage from bows and weapons effective on flying units. Be sure to keep them out of the range of archers and leave them to other units.
Heroes with Effective Skills

Should you Unlock Potential for New Year Plumeria?

Plumeria - Temptation Anew Only Appears as a 5 Star Hero!

New Year Plumeria can be used to inherit Close Ward or Atk/Def Rein 3. However, as stated, New Year Plumeria possesses a very unique combination of unit properties. She can fill in specific niches like no other unit can so please think carefully before fodderring her off!

How to Get New Year Plumeria / Illustrations / Voice Actor / Quotes

How to Get New Year Plumeria

New Year Plumeria is a limited time Hero who can be pulled from a Special Heroes Summoning Event. They do not appear in regular summons.

Register as a member and get all the information you want. (It's free!)
Login
Opinions about an article or post go here.
Opinions about an article or post
We at Game8 thank you for your support.
In order for us to make the best articles possible, share your corrections, opinions, and thoughts about "New Year Plumeria Builds and Best IVs" with us!
When reporting a problem, please be as specific as possible in providing details such as what conditions the problem occurred under and what kind of effects it had.