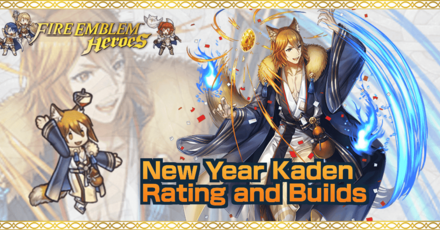 This is a ranking page for the hero Kaden - Refreshed Kitsune from the game Fire Emblem Heroes (FEH). Read on to learn the best IVs (Individual Values), best builds (Inherit Skill), weapon refinement, stats at Lv 40, and more for New Year Kaden.

We recommend a +Spd IV when merging Summer Joshua to 10. This is for the same reasons as above. If you prefer relying on skills and support to increase Kaden's Spd, you can go for a +Atk IV instead. This will allow you to focus on one-hitting opponents.

Spd also works well with Refreshed Fang's effects so read through the Strengths and Weaknesses section before deciding to go against this IV!

New Year Kaden's weapon cannot currently be refined. This section will be updated if it becomes refineable in the future!

New Year Kaden is a close physical attacker (range = 1). Therefore, when not accounting for the Weapon Triangle, the amount of damage he deals will be equivalent to his Atk minus the foe's Def stat.

Refreshed Fang deals bonus damage if New Year Kaden's Spd is more than his foes. The bonus damage is calculated by 70% of the difference in Spd. This maxes out at +7 damage, but it is pure damage meaning that it cannot be reduced by the foe's stats or color attribute advantage. Additionally, if Kaden is able to get a follow-up attack, this bonus damage is applied again. This means that this effect has a potential of dealing +14 pure damage.

Additionally, this skill grants Kaden +5 Spd and inflicts -5 Spd onto foe if foe's HP ≥ 75% so make sure to choose your targets carefully to make the most out of Kaden's attacks!

This effect is compatible with the Phantom Spd Sacred Seal that treats New Year Kaden as if she has +10 Spd whenever there is a Spd check.

Team gets a Spd boost on Even numbered turns

Kaden's default C skill Even Spd Wave will grant Kaden and adjacent allies Spd +6 on even numbered turns. Since this C skill actually gives the bonus to Kaden and not just his allies, his weapon, Refreshed Fang, can utilize its effects and add to his damage output in said turns.

Excels as a Support!

On top of Even Spd Wave 3's buffs, New Year Kaden can also inflict debuffs on enemies by using movement-assist skills. He has access to Swap by default, but you can freely change it. This is because Atk/Def Snag 3 inflicts -6 Atk/Def to enemies both near Kaden and the ally whom she uses a movement-assist skill on.

This means that Kaden can both be an attacker and a support unit.

New Year Kaden takes 1.5x damage from cavalry-effective weapons like Ridersbane or Rauðrwolf+, and one blow from this type of weapon is sure to take him down. Make sure you know what weapons you are up against before hopping too far into the line of battle!

New Year Kaden takes 1.5x damage from beast-effective weapons like Brave Eliwood's Nini's Ice Lance or Picnic Flora's Sæhrímnir, and one blow from this type of weapon is sure to take him down. Make sure you know what weapons you are up against before hopping too far into the line of battle!

Should you Unlock Potential for New Year Kaden?

New Year Kaden can be used to inherit the skill Atk/Def Snag 3. Please consider that New Year Kaden is a special hero whom you can only get from specific banners. Please think carerfully before fodderring him off!

How to Get New Year Kaden / Illustrations / Voice Actor / Quotes

How to Get New Year Kaden

New Year Kaden is a limited time Hero who can be pulled from a Special Heroes Summoning Event. They do not appear in regular summons.

Register as a member and get all the information you want. (It's free!)
Login
Opinions about an article or post go here.
Opinions about an article or post
We at Game8 thank you for your support.
In order for us to make the best articles possible, share your corrections, opinions, and thoughts about "New Year Kaden Builds and Best IVs" with us!
When reporting a problem, please be as specific as possible in providing details such as what conditions the problem occurred under and what kind of effects it had.