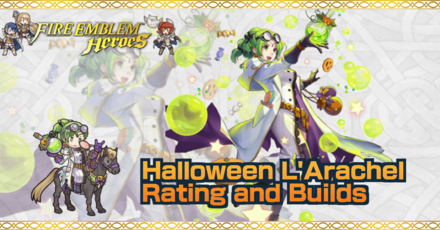 This is a ranking page for the hero L'Arachel - Harvest Princess from the game Fire Emblem Heroes (FEH). Read on to learn the best IVs (Individual Values), best builds (Inherit Skill), weapon refinement, stats at Lv 40, and more for Halloween L'Arachel. 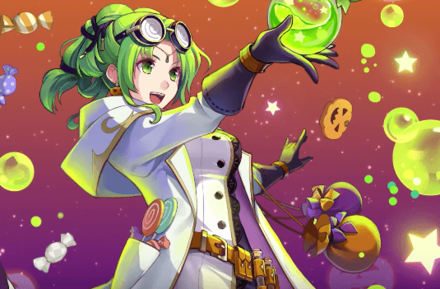 The best IVs for Halloween L'Arachel are +Spd and -Res. A higher Spd stat allows L'Arachel to get a ton of follow-up attacks on her foes. It also protects her from hostile follow-up attacks. Her Res of is less importance and thus safe to be taken as a bane. Be wary as her res is a superbane!

We recommend a +Spd IV when merging Halloween L'Arachel to 10. This is for the same reasons as above. With this IV, she will reach 41 Spd which is definitely at a fine level. With some investment and/or support from allies, she can nail follow-up attacks on a wide range of units.

Halloween L'Arachel is a ranged magic attacker (range = 2). Therefore, when not accounting for the Weapon Triangle, the amount of damage she deals will be equivalent to her Atk minus the foe's Res stat

L'Arachel's weapon, Madness Flask+, grants +3 Atk/Spd/Def/Res to L'Arachel. The downside to this is that it deals +6 damage to her every time she exits combat. You can leverage this damage by replacing Spd/Res Ruse 3 with a skill like Desperation 3. Check out the builds section to find out more.

Swift Sparrow 2 grants L'Arachel +4 Atk/Spd if she initiates an attack. This works well with the player phase nature of Halloween L'Arachel. It not only adds damage through the Atk bonus, but the Spd bonus also leads to more damage if she manages to score a follow-up attack. She will hit very hard if he manages to score a follow-up attack on an enemy. Of course, this stacks with the stats from Madness Flask+

Upgrade to Swift Sparrow 3 if you can afford to do so!

Halloween L'Arachel has a great assist skill in Rally Atk/Spd+. Primarily, it is a Atk/Spd buff that can be used on your allies to boost their Atk/Spd by +6. It interacts with L'Arachel's Spd/Res Ruse 3 to inflict huge debuffs on enemies. Both combined create a HUGE Spd gap that makes it easy for your allies to nail follow-up attacks on the enemy!

These buffs and the -Spd debuff can easily be exploited by a Blade tome unit like Tharja so it can be said that even base kit L'Arachel is already powerful ally to pair Blade tome units with.

It is also a high-SP skill so it can be definitely used to increase your score in the Arena.

Casts bonuses to allies while inflicting penalties on foes

With her assist skill Rally Atk/Spd+, Halloween L'Arachel can grant Atk/Spd+6 to her allies. Additionally, her B slot skill Spd/Res Ruse 3 will inflict Spd/Res-5 on foes in all cardinal directions of an ally who uses or receives a Rally Assist. With the combined effects of Rally Atk/Spd+ on an ally and Spd/Res Ruse 3 on a foe, an ally will be able to gain a follow-up attack on a foe even if their Spd was initially 6 points higher.

It also inflicts【Guard】to these enemies. This slows down their special triggers thus reducing the damage they deal.

Halloween L'Arachel takes 1.5x damage from cavalry-effective weapons like Ridersbane, and one blow from this type of weapon is sure to take her down. Make sure you know what weapons you are up against before hopping too far into the line of battle!

Should you Unlock Potential for Halloween L'Arachel?

L'Arachel - Harvest Princess Only Appears as a 5 Star Hero!

Halloween L'Arachel as a Source Hero

Halloween L'Arachel can be used to inherit the skills Spd/Res Ruse 3 and Rally Atk/Spd+. However, Halloween L'Arachel is a special hero that can only be obtained from specific banners. Please think carefully before fodderring her off.

How to Get Halloween L'Arachel / Illustrations / Voice Actor / Quotes

How to Get Halloween L'Arachel

Halloween L'Arachel is a limited time Hero who can be pulled from a Special Heroes Summoning Event. They do not appear in regular summons.

Register as a member and get all the information you want. (It's free!)
Login
Opinions about an article or post go here.
Opinions about an article or post
We at Game8 thank you for your support.
In order for us to make the best articles possible, share your corrections, opinions, and thoughts about "Halloween L'Arachel Builds and Best IVs" with us!
When reporting a problem, please be as specific as possible in providing details such as what conditions the problem occurred under and what kind of effects it had.