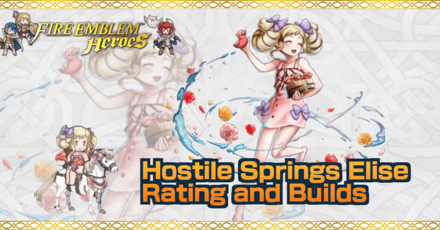 This is a ranking page for the hero Elise - Bubbling Flower from the game Fire Emblem Heroes (FEH). Read on to learn the best IVs (Individual Values), best builds (Inherit Skill), weapon refinement, stats at Lv 40, and more for Hostile Springs Elise.

The best IVs for Hostile Springs Elise are +Atk and -Res. She can reach high levels of Spd through her base stat and Swift Sparrow 3. A +Atk IV makes the most out of this high Spd of hers making it the best boon she can take. On the other hand, she can afford to take a bane in Res as this will balance it with her Def stat. Thus, it is the best bane she can take.

This build is very expensive, but it maximizes the Spd difference between Elise and foe. This helps her to score follow-up attacks and land flat damage with her weapon. You could also go for Atk/Spd Push 4 then get Desperation 3 in the B slot. Hone Cavalry can be taken in the C slot if you prefer.

This set maximizes Elise's Atk/Spd with a solo trigger condition. This is to make sure Red-Hot Ducks+ deal lots of flat, pure damage. If you prefer, you can also use Rein skills in the C slot. Maximizing Atk/Spd can be done in many ways, so be creative!

Hostile Springs Elise is a ranged physical attacker (range = 2). Therefore, when not accounting for the Weapon Triangle, the amount of damage she deals will be equivalent to her Atk minus the foe's Def stat.

Red-Hot Ducks+ deals bonus damage if Elise's Spd is more than her foes. The bonus damage is calculated by 70% of the difference in Spd. This maxes out at +7 damage, but it is pure damage meaning that it cannot be reduced by the foe's stats or color attribute advantage. Additionally, if Elise is able to get a follow-up attack, this bonus damage is applied again. This means that this effect has a potential of dealing +14 pure damage.

This effect is compatible with the Phantom Spd Sacred Seal that treats Elise as if she has +10 Spd whenever there is a Spd check.

Hostile Springs Elise's C skill Dagger Valor 3 will allow all dagger members on the same party to gain 2x SP. This will make building your other dagger units and learning their skills extremely quick and painless. If done on the weekends where a 2x SP multiplier is already in effect, or when a unit is receiving some kind of 2x bonus from an event or blessing, these bonuses stack, which will allow dagger users to gain a ton of SP in no time.

Hostile Springs Elise takes 1.5x damage from cavalry-effective weapons like Ridersbane, and one blow from this type of weapon is sure to take him/her down. Make sure you know what weapons you are up against before hopping too far into the line of battle!
Heroes with Effective Skills

Elise - Bubbling Flower Only Appears as a 5 Star Hero!

Hostile Springs Elise can be used to inherit the skill Rally Up Atk+. However she is a rare special hero that is only obtainable from specific gachas. Additionally, has Dagger Valor 3 that makes training dagger units more convenient. Please think carefully before fodderring her off for this skill!

How to Get Hostile Springs Elise / Illustrations / Voice Actor / Quotes

How to Get Hostile Springs Elise

Hostile Springs Elise is a limited time Hero who can be pulled from a Special Heroes Summoning Event. They do not appear in regular summons.

Post (0 Comments)
Opinions about an article or post go here.
Opinions about an article or post
We at Game8 thank you for your support.
In order for us to make the best articles possible, share your corrections, opinions, and thoughts about "Hostile Springs Elise Builds and Best IVs" with us!
When reporting a problem, please be as specific as possible in providing details such as what conditions the problem occurred under and what kind of effects it had.