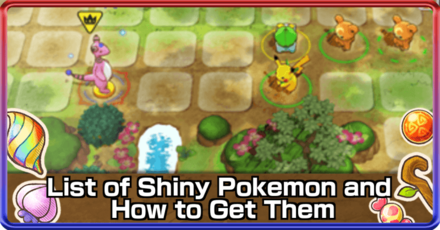 This page lists all the Shiny Pokemon you can encounter in the game Pokemon Mystery Dungeon: Rescue Team DX for Nintendo Switch. Read on to find out how to encounter Shiny Pokemon and how to get them on your team!

What is a Shiny Pokemon?

A Pokemon With a Different Color Scheme 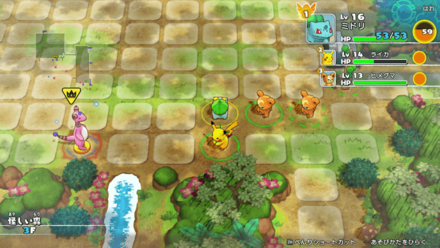 Shinies are Pokemon whose colors are different from the usual Pokemon.

While shinies are rather rare compared to regular Pokemon, they aren't any stronger than Pokemon of the same species and level. 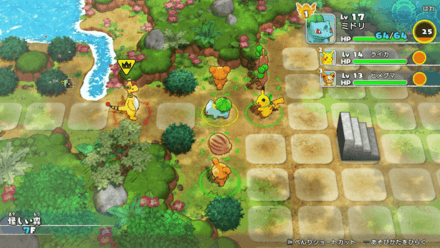 Shiny Pokemon tend to appear as Strong Foes in mystery dungeons. This also means that only a few kinds of Pokemon can be encountered as Shinies. For more information check out the article below.
List of Strong Foes and Rewards

How to Recruit Shiny Pokemon

You Need to Have Strong Pokemon

Since Shiny Pokemon tend to show up as Strong Foes, you're going to need a high-levelled team that can defeat them.

It hasn't been confirmed yet, but you might need to have a Friend Bow equipped in order to recruit Shiny Pokemon, especially since the Friend Bow's effect description explicitly mentions them.

However, even if it turns out that a Friend Bow isn't required to recruit Shiny Pokemon, we recommend having one equipped anyway as it increases the recruitment rate.

Other Conditions are the Same

Other than their color palette, every condition is the same with a Strong Foe pokemon of the same type. Equip a Friend Bow, hunt them down and they will join your team eventually.

List of Shiny Pokemon and Where You Can Find Them

See more comments (8 Comments)
Opinions about an article or post go here.
Opinions about an article or post
We at Game8 thank you for your support.
In order for us to make the best articles possible, share your corrections, opinions, and thoughts about "List of Shiny Pokemon and How to Get Them" with us!
When reporting a problem, please be as specific as possible in providing details such as what conditions the problem occurred under and what kind of effects it had.