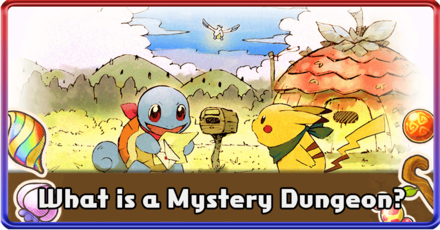 What is Mystery Dungeon? 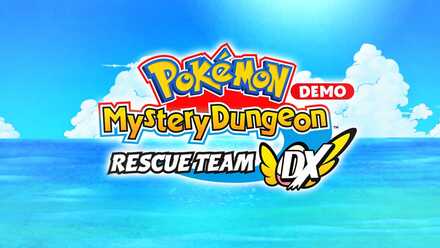 It is also considered to be under the 'Roguelike' category of games. Rougelike is a subgenre of RPGs that are similar to the 1980 classic, Rogue. Some of the main characteristics of a Roguelike game are the top-down view, turn-based combat, and raiding of randomly-generated dungeons.

Basics of the Mystery Dungeon Series

Explore the Deepest of Dungeons! 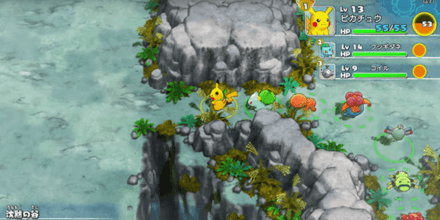 The main objective of the Pokemon Mystery Dungeon Series is to explore the deepest of dungeons. Each dungeon is composed of a specific number of floors and you have to make your way to either the deepest and darkest of dungeons or the highest and dreamiest of cloud castles.

Be warned, though—various traps, countless wild enemy pokemon and even other rescue teams will try and stop you from reaching your goal!

Hunger, HP and other Stats

The Pokemon Mystery Dungeon Series features the familiar stats from the main series games like PP, HP, Attack, and so on. It also features new stats such as Hunger, Rescue Team Rank, and more.

Hunger, measured by a Pokemon's Belly meter, is a feature that forces you to craftily manage your resources. Every action you do in dungeons costs some Belly points, similar to how Pokemon consume PP when using Moves. When a Pokemon's Belly runs out, it will take damage until it faints or eats something.

Do not fret as dungeons are usually filled with items that can fill your Belly bar up. You can also bring your own items before going into the dungeons. Some of the items that count as food even have other effects such as being teleported to a safe place or deal damage to the Pokemon in front of you! 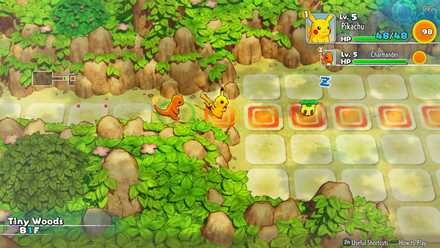 Main Series Pokemon fans will not be a complete stranger when first playing Pokemon Mystery Dungeon: Rescue Team DX as it features a similar combat system. Your band of Pokemon take turns trading moves with the hostile Pokemon in the dungeons you are exploring. Each step you take in the dungeon also count as a turn so your enemies can harm you from afar as you try and escape them.

The best way to explain it to someone familiar with the main series games is that it is similar to a Triples Battle where positioning is important, but you can also move around the while simultaneously battling other pokemon. Use positioning to your advantage!

Mechanics of a Mystery Dungeon 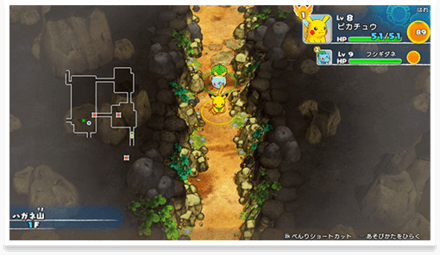 Each dungeon instance is unique. This means that the Pokemon, the Stairs, traps, and other elements are placed randomly. You can never memorize how a dungeon is built, so your ability to explore and fight through dungeons is tested every time. 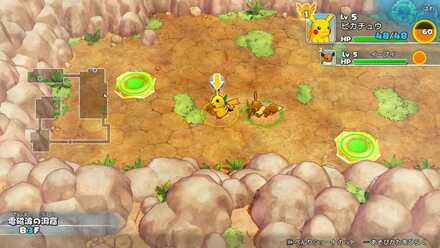 In the harder dungeons, you may find yourself accidentally stepping on invisible traps that hinder you and your team. You might get damaged, teleported, and have your stats lowered.

There are items and abilities that let you avoid these traps. You can even use traps against your enemies! 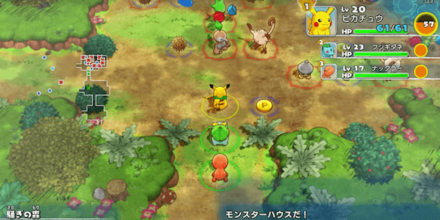 You may find yourself in a Monster House at times. Monster Houses contain a large number of hostile enemy Pokemon. You can either run from them or take them all down for a good chunk of EXP!

Scattered Items Throughout the Dungeons 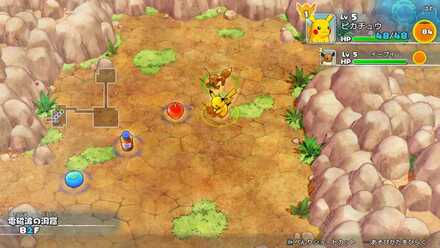 Dungeons are filled with items that can aid you with your exploration. Collect items from easier dungeons so you can raid the harder dungeons with ease!

Difficulty in the Deeper Parts of a Dungeon

The difficulty of the dungeon goes up as you go deeper into the dungeons. If you find yourself breezing easily through the early floors of a dungeon, don't be complacent as there are more obstacles that await your curious Pokemon Explorers.

Limited Number of Turns in a Floor

In addition to Hunger, you can only execute a certain number of turns in a floor. This ramps up the pace of your game and discourages you from camping for EXP from each of the floors. This creates the feeling of urgency. After all, you are in the dungeon to rescue Pokemon in need!

Features of the Mystery Dungeon Series

Recruit Pokemon to your Rescue Team! 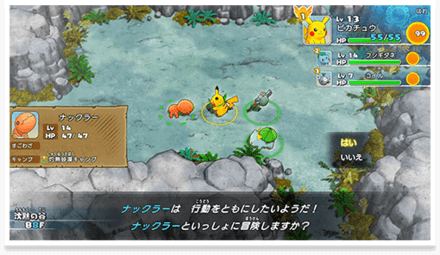 After defeating the hostile Pokemon, there is a chance that they will want to join your rescue team! Gone are the days of trying to Catch 'em All! Now we have to Befriend 'em All! 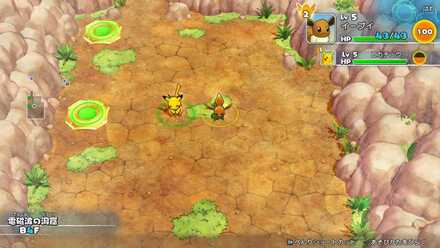 You can control your whole team as you explore the dungeons. If you need to execute more complex strategies, it is recommended to do this. In other cases, you can just let the AI control your companion Pokemon. They are designed to aid whatever you are doing.

The Dungeon Exploration Fails if the Partner Pokemon Faints

If either the Hero or the Partner Pokemon dies, the dungeon ends. However, if another ally faints, you won't be sent out of the dungeon. The fainted Pokemon will just retreat back to base, after which you can invite them along for the next dungeon instance.

Use Trickery to Defeat Enemy Pokemon! 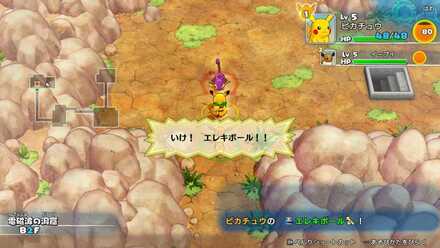 In addition to your Rescue Team's Moves, you can use various items to defeat hostile Pokemon. You can also lead them to traps, use moves like Roar to push them into lava or evade them by going to places only Pokemon with a specific type can go to!

The dungeon may be dangerous and scary, but you can use this to your advantage. 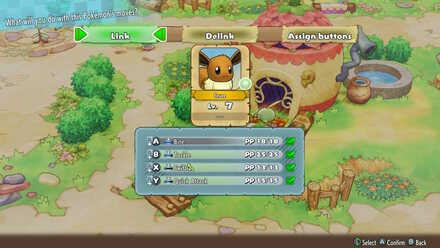 As in the original game, Linked Moves allow Pokemon to perform multiple moves in a single turn. However, this will come with additional costs to a Pokemon's PP and Hunger. Use it wisely! Go to Gulpin in the Pokemon Square to link your Pokemon's Moves!

If you fail raiding a dungeon, you can continue from where you fainted, unlike the previous Mystery Dungeon games. However, all money and items you are carrying wll be lost.

Mega Evolution and Other Additions! 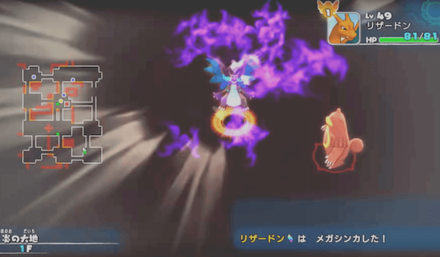 Now that Mega Evolution has been introduced to the Pokemon world, it now can be achieved in Pokemon Mystery Dungeon: Rescue Team DX. Stay tuned for more information on how this feature will come into play!

How to Mega Evolve Pokemon

Post (0 Comments)
Opinions about an article or post go here.
Opinions about an article or post
We at Game8 thank you for your support.
In order for us to make the best articles possible, share your corrections, opinions, and thoughts about "What is Mystery Dungeon?" with us!
When reporting a problem, please be as specific as possible in providing details such as what conditions the problem occurred under and what kind of effects it had.