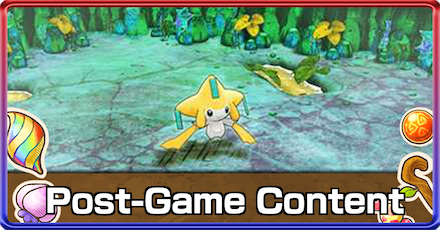 This is a guide to all features and Missions unlocked after the main story is completed. Read on to find out what features are unlocked and how to complete each post-game Mission.

What Happens After Beating the Game

Story Events will occur after the end of the game which give access to a variety of Legendary Pokemon. Each Pokemon which appears as a Boss will agree to join your team after you defeat them, so it's a good idea to go ahead and try these Dungeons right away after they are unlocked.

New Dungeons will appear with a much greater difficulty level than those found in the main Story. These include Dungeons with 99 floors, Dungeons where your whole party starts at Level 1, and more.

Over 400 Pokemon are available in Pokemon Mystery Dungeon DX. With no separation between Red and Blue versions this time, all Pokemon are accessible with a single copy of the game. Every Pokemon found in the game can be recruited, so long as you have the proper Rescue Camp, so be sure to purchase Camps ahead of time to make sure you can befriend any Pokemon.

Like the main series games, alternate colored versions of each Pokemon can be found in the game. Although these Pokemon can be encountered at a high rate as Strong Foes from early on, they do not become recruitable until completing the game, so be sure to finish the game quickly if you want to add Shinies to your team.
List of Strong Foes and Rewards 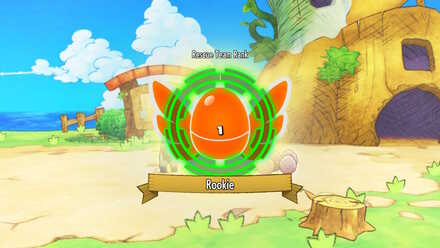 Lots of Pokemon are still needing to be rescued! Work your way up until the prestigious Master Rank! It is going to be tedious, but at least the variety of dungeons in the post-game will keep you entertained.

This content is continuing to be updated as we further explore the game.

How to Get Mew, Kyogre and the Regi Trio

This Mission will allow you to encounter the Legendary Pokemon Kyogre, as well as the three Regis, and recruit them into your team.

Mew will appear in an undetermined location from 36F to 99F of Buried Relic, and it's not certain it will be Recruited, so it can require a lot of patience to obtain. Be sure to purchase Mew's Rescue Camp before attempting this challenge!

How to Get Latios and Latias

How to Get Mewtwo, Ho-oh and the Legendary Dogs

Your meeting with Spinda will kickstart a whirlwind mission allowing you to meet all three Legendary Dogs, along with Ho-oh and Mewtwo, and recruit them into your party.

However, keep in mind that you cannot recruit the Legendary Dogs on the first time through this Mission, and must first finish Mt. Faraway and go through their Dungeons against to recruit them.

How to Get Lugia, Deoxys and Celebi

How to Get Jirachi, Gengar and Gardevoir

All Post-Game Dungeons and How to Unlock

Tips and Strategies for Post-Game Missions

Starting from the Rookie Rank, you can continue to climb in the ranks as you complete Jobs. This will increase the number of Pokemon you can recruit and the number of items you can hold, so it will help significantly in completing the post-game Dungeons.

See more comments (15 Comments)
Opinions about an article or post go here.
Opinions about an article or post
We at Game8 thank you for your support.
In order for us to make the best articles possible, share your corrections, opinions, and thoughts about "Post-Game Content Strategy & Walkthrough" with us!
When reporting a problem, please be as specific as possible in providing details such as what conditions the problem occurred under and what kind of effects it had.