This is a page about the Dungeon Buried Relic in the game Pokemon Mystery Dungeon: Rescue Team DX for the Nintendo Switch. Read on for information about its boss, the number of floors and which Pokemon can be found here. 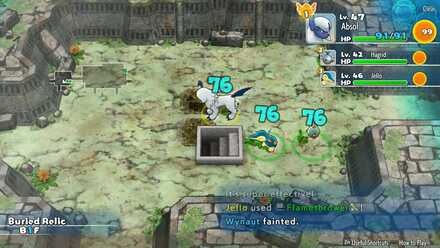 This is in addition to the always needed Apples, Oran Berries and Tiny Reviver Seeds

Flygon is a powerful Pokemon which has Levitate. It can also learn Earth Power and Heat Wave which are very powerful moves in the dungeon.

When you find a stranded Pokemon in the Dungeon, giving them an Apple will cause them to definitely join your team, so bring plenty of Apples with you into the Dungeon to ensure that you can recruit as many friends as possible.

Regirock is around Lv. 35, so if you have Pokemon around Lv. 40, then you will no have problem with it. You can use items like Petrify Orb or Slumber Wands to limit Regirock's offensive prowess. Use Special attacks to work around Regrirock's high Def.

Regice also appears to be around Lv. 35. If your Pokemon are around Lv. 40, then you should have no problem with it. Try to use Physical attacks to get around Regice Sp Def. Use Orbs to limit Regice.

Registeel also appears to be around Lv. 35. If your Pokemon are around Lv. 40, then you should have no troubles with it. This battle is fought in an open space so you can use range attacks to fight it. Do not forget to use Orbs to limit Registeel.

Golem starts appearing at 90F. It is important to take Golem out as soon as possible as Magnitude can damage every one of your Pokemon.

Take Wobbuffet out at range so that it cannot damage you using these two moves.

Machoke and Makuhita's Guts can be deadly

If you inflict a status condition on both of them, their attack will raise thanks to Guts. Avoid doing so as a Guts boosted Pokemon can knock you out easily.

Post (1 Comments)
Opinions about an article or post go here.
Opinions about an article or post
We at Game8 thank you for your support.
In order for us to make the best articles possible, share your corrections, opinions, and thoughts about "Buried Relic Dungeon Strategy Guide and Encountered Pokemon" with us!
When reporting a problem, please be as specific as possible in providing details such as what conditions the problem occurred under and what kind of effects it had.