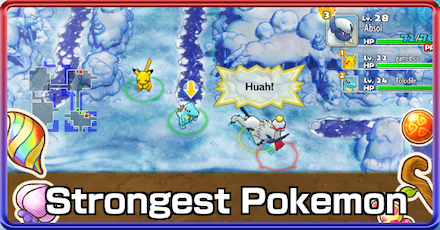 This page explains which Pokemon are best to use each point in the story in the game Pokemon Mystery Dungeon: Rescue Team DX for the Nintendo Switch. Read on for explanations on each of these Pokemon's strong points and how to use them on your team.

Best Pokemon in the Early Game

Can use the powerful Fury Swipes

As these Pokemon both hold the Normal typing, they are able to use the relentless multi-hit attack Fury Swipes with STAB*. This makes these Pokemon invaluable as partners both while crawling through Dungeons and all the way up to the Boss fight.

If you recruit one of these Pokemon, and it doesn't know Fury Swipes, either its level is still too low to learn the Move, or it has passed the level needed to learn the Move, and already forgotten it. In the former case, level it up until it learns the Move, and in the latter case, visit Gulpin in Pokemon Square to have the Pokemon remember the Move.

*STAB (Same Type Attack Bonus) boosts an attacks' power by 1.5x when used by a Pokemon whose type matches that of the Move.

These Pokemon also share the Ability Pickup, which allows them to obtain Items randomly throughout a Dungeon. However, be aware that Abilities are randomly determined, so the Teddiursa or Linoone you obtain may not have the Pickup Ability.
List of Abilities

Go to its page to see Magnemite's ideal moveset!

Joins your team as part of the Story

Magnemite will join your team on its own after Mission 3, taking place at Mt. Steel. It has few weaknesses and is able to deal heavy damage, and can deal damage even from the back of the line with its ranged attack Signal Beam. We recommend using Magnemite in any case when your starter is not Pikachu, and even together with Pikachu it can still be a valuable member of the team.
Mission 3: Rescue Diglett at Mt. Steel Story Walkthrough

Best Pokemon in the Middle Part of the Game

A strong Starter and Partner are key


For Partners, Skitty or Meowth are strong options. Skitty can deal super-effective Electric damage with Charge Beam or Thunderbolt, and multi-hit damage with Double Slap. Consider using Skitty if you didn't choose Pikachu as a Starter.

On the other hand, Meowth is a great support player, dealing multi-hit damage and collecting useful items with Pickup. As you have few options to buy or farm items in this part of the game, Meowth's Pickup skill can help you maintain a solid stock.

Best Pokemon Later in the Game

Go to Absol's page to see its recommended moveset!

Starts off with a high Level

When you first meet Absol, it is already at Level 28, compared to your Starter and Partner Pokemon which may be somewhere from Level 22 to 26 at this point. In addition, its Stats, in particular its Attack, are high, and can be used with the powerful Physical Moves it already knows to smack down foes. Even after returning to Pokemon Square and regaining access to other Pokemon, Absol is a strong choice to keep around in your main team.

Joins your team as part of the Story

Absol will join your team on its own after Mission 9, taking place at Frosty Forest. Absol's addition to the party will come with a warm welcome from players who have been struggling with using only their Partner and Starter for the previous several dungeons.
Mission 9: Vs. Articuno at Frosty Forest Story Walkthrough

Pokemon That Can Use Ranged Attacks

Although Absol is a highly powerful attacker, it lacks the ability to use ranged attacks. If you'd prefer a third member who can stay in the back and continue attacking, consider a Pokemon which can use attacks like Psybeam, Signal Beam and Razor Leaf.

The Sky Tower is filled with opponents who are weak to Ice-type Moves. Foes such as Flygon and Masquerain will take super-effective damage from Ice, and the Dragon/Flying-type Boss Rayquaza will take double super effective damage (1.4 x 1.4). Returning to Frosty Forest or Mt. Freeze to recruit an Ice-type Pokemon will make the last part of the Main Story much easier to deal with.

Out of all these Pokemon, Cloyster deserves a special menton because of its ability, Skill Link. This makes the already powerful Icicle Spear more powerful as Skill Link enables it to hit 5 times always.

Cloyster can be rescued in Magma Cavern.

If you do not have access to these Pokemon, just settle with Pokemon that have long Ranged attacks such as Quick Attack and Razor Leaf. Having these moves allow you take out enemy Pokemon while sustaining minimal damage.

Best Pokemon for the Post-game Dungeons

Go to Cloyster's page to see its recommended movesets!

Cloyster is extremely powerful with Skill Link as it improves the already strong move Spike Cannon and Icicle Spear. If Cloyster or any Pokemon in your team has Rapid Bull's-Eyes, then it can be considered one of the most powerful Pokemon in the game.

In addition to Spike Cannon and Icicle Spear, Cloyster also has Hydro Pump, Blizzard and Shell Smash. This makes Cloyster one of the best Pokemon in room clearing and overall dungeon runs.

Go to Marowak's page to see its recommended movesets!

These Pokemon can learn both Heat Wave and Earth Power. These two moves allow them to deal damage to the enemies in the same room. Earth Power also has a type advantage against the Fire Pokemon in Fiery Field.

With an Empowerment Seed, Camerupt can Mega Evolve. This allows him to clear with Earth Power and Heat Wave with more ease.

Like Cloyster, Magcargo and Torkoal can learn the powerful stat-boosting move, Shell Smash. Be careful when using Shell Smash as it also lowers your Sp. Def and Def.

Both Pokemon can learn Blizzard, Ice-Beam, Water Pulse and Earth Power that help conserve HP by taking out Pokemon at long-range.

Due to the cost of these TMs, it is better to build these Pokemon in the late game when you have abundant resources.

With an Empowerment Seed, Swampert can Mega Evolve. This allows it to clear with Earth Power and the other moves with ease.

This skill allows Quagsire to be immune to Water moves. He can soak up a lot of damage for the team if you chose him to be the leader of the party.

These Pokemon learn at least two moves that are either Long-range or Room-wide. Moves with those characteristics are especially important in the post-game dungeons.

Due to Zapdos' size, it can hit multiple targets with moves that are normally single target. Consider this in your strategy when using a Zapdos. This makes powerful moves like Thunder, Thunderbolt and Ancient Power even more powerful.

See more comments (5 Comments)
Opinions about an article or post go here.
Opinions about an article or post
We at Game8 thank you for your support.
In order for us to make the best articles possible, share your corrections, opinions, and thoughts about "Best Pokemon for the Story" with us!
When reporting a problem, please be as specific as possible in providing details such as what conditions the problem occurred under and what kind of effects it had.