★ Game8's Pokemon Scarlet and Violet Wiki is live!
Check Game8's Guide for all your needs at lightning speed! 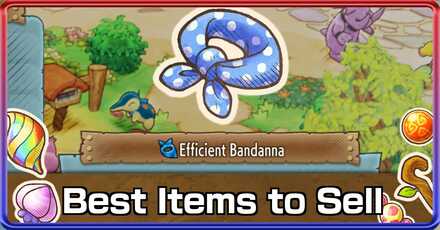 This article guides you on which items are good idea to sell on the game Pokemon Mystery Dungeon: Rescue Team DX on the Nintendo Switch. If you need Poke but have extra Scarves, Bandannas or TMs, click here to know which ones to sell.

No Use Besides Selling!

These two items have no use besides having a high sell price. Don't hesitate to sell both if you have them!

Efficient Bandanna and Other Held Items 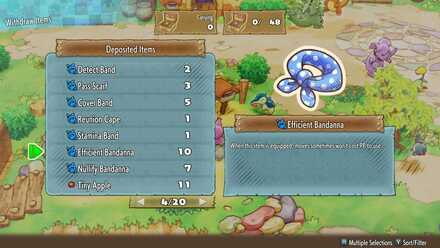 Efficient Bandannas seem to be really common among all the dungeons. Don't get us wrong, they are pretty useful! In our case, we seem to be using them on every dungeon that has more than thirty (30) floors, we just bring the combat-centered Held Items with us to switch to once we arrive at the boss.

The thing with Efficient Bandannas other than its abundant supply is its high sell price of 700! That is an anomaly compared to the other Bandannas or Held Items. We recoommend keeping around five (5) and selling whatever exceeds that amount.

You sometimes get a Munch Belt by helping Munchlax in the Pokemon Square when he appears. If you don't have a use for them, sell them.

These Held Items are fairly common but not as common as Efficient Bandannas and not as expensive as them. If you have a high supply of them, consider selling them.

If you don't plan on selling the TMs you sometimes get from dungeons, sell them instead. Dungeons like Unown Relic are sure to give you a TM by clearing it. In Unown Relic's case, its the Hidden Power TM that sells for a fair 440 Poke.

We find Link Boxes useful as we only prefer using Linked Moves during boss fights. We like running dungeons with normal moves. If you prefer having pre-Linked moves before going to a dungeon, you should sell them instead for they have no other use.

It might be a good idea to sell items that accumulate such as Max Elixirs and Ethers but that would sometimes take too much time and raiding a dungeon to complete a job would be a smarter option.

Items that stack like Gravelerocks and Spikes can be sold quickly, but they don't really have that much value.

In order for us to make the best articles possible, share your corrections, opinions, and thoughts about 「Best Items to Sell | Pokemon Mystery Dungeon DX Switch」 with us!