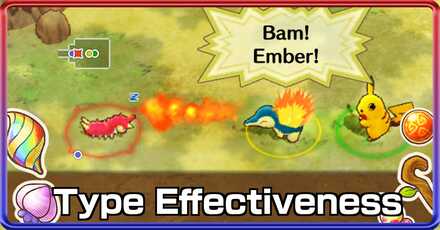 This page is a guide on how type effectiveness works in the game Pokemon Mystery Dungeon: Rescue Team DX for Nintendo Switch. Read on to learn about the type chart, the mechanics of type effectiveness, and STAB.

What Is Type Effectiveness?

Knowing about these type match-ups and using this system effectively could be the key to your success in the different mystery dungeons, so please read on!

How Does Type Effectiveness Work?

Type Effectiveness comes into play whenever you or the enemy Pokemon uses an attacking move. The game considers the attacking move's type and the target's type combination to determine what kind of damage the move will do.

In most cases, the move will be normally effective and deal a normal amount of damage. However, based on the type match-up, the move can be super effective, not very effective, or ineffective.

If Cyndaquil uses Ember, a Fire-type move, on a Bug-type Pokemon like Wurmple, the move will be super effective! This means that the move will deal 1.4x more damage than it normally would.

While it feels great to deal super effective damage, remember that enemy Pokemon can also deal this kind of damage, so be careful!

If Sunkern uses Absorb, a Grass-type move, on a Fire-type Pokemon like Cyndaquil, the move will be not very effective. This means that the move will only deal 0.7x the damage it normally would.

Try not to catch yourself using not very effective moves!

If Cubone uses Bone Club, a Ground-type move, on a Flying-type Pokemon like Pidgey, the move will be ineffective. This means that the move will only deal 0.5x damage, so try not to use ineffective moves if you can help it.

STAB is an acronym that stands for Same-Type Attack Bonus and is a powerful buff similar to super effective moves. This bonus applies when a Pokemon like Cyndaquil (a Fire-type) uses a move it shares a type with like Ember (a Fire-type move).

With STAB, the Pokemon will deal 1.5x damage on top of any modifiers that come with the type match-up! Try using STAB moves as much as possible!

Register as a member and get all the information you want. (It's free!)
Login
Opinions about an article or post go here.
Opinions about an article or post
We at Game8 thank you for your support.
In order for us to make the best articles possible, share your corrections, opinions, and thoughts about "Type Effectiveness" with us!
When reporting a problem, please be as specific as possible in providing details such as what conditions the problem occurred under and what kind of effects it had.