This is a guide on how to get Pokemon to join you in Pokemon Mystery Dungeon DX for Nintendo Switch. Here you can find tips on how to best recruit Pokemon and what Items, Rare Qualities and Equipment to use.

Best Friend Pokemon for the Story

Outside of recruitment as part of the story, all Pokemon are recruited by one of the methods below.

Keep in mind that Pokemon can only join your team if you have the required Rescue Camp.

The most common method for recruiting Pokemon is to defeat them in Dungeons. Sometimes, when you defeat a foe, they will be impressed and decide to join your team.

If you don't have the camp necessary for the Pokemon to stay with you once you clear or leave the Dungeon, the Pokemon will only join you temporarily for the current adventure, then leave at the end, so make sure to build the camps ahead of time if you want to permanently add new members to your team.

Pokemon Can Join if Defeated by Ranged Attacks

If you defeat an enemy Pokemon with a long-ranged attack, you still have a chance to recruit it! However, there might be a limit to how far away you can be, so we recommend getting close when attempting to befriend Pokemon.

You can also recruit Pokemon by completing their jobs. Sometimes, after you've completed a job, the Pokemon who requested it will decide to join you.

If you're just looking to recruit new Pokemon to your team, this is a good method to use, as completing jobs has benefits on its own. However, if you're looking for a specific Pokemon, it's a lot more efficient to simply search for those Pokemon in Dungeons.

Occasionally, you will find fainted Pokemon during your adventures. If you feed these fainted Pokemon apples, they are guaranteed to join your team, so make sure to always have a few extra apples on hand just in case.

Recruit Pokemon at a Mystery House 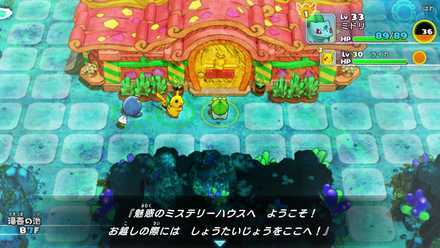 When you enter a Mystery House, you'll occasionally find friendly Pokemon that are willing to join your team. These Pokemon are often rare and hard-to-find, but you won't know who you'll get until you enter the Mystery House.

An Invitation is Required

How to Recruit Pokemon Easily

Have the Friend Bow Equipped

Considering that the Friend Bow increases the recruitment rate when the leader has it equipped, make sure that you have it equipped when you're out looking for new Pokemon to add to your team.

Use an Inviting Orb

If you don't have either of the Rare Qualities we talked about above, you could also just use Inviting Orbs, which have a similar effect!
List of Orbs

How to Recruit Shiny Pokemon

You Need the Friend Bow

In order to recruit any Shiny Pokemon, you'll need to have a Friend Bow equipped on your team's leader.
How to Get the Friend Bow

Post (2 Comments)
Opinions about an article or post go here.
Opinions about an article or post
We at Game8 thank you for your support.
In order for us to make the best articles possible, share your corrections, opinions, and thoughts about "How to Recruit Pokemon Easily" with us!
When reporting a problem, please be as specific as possible in providing details such as what conditions the problem occurred under and what kind of effects it had.