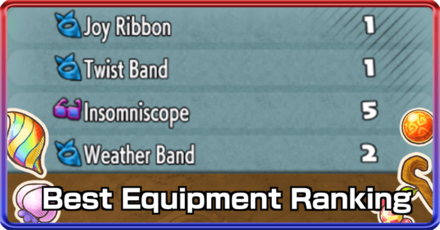 Here you can find the strongest and best Equipment in the game Pokemon Mystery Dungeon Rescue Team DX. Whether it's for bosses, dungeons or befriending Pokemon, you can find our recommendations in the lists below!

Equipping X-Ray Specs allows you to see items on the floor and the location of enemies. You can prepare for battles and won't walk around in vain or miss items. In later dungeons, these Specs are vital.

The Efficient Bandanna has a chance of preventing PP from being used when you use a move. That means you won't have to worry as much about PP running out, not only in the early stages of the game where there are few items, but also in the long dungeons in the second half.

When equipped, Fierce Bandanna increases both Attack and Special Attack. This makes it a lot more versatile than Power Band and Special Band, and it's also easy to obtain.

See more comments (10 Comments)
Opinions about an article or post go here.
Opinions about an article or post
We at Game8 thank you for your support.
In order for us to make the best articles possible, share your corrections, opinions, and thoughts about "Best Equipment Ranking" with us!
When reporting a problem, please be as specific as possible in providing details such as what conditions the problem occurred under and what kind of effects it had.