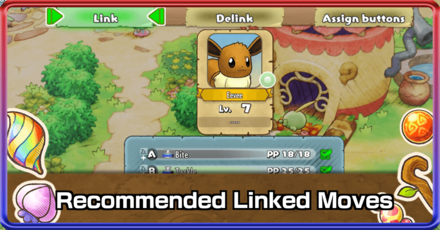 This page lists our recommended Linked Moves for efficient and effective dungeon runs on the game Pokemon Mystery Dungeon: Rescue Team DX for the Nintendo Switch. Linked Moves are a unique feature offered by the Gulpin NPC in the Pokemon Square. 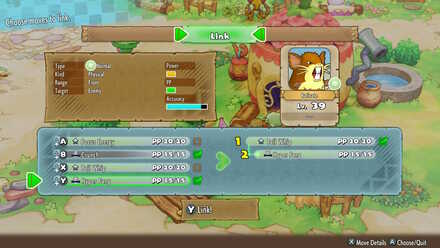 One option would be first a move that lowers Def or Sp. Def like Tail Whip, followed by a damaging move like Frustration. This is a good strategy in boss battles or against Strong Foes because all your Pokemon can take advantage of the lowered defenses of the opponent.

Moves that lower defenses, aside from the mentioned Tail Whip, are Fake Tears and Acid. 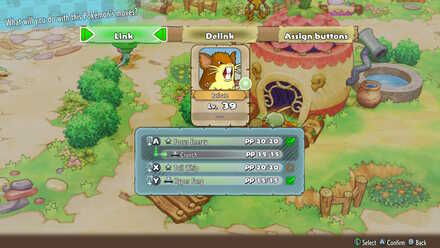 Another option would be starting with a move that buffs your offensive capabilities, like Focus Energy or, then placing second a damaging move like Double Edge. This is good when fighting multiple enemies as the buffs linger even if one Pokemon is defeated.

Moves that Strengthen Atk. or Sp. Atk are Charge, and Swords Dance, and the beforementioned Focus Energy.

Not all linked moves have to deal with raising attack or lowering defense. Some moves just naturally go well together.

The already powerful multi-strike Rollout becomes even more powerful after you use Defense Curl, so consider linking these moves together.

Give yourself one free hit by using Protect right before hitting the enemy with an attacking move! Take note, however, that this won't work all the time as the chances of Protect failing increase the more you use it.

This combo is a great way to deal with enemies as they won't be able to attack you from a distance. Try linking moves like Quick Attack, Ember, Flamethrower, Bubble, Water Pulse, or Ice Beam together!

How to Link Moves

Gulpin in the Pokemon Square can Link your moves for free! He can also teach you moves that you have forgotten.

How to Link Moves

You can use Link Boxes found in dungeons to Link Moves even inside dungeons.

How to Get Link Box

Register as a member and get all the information you want. (It's free!)
Login
Opinions about an article or post go here.
Opinions about an article or post
We at Game8 thank you for your support.
In order for us to make the best articles possible, share your corrections, opinions, and thoughts about "Best Linked Moves" with us!
When reporting a problem, please be as specific as possible in providing details such as what conditions the problem occurred under and what kind of effects it had.