Game Review and Impressions: Is It Worth It? | Pokemon Mystery Dungeon: Rescue Team DX Switch 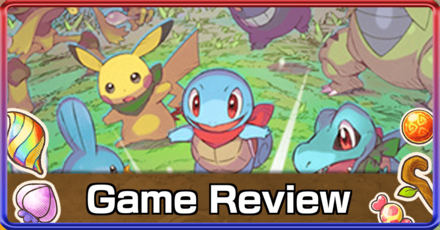 This page contains Game8's review and impressions on the Nintendo Switch game: Pokemon Mystery Dungeon: Rescue Team DX. If you are trying to decide whether to buy the game or not, this article might help you! 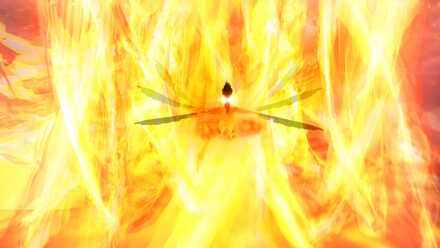 The watercolor-inspired artstyle of Rescue Team DX is simply amazing! It brings so much life to the characters that we all know and love. However, where the art style really shines is in the cutscenes, whether it be a conversation between Pokemon or the entrance sequence of the bosses! Our favorite is the latter—it gets us all fired up for the boss fight.

If you had shown us the cutscene snapshot above a year ago and told us it was it was from a future remake of Pokemon Red and Blue Rescue Team, we would not have believed you. 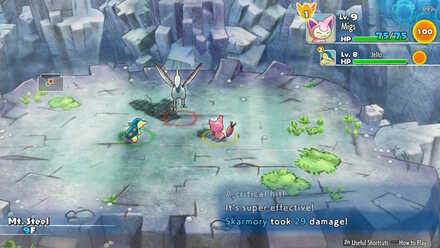 Now that the assets are in 3D, a lot has changed. Of course assets are still being reused, but the switch to 3D has made us feel a literal craving to explore the dungeons. Getting tired of the scenery in Red and Blue might have mostly happened when you were grinding end game dungeons over and over, but in Mystert Dungeon DX you can enjoy the beautiful and varied dungeons whether you're a casual player or a completionist! 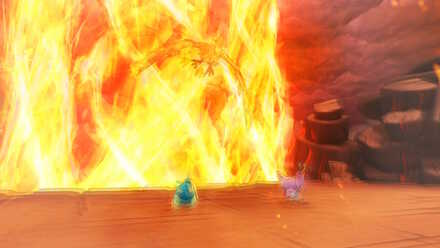 We all know that there is a special relation between music and emotion. With this game being a link to our innocent childhoods, they had to get the music right! To eveyone's delight, Rescue Team DX does not disappoint with its music and sound. You'll once again hear the familiar tones that accompanied you in your dungeon adventures a decade ago.

The upgraded sound quality on the Nintendo Switch ensures that even the first three notes of a track are sure to send you straight to the nostalgia you have been craving all these years. 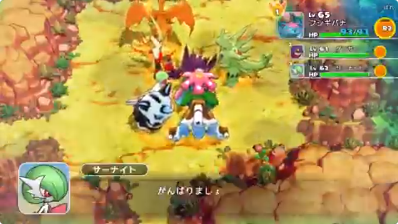 All Pokemon now start with a balanced movepool of four moves! This makes it easier for us in the early game as you now can cover a lot of types. Your starting moves can also grow in Power, Accuracy and PP with the new Move Growth System. 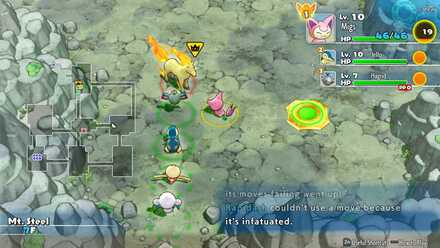 The chance to recruit Pokemon seems higher now. Many Pokemon who were not available for recruitment back in the originals can now be recruited even in early stages of the game. In a dungeon, you can have up to eight (8) Pokemon in your team. This means that you can take a whole battalion of Pokemon with you before you face the boss in that dungeon! 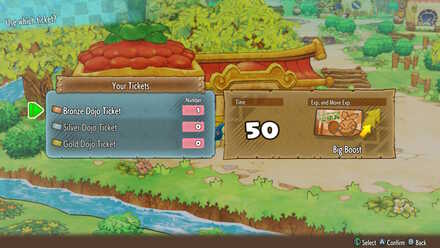 The Makuhita Dojo is now more efficient. You will spend time training here as it has been fully revamped.

For tips on how to use the Dojo efficiently, check out the guide below.

Taking into consideration that the originals were quite hard and tedious sometimes borderline unenjoyable—Rescue Team DX is not TOO Easy.

The features were designed in such a way to make the game more fun. The game being slightly easier is just a side effect. You will be thankful to have the new features rather than feel being spoiled.

Especially older players who are considering playing the remake to relive some glorious dungeoneering days might appreciate how much more accessible the game is now.

There is plenty of challenging end-game content too, so we are confident that anyone get a challenge just right for them and enjoy the game. 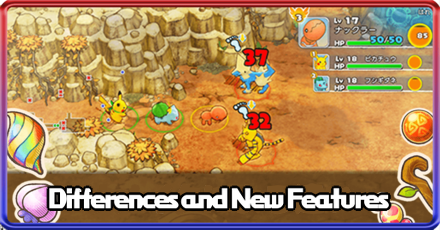 To find out more about the new features that make the game more accessible, check our our article below! 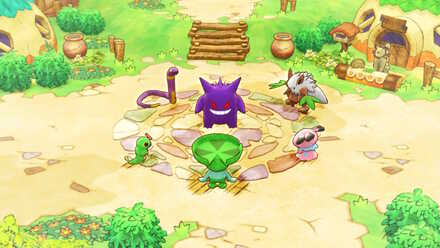 Despite the graphics having changed drastically, Pokemon Square manages to capture the atmosphere of the original perfectly, and we believe this is something the game does well in all areas, whether it's graphics, characters or gameplay. Which brings us to... 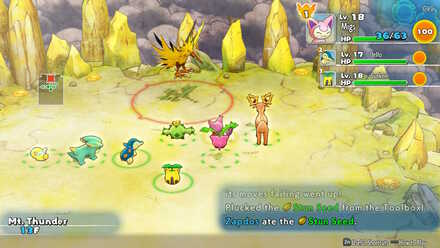 Many of the game's mechanics have stayed truthful to the originals. Tiny Woods still feels like the stroll in the park like it was years ago and Magma Cavern still gives us the anxiety it did years ago.

Even having the HP bars for Pokemon hidden has not been changed. While this might be annoying to some players, we find it nice for the boss battles as it keeps that feeling of uncertainty of victory throughout the battle.

To learn more about the game's mechanics, you can check out our section on it below.
Game Mechanics 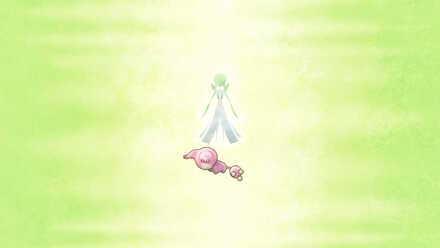 The whole reason the originals made us feel a connection to the characters (and even cry!), was that the Pokemon were made human-like. Yes, the main hero is a human-turned-Pokemon, but for the story to work the Pokemon had to behave like humans. They had facial expressions, they talked like humans, they joked like humans and they felt emotion like humans.

Now that the characters and the whole world is in 3D, we are able to sympathize with all the Pokemon world a lot more! As we pointed out time and time again, prepare for this epic nostalgia trip! 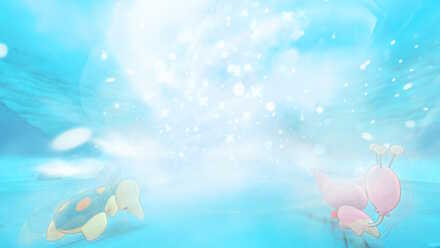 The sound effects that came in with the cutscenes are amazing. If you had earphones on while the various bosses were either screeching or roaring and flexing their mighty elemental powers, you know what we mean. Get ready to be immersed in this Pokemon world if you have not started the game already! 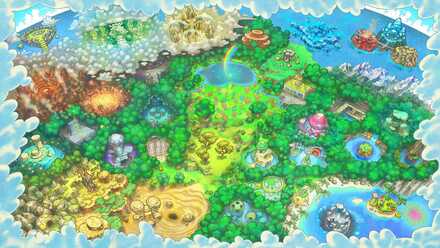 One of the things that we enjoyed during our time in Red and Blue Rescue Team was the ability to visit our friends in their respective friend areas. To visit Rayquaza in Stratos Lookout or Jirachi in Mt. Moonview was the 2000s cyberworld equivalent of vibing. 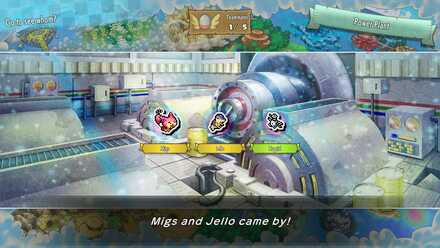 However, we are very sad to say that this feature is no longer available in Rescue Team DX. You can still recruit Pokemon into your team, but we are only able to visit them through this menu—if this even counts as visiting. 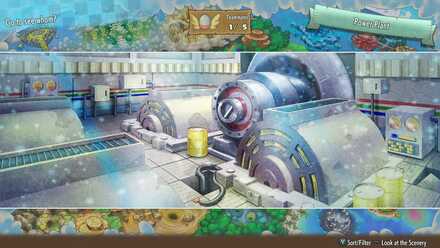 We do understand that creating 3D friend areas is a lot of work for a cosmetic feature, so we won't let it detract too much from our overall impression. While it was quite fun to visit those places back in the day, it was the Pokemon who helped us in our battles who matters in the end. 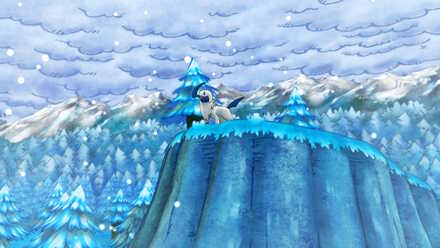 To us, Pokemon Mystery Dungeon: Rescue Team DX is a must buy for fans of the series! Not only is it a great remake that gives the originals a fair amount of justice, but it is an emotionally-packed nostalgia trip as well. There are only a few things is better than playing an enjoyable game with characters that you met during your childhood in stunning 3D watercolor graphics that go oh so well with the original soundtrack!

However, we also strongly believe that newcomers or fans of the main Pokemon series would enjoy this fun, both light and dark adventure. So if you are considering buying it, we recommend playing the demo and dive in!

The only thing that could keep you from buying the game is its pricetag. Considering that it is a remake, 60$ may be a bit much. However, we still think it is a game that is worth buying. It has weeks of content and many added features to justifies its price point.

What are you waiting for?! The world needs saving AGAIN! Get your copy now and start on crawling in on those endless dungeons!

See more comments (16 Comments)
Opinions about an article or post go here.
Opinions about an article or post
We at Game8 thank you for your support.
In order for us to make the best articles possible, share your corrections, opinions, and thoughts about "Game Review and Impressions: Is It Worth It?" with us!
When reporting a problem, please be as specific as possible in providing details such as what conditions the problem occurred under and what kind of effects it had.