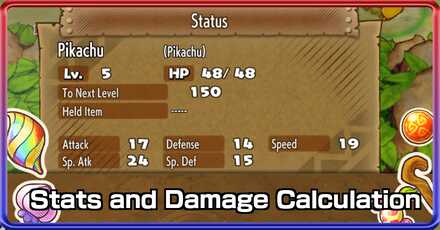 This page is about the different stats a Pokemon can have and how move damage is calculated in the game Pokemon Mystery Dungeon: Rescue Team DX for Nintendo Switch. Read on to learn how different stats affect a Pokemon and how damage calculation works in this game. 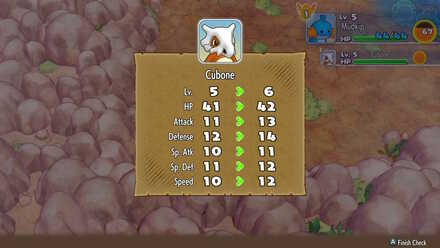 Each Pokemon has a set of six base stats that determine how they act in a mystery dungeon. These are HP, Attack, Defense, Sp. Atk, Sp. Def, and Speed.

HP determines how many hits a Pokemon can take before fainting.

Speed covers how accurate and evasive a Pokemon is. The higher its Speed stat is, the more likely a Pokemon is to land hits and avoid moves from enemy Pokemon.

Aside from these six base stats, there are also two more unique stats that affect how a Pokemon acts in Pokemon Mystery Dungeon. 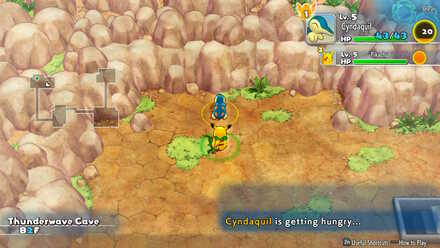 Belly is a stat unique to the team leader of a rescue team. For every action a leader takes in a mystery dungeon, their Belly stat decreases by a certain amount.

A lower belly stat doesn't affect a Pokemon's other stats, but be careful, as the leader will start losing HP once their Belly stat drops to 0.

Travel Speed is a stat that's separate from a Pokemon's Speed base stat. Instead of covering how accurate or evasive a Pokemon is, travel speed governs how many actions a Pokemon can take in a turn. 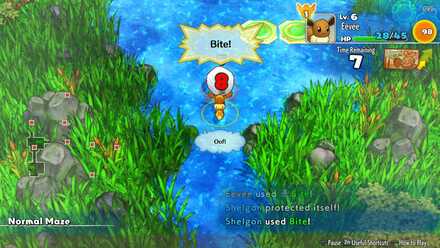 A couple of important factors take part in the damage calculation process: the move's power, the attacker's level, the attacker's Attack/Sp. Atk stat, the defender's Def/Sp. Def stat, and the various modifiers that stack onto the move's damage.

All these stats are figured into an equation that results in the final damage output we see in the game. While the exact equation is a bit of a mystery, we know a little bit about some of the modifiers that go into it.

Type effectiveness is a Rock-Paper-Scissors-like system that multiplies or divides damage based on the attacking move's type and the defending Pokemon's type. Pokemon even get a Same-Type Attack Bonus (or STAB) when they use moves of the same type that they are!

If you want to learn more about the details of this system, you can check out our article on Type Effectiveness.

Critical hits are occurences where a move does 1.5x more damage than normal. In most cases, critical hits rarely happen, and only occur during a lucky break. However, some moves and abilities ensure critical hits.

See more comments (3 Comments)
Opinions about an article or post go here.
Opinions about an article or post
We at Game8 thank you for your support.
In order for us to make the best articles possible, share your corrections, opinions, and thoughts about "Stats and Damage Calculation" with us!
When reporting a problem, please be as specific as possible in providing details such as what conditions the problem occurred under and what kind of effects it had.