This is a page about the Dungeon Stormy Sea in the game Pokemon Mystery Dungeon: Rescue Team DX for the Nintendo Switch. Read on for information about its boss, the number of floors and which Pokemon can be found here. 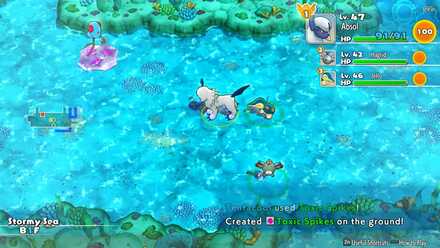 Stormy Sea can be a tough dungeon to traverse, especially with the number of Pokemon that use long-range attacking moves. Room-affecting orbs like the Slumber Orb and the Petrify Orb can be a good counter against those Pokemon, allowing you to get a hit or two on them before they can attack.

An Escape Orb can also come in handy in Stormy Sea as you may want to leave the dungeon early in order to recruit some of the Pokemon that join you.

On that note, while Grass-type is also super-effective against Water-types, we don't suggest bringing Grass-type Pokemon as Water/Ice- and Water/Poison-type Pokemon like Seel and Tentacruel roam these dungeons as well.

First of all, all your non-Water-type Pokemon are going to have the Slow condition, which causes them to take 2 turns to move, so bring along Pokemon that can attack from afar.

Second, make sure to not bring any Fire-type Pokemon with you. When you cause enough damage to Kyogre, he will transform into Primal Kyogre and activate its Primordial Sea ability, which causes the Heavy Rain weather and nullifies all Fire-type attacks.

Other than those two points, it's a standard boss battle, so just keep hitting Kyogre with long-range Electric-type moves and you should eventually be able to defeat it.

When you defeat Kyogre, you'll be able to recruit it and receive the camp that it'll stay in.

These two Pokemon have the aforementioned long-ranged attacks that can hit your team from afar, so you should watch out for them. Remoraid roams the earlier parts of the dungeon while Omastar roams the latter parts.

Post (0 Comments)
Opinions about an article or post go here.
Opinions about an article or post
We at Game8 thank you for your support.
In order for us to make the best articles possible, share your corrections, opinions, and thoughts about "Stormy Sea Dungeon Strategy Guide and Encountered Pokemon" with us!
When reporting a problem, please be as specific as possible in providing details such as what conditions the problem occurred under and what kind of effects it had.