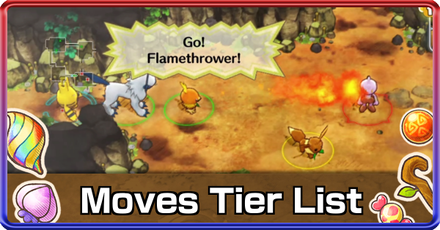 This is a guide to the best and strongest Moves in the game Pokemon Mystery Dungeon: Rescue Team DX for the Nintendo Switch. Read on to find what the best Moves are for completing the Story and which Pokemon can learn these Moves.

As with the original game, multi-hit attacks dish out heavy damage, with each hit dealing damage equivalent to a standard attack in itself. Although their accuracy is a bit low compared to other attacks, this can be covered by raising the Pokemon's Speed and the Move's Level, and even when some strikes multi-hit Moves miss, at least some of the hits will almost definitely land, ensuring at least some damage will be inflicted. These attacks are extremely using for dealing with individual opponents at a time.

These attacks have a Range of an entire Room, and can hit all foes anywhere in a single Room. In special areas called Monster Houses which are packed with enemy Pokemon, these moves can be a lifesaver. These attacks are ideal for handling situations with multiple foes at a time.

Long-Range Attacks are able to hit foes before they get close. They are especially useful in hallways, where Pokemon in the back normally are too far away to attack. They won't be affected or blocked by the position of your teammates, and can move from the back of the line to hit distant enemies and support the teammates risking their skins in the front.

Moves which inflict negative Status Conditions and lower the stats of foes can be highly effective. In particular, the Paralysis status, which prevent the opponent from moving while simultaneously lowering their Travel Speed, is effective in Boss fights, and both attacks and Status Moves which inflict this status are recommended.

See more comments (7 Comments)
Opinions about an article or post go here.
Opinions about an article or post
We at Game8 thank you for your support.
In order for us to make the best articles possible, share your corrections, opinions, and thoughts about "Best Moves Tier List" with us!
When reporting a problem, please be as specific as possible in providing details such as what conditions the problem occurred under and what kind of effects it had.