This is a page about the Dungeon Sinister Woods in the game Pokemon Mystery Dungeon: Rescue Team DX for the Nintendo Switch. Read on for information about its boss, the number of floors and which Pokemon can be found here. 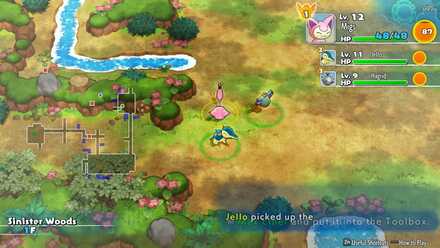 On your first time through Sinister Woods, Team Meanies will be waiting for you at the center. After you've defeated them once, they won't return to this Dungeon any more.

This is the first Boss you'll face with three foes at once, so Orbs are recommended for their potential to inflict Status on multiple foes at once. The All Power Up Orb is also recommended for its effect of increasing your whole team's Attack and Special Attack – this can help your individual members each handle themselves more easily against multiple attackers.

The Pokemon listed above are all obtainable before entering Sinister Woods. As this Dungeon mostly includes Bug and Grass-type Pokemon, it's a good idea to bring Pokemon who can deal super effective damage. Note that the starter Pokemon listed are only available at the beginning of the game.

Team Meanies will only appear as part of the Main Story. After you've completed Sinister Woods once and return to it as an optional Dungeon, they will not appear here again.

In Pokemon Mystery Dungeon DX, although you are only allowed to bring 3 Pokemon into a Dungeon, you are able to recruit Pokemon within a Dungeon to a max team size of 8. It's possible to arrange recruited Pokemon into a wall, protecting your starter and partner behind them while allowing your teammates to deal damage automatically to Team Meanies.

When you find a stranded Pokemon in the Dungeon, giving them an Apple will cause them to definitely join your team, so bring plenty of Apples with you into the Dungeon to ensure that you can recruit as many friends as possible. In particular, Linoone's Fury Swipes can wreak havoc on Team Meanies, and its Pickup Ability makes it a consistently useful member of your team.

When your team is underleveled, these three Pokemon can deal heavy damage to your team and potentially faint one of your Pokemon in a single turn. Linoone's Fury Swipes is a multi-hit force to be reckoned with, and can potentially deal over 50 damage at once, so keep your distance and don't be caught off guard.

In order for us to make the best articles possible, share your corrections, opinions, and thoughts about 「Sinister Woods Dungeon Strategy Guide and Encountered Pokemon | Pokemon Mystery Dungeon DX Switch」 with us!