This is a page about the Dungeon Magma Cavern in the game Pokemon Mystery Dungeon: Rescue Team DX for the Nintendo Switch. Read on for information about its boss, the number of floors and which Pokemon can be found here. 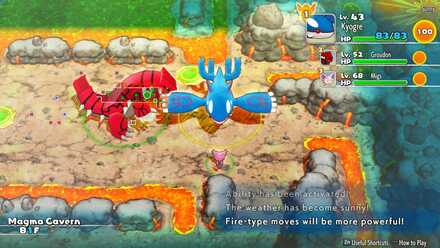 As the game's penultimate dungeon, you'll need to come prepared as the dungeon can be just as dangerous as Groudon himself. For one, monster houses are likely to appear in Magma Cavern, so having items that affect entire rooms can make life a little easier.

These items could be ones that cause status conditions like a Slumber Orb, a Petrify Orb, or a Totter Orb. While you should be able to find these orbs in Magma Cavern, it's best to have them already with you going in.

On another note, you should watch out for the Golems and Gravelers in the dungeon, as their attacks affect the entire room, so try to take care of them first whenever you spot them.

Magma Cavern is filled with Fire- and Ground-type Pokemon, so having a strong Water-type Pokemon will do you good. That said, if you don't have a good Water-type, you can bring Absol with you instead.

He may not have moves that are super-effective against the denizens of the dungeon and even Groudon, but Absol is powerful enough on his own to deal with them anyway.

How to Beat Groudon

This boss fight can be a bit tricky at first, since you'll have to deal with changing terrain for the first time in the game.

During the fight, some of the tiles are going to light up and erupt into lava. While you can still walk on these if you have to, these tiles will give your Pokemon the Burn status condition, so be careful!

The lava will continue to spread as you fight Groudon, so you'll have to adjust your tactics as the fight goes on. But, as long as you keep on hitting Groudon with super-effective Water-type moves, you should be able to beat him.

Post (0 Comments)
Opinions about an article or post go here.
Opinions about an article or post
We at Game8 thank you for your support.
In order for us to make the best articles possible, share your corrections, opinions, and thoughts about "Magma Cavern Dungeon Strategy Guide and Encountered Pokemon" with us!
When reporting a problem, please be as specific as possible in providing details such as what conditions the problem occurred under and what kind of effects it had.