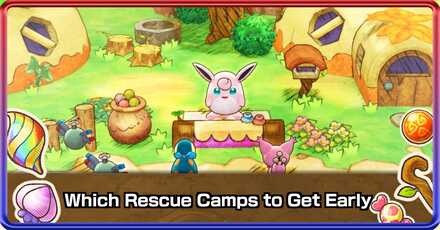 Some Rescue Camps benefit you greatly if you get them at an early point in the game. This page lists these Rescue Camps and provides arguments to why. Click here to learn more about the Rescue Camps in the game Pokemon Mystery Dungeon: Rescue Team DX on the Nintendo Switch.

Geodude is very powerful in the early stages of the game because of Rock Polish. Unlock Mt. Green to have a chance of recruiting him Mt. Steel!

It has access to powerful Electric moves and Fire Moves such as Overheat! If you want to consider hunting for one in Mt. Thunder, purchase Thunder Crag immediately!

Its large size allows it to hit multiple targets with moves that normally only damage one tile! If you are lucky enough to befriend one early on in Oddity Cave, make sure you have Boulder Cave established!

Befriending a Scyther early on in Sinister Woods would later on prove useful in the post-game. Scizor is one of the best Pokemon to run level rest dungeons because of its typing and starting movepool.

Found in Great Canyon, Houndoom is a fierce Fire Pokemon that can Mega Evolve later on. If you managed to to get one with Flash Fire, consider yourself lucky! Unlock Ravaged Field to utilize this powerful Fire powerhouse.

The Slugma line can be recruited in Mt. Blaze or Magma Cavern. Magcargo is one of the most powerful Pokemon in the game because it has access to Shell Smash and Earth Power. Establish a camp in Crater to recruit the mighty Magcargo!

Flygon can possess a similar moveset with Magcargo at it also has access to Earth Power but instead of Shell Smash, it uses Dragon Dance. If you manage to recruit it in Sky Tower, it can prove very useful in the second fight versus Groudon.

A Cloyster with Skill Link can COMPLETE the whole game single-handedly. It can both clear normal dungeons and level reset dungeons with ease! Unlock Bountiful Sea to recruit a Shellder in Stormy Sea to ensign the MOST POWERFUL POKEMON IN THE GAME.

See more comments (14 Comments)
Opinions about an article or post go here.
Opinions about an article or post
We at Game8 thank you for your support.
In order for us to make the best articles possible, share your corrections, opinions, and thoughts about " Which Rescue Camps to Get Early" with us!
When reporting a problem, please be as specific as possible in providing details such as what conditions the problem occurred under and what kind of effects it had.