All Damage Types and Effects | Valheim 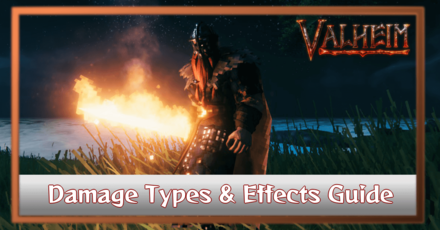 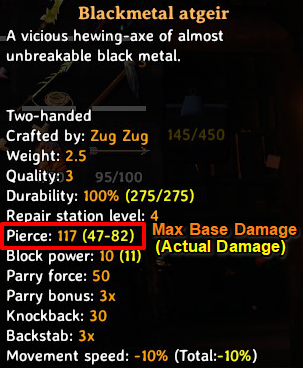 Orange damage values indicate a weapon's maximum base damage. This can be achieved by raising the weapon's corresponding skill to 100.

Yellow damage values (Parenthesized) indicate a weapon's current damage range based on your skill rating. This gradually improves as you increase the corresponding skill for a weapon.

Furthermore, these base damages can be amplified by other damage bonuses such as Parrying and Backstabs

Monsters in Valheim have their own resistances and vulnerabilities to certain damage types.

Neutral damage values are displayed as White. This means that the monster you struck is neither resistant or weak to the damage type you dealt.

Resistant damage values are displayed as Gray. As the term suggest, this indicates that the damage type dealt is ineffective against the monster.

Effective damage values are displayed as Yellow, and indicates that the monster that you attacked is especially weak against that damage type.

Parrying doubles your next attack after blocking an enemy's attack just before it connects. Take note that a shield is not required to perform a parry in Valheim.

Read more about Valheim's Parrying Mechanic by checking our guide below:
How to Parry: Parry Force and Parry Bonus Explained

Backstab Bonus is applied whenever you attack an unsuspecting enemy from stealth. The damage is determined by your weapon's skill-based damage rating (Yellow Parenthesized value) multiplied by its Backstab Bonus.

It is important to note that Knives have the highest backstab bonuses in the game.

Slash damage is mostly present in Axes, Swords, and Knives.

Pierce damage is typically found in all types of Arrows, Spears, and Atgeirs.

Frost is an elemental damage type in Valheim that applies the Freezing Debuff on enemies on impact. This debuff slows enemies' movements and stamina regeneration for the entire duration.

Spirit damage is a special elemental damage type in Valheim that only applies to Undead type monsters such as Wraiths, Skeletons, and Draugrs

Poison is an elemental damage type in Valheim that is mostly effective against Living monsters or creatures.

Fire is the most accessible elemental damage in Valheim because it is present in tools and weapons such as Torches and Fire Arrows.

In order for us to make the best articles possible, share your corrections, opinions, and thoughts about 「All Damage Types and Effects | Valheim」 with us!