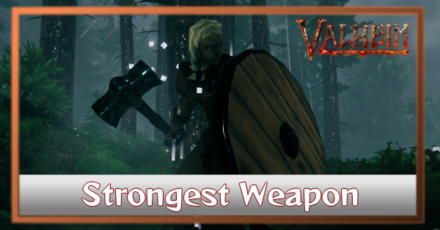 This is a list of the strongest and best weapons in the game Valheim. Learn what Weapons are the overall best in the game, and how to get each of them.

The Silver Sword's combined damage from Slash and Spirit grant it a total attacking power of 105, tying with the Piercing damage of the Blackmetal Atgeir.

Although the case for the Blackmetal Atgeir being the strongest weapon could also be argued, the Silver Sword is easier to craft, requiring only a Forge Level 3 instead of Level 4. It also deals Spirit damage, allowing it to deal increased damage to undead enemies. Once you make it all the way to Yagluth, be sure to bring your Silver Sword along!

How to Craft the Silver Sword

Although Frostner has a lower overall damage output than the Silver Sword, it has a few points which make it stand out.

Its Knockback is the best of any weapon in the game, triple that of the Silver Sword. This is essential for gaining much-needed breathing room in a battle. Just be aware that larger enemies like Trolls still won't be shaken by it, so don't rush in overconfidently.

Additional, the Frostner deals Frost damage, which creates a cloud of sparkly mist around an enemy struck by it. This will temporarily stifle an enemy's movements, preventing them from making a quick retaliation. This combines well with the Knockback aspect of the weapon for duels against enemies of a similar size to the player.

How to Craft the Frostner

Despite the efforts of all those who work tirelessly to farm Materials and craft the best Weapons in the game, the only way to achieve the true strongest weapon in the game is by cheating. The description of the weapon, ”Cheater!“, calls the user out directly.

The Cheat Sword, with a Slash of 10000, is strong enough to destroy any enemy in the game in a single blow. In essence, it removes all challenge from any battle the player will encounter.

The Cheat Sword is a weapon players can use to test the limits of the game, but is not recommended for any standard playthrough. Try to resist the temptation to pull it out in a tight spot, and continue the journey by your own powers. That said, for those who love cheating, have at it!

How to Get the Cheat Sword

The Cheat Sword has not been confirmed through normal gameplay. It's possible that the Cheat Sword will be added in a future update or DLC.

Currently, the only way to obtain the item is to turn on cheat codes by typing devcommands in the F5 console, and use the spawn SwordCheat command to create the item. To learn more about how to use the console, check our article on how to open the console.

All Cheats and Spawnable Items

Register as a member and get all the information you want. (It's free!)
Login
Opinions about an article or post go here.
Opinions about an article or post
We at Game8 thank you for your support.
In order for us to make the best articles possible, share your corrections, opinions, and thoughts about "Best Weapons | Strongest Weapons in the Game" with us!
When reporting a problem, please be as specific as possible in providing details such as what conditions the problem occurred under and what kind of effects it had.