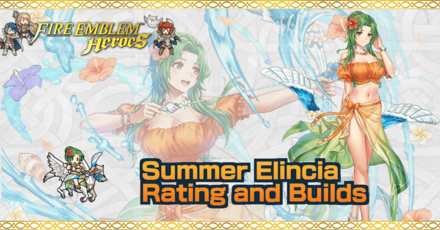 This is a ranking page for the hero Elincia - Seaside Queen from the game Fire Emblem Heroes (FEH). Read on to learn the best IVs (Individual Values), best builds (Inherit Skill), weapon refinement, stats at Lv 40, and more for Summer Elincia. 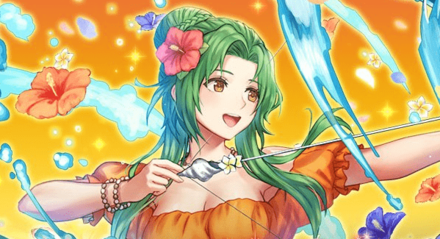 As a hero obtainable only through Tempest Trials, Summer Elincia will always have neutral IVs by default. The only way to access IVs for this unit is through using Trait Fruits.

The best IVs for Summer Elincia are +Spd and -Def. Her Spd is a superboon and boosting it improves the performance of Whitecap Bow+.

Her defensive stats can all be good banes; we chose Def because it isn't a superbane and her Res is serviceable.

We recommend +Spd when merging Summer Elincia to +10. Her Spd is her best stat and should be boosted as much as possible.

Summer Elincia's base kit is good enough to use in non-PvP game modes. Her C slot is flexible depending on team needs; we chose Guidance to reliably activate her Bond skills.

Summer Elincia is a ranged physical attacker (range = 2). Therefore, when not accounting for the Weapon Triangle, the amount of damage she deals will be equivalent to her Atk minus the foe's Def stat.

Whitecap Bow+ is a good inheritable weapon that can attack twice

Summer Elincia may not have come with an exclusive weapon like her other 2022 Summer counterparts, but her Whitecap Bow+ is still a good weapon on its own.

It grants Atk/Spd+5 duting combat, and can allow Summer Elincia to attack twice if she outspeeds her foe by 10 or more Spd points.

While the brave effect is conditional on a Spd check, it comes with an Atk/Spd bonus to help her meet that threshold. Additionally, unlike other ranged brave weapons, Whitecap Bow+ has 12 might, giving it that extra firepower necessary to achieve KOs.

As a flying unit, Summer Elincia takes 1.5x damage from bows and weapons effective on flying units. Be sure to keep them out of the range of archers and leave them to other units.

We Recommend You Unlock Potential for Elincia - Seaside Queen!

Summer Elincia as a Source Hero

Summer Elincia only has Whitecap Bow+ as a valuable inheritance option.

Her bow is good on speedy units, making it a worthwhile addition.

How would you rate Summer Elincia?

Top tier hero. Must promote and merge. 30
Votes
Promote if you need his/her archetype. 2
Votes
Promote to 5 stars if you like this hero. 22
Votes
Recruit for his/her Skill Inheritance options. 3
Votes
Pass on this hero. 1
Votes

How to Get Summer Elincia / Illustrations / Voice Actor / Quotes

How to Get Summer Elincia

Summer Elincia is a limited time Hero who can be obtained as a reward for your score in the Tempest Trials. They do not appear in regular summons. After the event has ended, they can be obtained by using Heroic Grails.

In order for us to make the best articles possible, share your corrections, opinions, and thoughts about 「Summer Elincia Builds and Best IVs | Fire Emblem Heroes (FEH)」 with us!