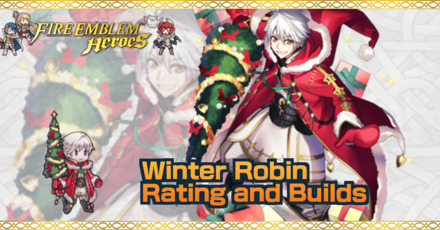 This is a ranking page for the hero Robin - Festive Tactician from the game Fire Emblem Heroes (FEH). Read on to learn the best IVs (Individual Values), best builds (Inherit Skill), weapon refinement, stats at Lv 40, and more for Winter Robin.

The best IVs for Winter Robin are +Spd and -HP. A higher Spd stat allows Robin to get a ton of follow-up attacks on his foes. Although his HP is a superbane, it is not much of importance to him and can be easily supplemented by other defensive skills, buffs and even seals, so he can safely take it as a flaw.

This build uses the recoil from Atk/Spd Push 4 to activate Desperation and allow consecutive attacks for future engagements. Make sure to keep the unit alive after the first combat since they will be in exploitable HP ranges! You can also use Reciprocal Aid to activate it. Brazen Atk/Def 3 will be easily activated by these mechanics too!

This is an enemy phase build for Winter Robin. Distant Counter and Vengeful Fighter 3 allows him to bait opponents into attacking him in the enemy phase. You can pick up Atk/Def Menace in th C skill if your other units can solve his mobility problems.

Winter Robin (M) is a close physical attacker (range = 1). Therefore, when not accounting for the Weapon Triangle, the amount of damage he deals will be equivalent to his Atk minus the foe's Def stat.

Brazen Atk/Spd 3 grants Winter Robin (M) with +7 Atk/Spd during combat if his HP ≤ 80%. It might be a little tricky to activate, but Reciprocal Aid helps greatly, as it allows Robin to swap HP values with an adjacent ally. If done correctly, you can constantly enjoy +7 Atk/Spd on a very powerful offensive armored unit.

Once you have met the trigger condition, utilize Winter Robin's attacks using skills like Sing and Dance so that he can attack multiple times. Using this method, his high firepower allows him to take out many enemy units in just one turn, especially if they are all adjacent to each other.

If Winter Robin is adjacent to other armored units, Robin and said units can move 1 extra space for that turn. It is pretty easy to trigger, and it greatly improves the mobility of all armored allies.

Unlike other armored-lance units, Winter Robin has a fairly high Spd stat of 34 at Lv. 40. Because of this, he can perform a lot of follow-up attacks without relying on other skils that guarantee it. This means that Winter Robin can maintain other skills that help him and his team instead.

Because he is an armored unit, he can only normally move 1 space at a time. However, Winter Robin (M) has access Armor March so make sure to include atleast 1 other armored unit in your team improve his mobility. This skill goes to waste easily, so for the most part, it belongs on all-armor teams.

Winter Robin (M) is an armored unit making him weak to skills against such units such as Armorslayer+. If attacked by a unit with Armorslayer+, Robin will take 1.5x damage. Be mindful of what skills your enemies are equipped with.

Robin - Festive Tactician Only Appears as a 5 Star Hero!

Winter Robin as a Source Hero

Robin can be used to inherit the skills Brazen Atk/Spd 3 and Tannenboom!+. However, Winter Robin (M) is a rare special hero that can only be pulled from specific gachas. Please think carefully before fodderring him off.

How to Get Winter Robin / Illustrations / Voice Actor / Quotes

How to Get Winter Robin

Winter Robin is a limited time Hero who can be pulled from a Special Heroes Summoning Event. They do not appear in regular summons.

Register as a member and get all the information you want. (It's free!)
Login
Opinions about an article or post go here.
Opinions about an article or post
We at Game8 thank you for your support.
In order for us to make the best articles possible, share your corrections, opinions, and thoughts about "Winter Robin Builds and Best IVs" with us!
When reporting a problem, please be as specific as possible in providing details such as what conditions the problem occurred under and what kind of effects it had.