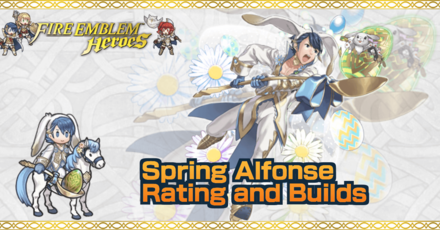 This is a ranking page for the hero Alfonse - Spring Prince from the game Fire Emblem Heroes (FEH). Read on to learn the best IVs (Individual Values), best builds (Inherit Skill), weapon refinement, stats at Lv 40, and more for Spring Alfonse.

Alfonse's best IVs are +Spd and -Res. A higher Spd stat will make it even easier for Alfonse to get follow-up attacks on foes, making him more viable. Additionally, his base Res stat is already rather low, so it is an ideal dump stat.

This build revolves around Brave Axe and Desperation. By equipping the Brash Assault Seal, Alfonse will be able to attack 4 times in a row when the enemy can counterattack, making him incredibly strong.

This is a build that tries to make as little use of Inherit Skill as possible. Equipping his B slot with the skill Lancebreaker will allow him to double even high Spd lance users and activate his special through a follow-up attack. Spring Alfonse has a base Spd of 33, so this build will make it difficult for foes to double attack him, even if they have skills with guaranteed follow-up attacks.

We Recommend the Spd Upgrade!

There is no special effect Weapon Refinement for Giant Spoon+, so if you do want to upgrade it, we recommend the +Spd refinement. A +Spd IV combined with this weapon refinement will give Alfonse a whopping 39 Spd, which will allow him to double many foes, on top of reducing the amount of follow-up attacks he takes from enemies. However, you may also prefer to give him a different weapon skill, such as Brave Axe+.

Spring Alfonse is a close ranged physical attack phase unit. Therefore, when not accounting for the Weapon Triangle, the amount of damage he deals will be equivalent to his Atk minus the foe's Def. Additionally, he is a hero who should ideally be equipped with buffs to himself and allies and debuffs to the foes.

Def Smoke Casts a Powerful Debuff Over a Wide Area

Alfonse learns the skill Def Smoke 3, which casts a significant Def penalty to enemies in a wide area after combat. This is very effective when up against foes like Surtr or Idunn who have a huge Def stat.

Aas a cavalry unit, Alfonse takes a large amount of damage from cavalry-effective weapons such as Ridersbane. Be cautious of the weapons your foes possess.

Should you Unlock Potential for Spring Alfonse?

Alfonse - Spring Prince Only Appears as a 5 Star Hero!

Spring Alfonse as a Source Hero

You may wish to use Spring Alfonse to inherit Swordbreaker 3. However, as he is a special hero who does not appear in regular summons, think hard before using him as a source for Inherit Skill.
・Source Heroes for Skills
・Source Heroes Tier List

How to Get Spring Alfonse / Illustrations / Voice Actor / Quotes

How to Get Spring Alfonse

Spring Alfonse is a limited time Hero who can be pulled from a Special Heroes Summoning Event. They do not appear in regular summons.

Register as a member and get all the information you want. (It's free!)
Login
Opinions about an article or post go here.
Opinions about an article or post
We at Game8 thank you for your support.
In order for us to make the best articles possible, share your corrections, opinions, and thoughts about "Spring Alfonse Builds and Best IVs" with us!
When reporting a problem, please be as specific as possible in providing details such as what conditions the problem occurred under and what kind of effects it had.