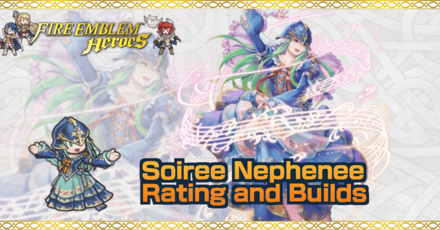 This is a ranking page for the hero Nephenee - Sincere Dancer from the game Fire Emblem Heroes (FEH). Read on to learn the best IVs (Individual Values), best builds (Inherit Skill), weapon refinement, stats at Lv 40, and more for Soiree Nephenee. 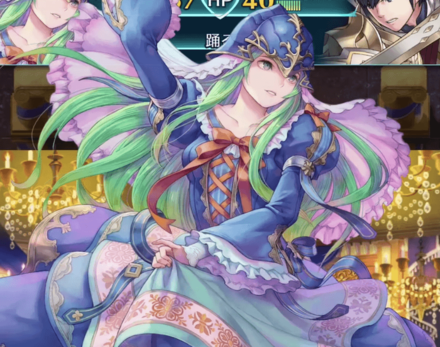 The best IVs for Soriee Nephenee are +Spd and -HP. A higher Spd stat allows Nephenee to deal with less follow-up attacks from foes, increasing her survivability. It also allows her to score more follow-up attacks. Her HP is of less importance so it can be safely taken as a bane.

Soiree Nephenee is a ranged physical attacker (range = 2). Therefore, when not accounting for the Weapon Triangle, the amount of damage she deals will be equivalent to her Atk minus the foe's Def stat.

Dance is an assist skill that allows the target ally to take another action. Because of this, your allies can move and attack twice to take down foes, or attack and move back to the safe zone so that they won't be taken out during the enemy phase. It has high strategic value and it allows Soiree Nephenee to become a part of many team compositions.

Lots of buffs for allies

Soiree provides lots of buffs to an ally:

Those are a lot of stats that are quite easy to put onto another ally! Take advantage of these buffs as much as possible as Soiree Nephenee's base kit is solely for refreshing and applying buffs. She does not provide much other than that.

As mentioned above, none of the skills in her base kit helps her in combat. Strategically treat Soiree Nephenee as a refresher-assist buff support and do not rely on her doing the dirty work unless you build her into a combat unit. Click here for a closer look on her skillset!

Should you Unlock Potential for Soiree Nephenee?

Nephenee - Sincere Dancer Only Appears as a 5 Star Hero!

Soiree Nephenee as a Source Hero

Soiree Nephenee can be used to inherit the skill Spd Tactic 3. Take note that Soiree Nephenee is a special hero that you can only get from specific banners. Think carefully before foderring her off.

How to Get Soiree Nephenee / Illustrations / Voice Actor / Quotes

How to Get Soiree Nephenee

Soiree Nephenee is a limited time Hero who can be pulled from a Special Heroes Summoning Event. They do not appear in regular summons.

Register as a member and get all the information you want. (It's free!)
Login
Opinions about an article or post go here.
Opinions about an article or post
We at Game8 thank you for your support.
In order for us to make the best articles possible, share your corrections, opinions, and thoughts about "Soiree Nephenee Builds and Best IVs" with us!
When reporting a problem, please be as specific as possible in providing details such as what conditions the problem occurred under and what kind of effects it had.