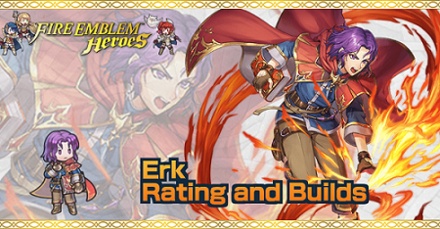 This is a ranking page for the hero Erk - Studious Mage from the game Fire Emblem Heroes (FEH). Read on to learn the best IVs (Individual Values), best builds (Inherit Skill), weapon refinement, stats at Lv 40, and more for Erk.

The best IVs for Erk are +Spd and -Res. A higher Spd stat allows Erk to get a ton of follow-up attacks on his foes. Additionally, his Spd is a superboon so you should take advantage of that as much as possible. Taking a bane in Res balances his defensive stats, that is ideal for survival so you should aim for that as much as possible! It might be tempting to maximize his Res stat by taking a Def bane, but it is already low and it is a superbane so taking it will be very bad for his survival!

We recommend a +Spd IV when merging Erk to 10. This is for the same reasons as above. You can also take a +Atk IV if you plan on using support and buffs to supplement his Spd.

A budget build for Erk. This showcases him as a mage that can be used to take out the popular axe units in the game such as Legendary or Brave Edelgard. You can swap out his A skill with either Swift Sparrow 2 (or 3), or Atk/Spd Solo 3.

This is a premium build for Erk that makes him very deadly in both phases of battle.

Erk's weapon cannot currently be refined. This section will be updated if it becomes refineable in the future!

Erk is a ranged magic attacker (range = 2). Therefore, when not accounting for the Weapon Triangle, the amount of damage he deals will be equivalent to his Atk minus the foe's Res stat.

Spd/Res Solo 3 and Rauðrfox+ combines for a great stat gap betweene Erk and his foe.

Rauðrfox+ inflicts an in-combat -4 Atk/Spd/Def/Res to Hubert's foe when he initiates combat. This makes Hubert a great player phase attacker as this can be treated as a Swift Sparrow-like skill. Additionally, it is an in-combat buff which makes it easy to stack with other buffs.

If Erk enters combat without an adjacent ally, he gets a +6 Spd/Res boost through his A skill. This is pretty easy to trigger and stacks with Rauðrfox+.

Spd Opening 3 grants a buff to the speediest ally

+6 Spd is granted for 1 turn to Erk's fastest ally at the start of each player phase. This is very helpful and it is enough of a buff to allow an ally to score a follow-up attack if they are tied with someone. This buff will be granted regardless of Erk's positioning in relation to that ally.

Lack of a Prf Weapon Makes Him a Mediocre Unit

Since Erk does not have a Prf weapon, he will have a hard time scoring high in the Arena and is easily powercrept by other mages.

If you do like Erk, however, you can perhaps give him another weapon such as Rauðrblade+ or Unity Blooms+.

Erk has low Def and Res, which makes him vulnerable against any unit that attacks him.

Make sure you watch out where he is positioned after he's done attacking, or use a dancer to make him retreat to safety!

Should you Unlock Potential for Erk?

Erk as a Source Hero

All of Erk's skills carry inheritance value as everything can be inherited from him. Just make sure to consider all your resources as all except Moonbow are quite rare. You can also get Moonbow from him if you desperately need him. Since he is a demote unit, he is not that powerful compared to his batchmates and it is not an uncommon sight to get multiple copies of him.

How to Get Erk / Illustrations / Voice Actor / Quotes

How to Get Erk

Erk is a Hero who can be pulled from any summon.

Register as a member and get all the information you want. (It's free!)
Login
Opinions about an article or post go here.
Opinions about an article or post
We at Game8 thank you for your support.
In order for us to make the best articles possible, share your corrections, opinions, and thoughts about "Erk Builds and Best IVs" with us!
When reporting a problem, please be as specific as possible in providing details such as what conditions the problem occurred under and what kind of effects it had.