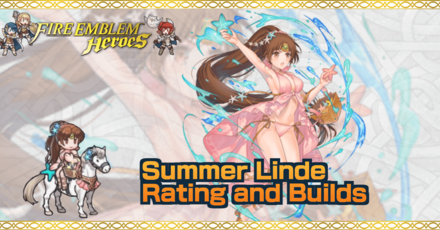 This is a ranking page for the hero Linde - Summer Rays from the game Fire Emblem Heroes (FEH). Read on to learn the best IVs (Individual Values), best builds (Inherit Skill), weapon refinement, stats at Lv 40, and more for Summer Linde.

The best IVs for Summer Linde are +Spd and -Res. A higher Spd stat helps Summer Linde in scoring follow-up attacks and in avoiding said attacks from enemy units. With her low defensive stats, no bane would be best, but a -Res IV will make her Def and Res a bit more balanced.

Summer Linde is a ranged magic attacker (range = 2). Therefore, when not accounting for the Weapon Triangle, the amount of damage she deals will be equivalent to her Atk minus the foe's Res stat.

Built in Desperation effect in her weapon

Summer Linde's weapon, Starfish+, has the effect of Desperation 3 built-in. It allows Linde to do a follow-up attack before the enemy counterattacks if her HP has dropped below 75% HP. If Linde's damage is high enough, this allows her to easily take out enemies without taking damage.

Additionally, it inflicts -7 Def/Res to foes after combat as it is a dagger weapon.

Gets a huge bonus to Atk and Res

Summer Linde's A skill Brazen Atk/Res 3 will give her Atk/Res+7 in combat when her HP gets below 80%. This wil make it easier for her to damage enemies and further increase her high Res stat, allowing her to safely combat magic attackers. This synergizes well with the built-in desperation effect that her weapon possesses allowing her to be a lethal attacker when she is at a specific amount of HP.

Summer Linde's Def and Res sit at only 16 and 26 respectively. This makes her extremely fragile. We recommend making sure that after she applies debuffs, an ally is nearby and ready to finish off the debuffed enemy so that she would not get attacked and taken out.

Because she is a cavalry unit, Summer Linde cannot pass some terrain such as trees. This is disadvantageous in modes such as Arena and Aether Raids as she might be funneled into very compromising positions lead to her getting knocked out. Survey your terrain and plan accordingly!

Summer Linde takes 1.5x damage from cavalry-effective weapons like Ridersbane, and one blow from this type of weapon is sure to take him/her down. Make sure you know what weapons you are up against before hopping too far into the line of battle!
Heroes with Effective Skills

Should you Unlock Potential for Summer Linde?

Linde - Summer Rays Only Appears as a 5 Star Hero!

Summer Linde as a Source Hero

Summer Linde can be used to inherit the skill Cancel Affinity 3. However, since Summer Linde is a special hero that you can only obtain from a special heroes banner, we recommend training and building her instead.

How to Get Summer Linde / Illustrations / Voice Actor / Quotes

How to Get Summer Linde

Summer Linde is a limited time Hero who can be pulled from a Special Heroes Summoning Event. They do not appear in regular summons.

Register as a member and get all the information you want. (It's free!)
Login
Opinions about an article or post go here.
Opinions about an article or post
We at Game8 thank you for your support.
In order for us to make the best articles possible, share your corrections, opinions, and thoughts about "Summer Linde Builds and Best IVs" with us!
When reporting a problem, please be as specific as possible in providing details such as what conditions the problem occurred under and what kind of effects it had.