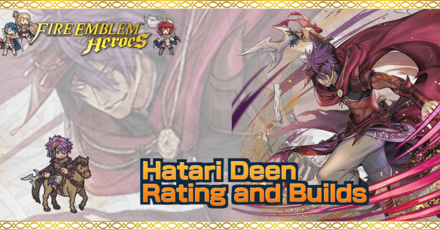 This is a ranking page for the hero Deen - Bladed Sandstorm from the game Fire Emblem Heroes (FEH). Read on to learn the best IVs (Individual Values), best builds (Inherit Skill), weapon refinement, stats at Lv 40, and more for Hatari Deen.

As a hero obtainable only through Tempest Trials, Hatari Deen will always have neutral IVs by default. The only way to access IVs for this unit is through using Trait Fruits.

The best IVs for Hatari Deen are +Spd and -Res. He has a Superboon in Spd and increasing it will further enhance his one-shot potential.

His low Res is of less importance, so it is safe to take it as a bane.

We recommend a +Spd IV when merging Deen to 10. This is for the same reasons as above. With this IV at 10 merges, he reaches a Spd of 43.

This build makes use of Hatari Deen's base kit. Giving him a low cooldown Special, Atk/Spd Solo 3, and Blade Session 3 makes him a useful offensive unit.

Note: Hatari Deen's stats will always have no IVs.

Hatari Deen is a ranged physical attacker (range = 2). Therefore, when not accounting for the Weapon Triangle, the amount of damage he deals will be equivalent to his Atk minus the foe's Def stat. 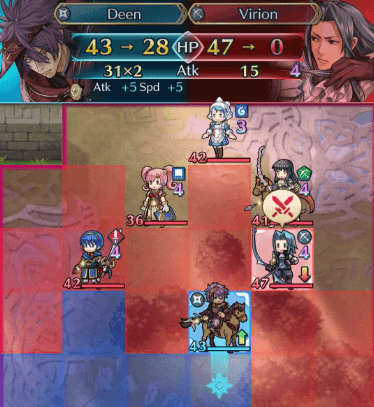 Deen's weapon buffs and the debuffs he inflicts with Spd/Def Snag 3 are shown here.

Deen's Bone Carver+ seems simple, but it has a powerful effect - giving him Atk/Spd+5 and dealing 7 damage to his target and nearby allies after combat.

This makes Deen a powerful offensive unit if built properly as he can either one-shot units on attack and tick tougher enemies' HP down.

Hatari Deen takes 1.5x damage from cavalry-effective weapons like Thani or Binding Reginleif, and one blow from this type of weapon is sure to take him down. Make sure you know what weapons you are up against before hopping too far into the line of battle!

Hatari Deen has mediocre defensive stats, and thus will be vulnerable to any kind of attack.

He's a pure glass cannon unit, so keep him away from enemy units after he's attacked to prevent them from engaging on him!

Hatari Deen as a Source Hero

All of Hatari Deen's skills have inheritance value!

How to Get Hatari Deen / Illustrations / Voice Actor / Quotes

How to Get Hatari Deen

Hatari Deen is a limited time Hero who can be obtained as a reward for your score in the Tempest Trials. They do not appear in regular summons. After the event has ended, they can be obtained by using Heroic Grails.

Post (0 Comments)
Opinions about an article or post go here.
Opinions about an article or post
We at Game8 thank you for your support.
In order for us to make the best articles possible, share your corrections, opinions, and thoughts about "Hatari Deen Builds and Best IVs" with us!
When reporting a problem, please be as specific as possible in providing details such as what conditions the problem occurred under and what kind of effects it had.