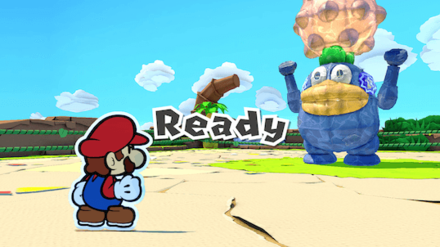 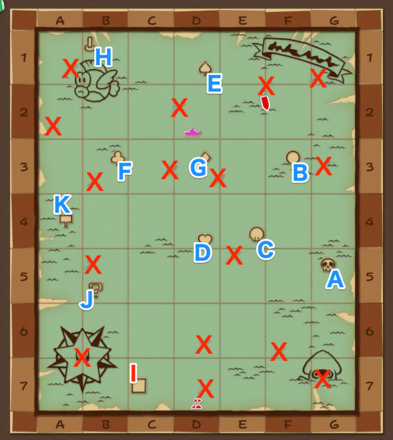 1.) The red X's represent Treasure locations
2.) The Princess Peach's location will change. It is represented by the pink ship.

What is Scuffle Island? 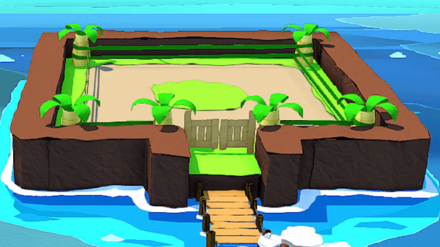 Battle for Lots of Coins

You lose everything if you die

If you're aiming for the big prize, you need to fight 7 consecutive rounds. However, if your HP drops to 0 you will lose all Coins earned up to that point.

You get asked if you want to continue after each round, so if you're low on health it might be better to stop and get the Coins you can. You can also use this method to stop before enemies you struggle with to make your Coin farming faster. To tap out, you have to press B twice when asked!

You will get a huge reward for beating this challenge the first time, but you'll only get 1/10 of the coins from the second time onward. Even if you manage to beat all 7 rounds again, the reward for your second time cleaing is rather subpar...

In order to get to Scuffle Island, you'll first need to unlock the port that goes to the Geat Sea, found in Toad Town. The Toad who will unlock the port for you needs to be saved first. He can be found imitating a fish near Autumn Mountain, so if you haven't unlocked the port yet, you should check around there. 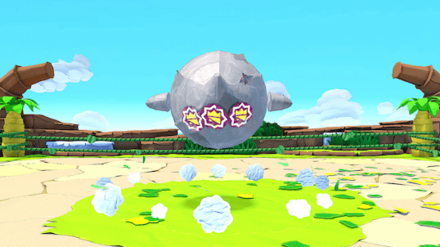 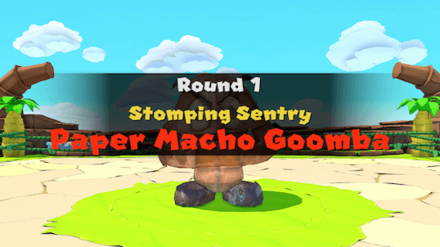 As the Round 1 battle, Paper Macho Goomba is very easy. When it is preparing for an attack, it just dashes forward, so you can easily dodge out of the way. After it charges at you, it will pause for a moment, giving you an opportunity to rush in and whack its backside with your hammer.

The Goomba's movement patterns don't change before or after breaking the seal off. 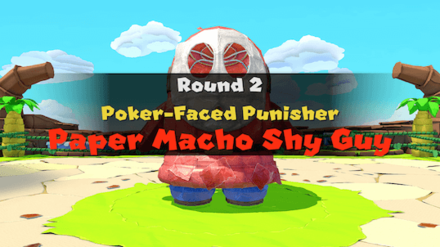 Paper Macho Shy Guy charges in in twos, so it is just slightly different from the Goomba. After you dodge the first attack, it will quickly rush in for another one, so dodge them both, then run in to strike its back.

Shy Guy's movement doesn't change after the seal comes off. 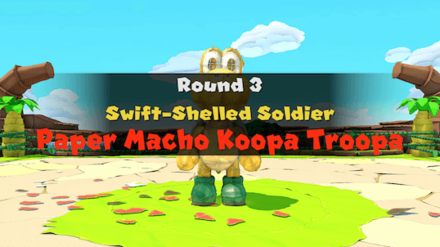 From the Paper Macho Koopa Troopa, the battles will start to get a bit harder. Koopa Troopa will get into its shell and drive into the walls twice before pausing, giving you a moment to rush in and strike. Koopa Troopa in its shell is much faster than the enemies in round 1 and 2, so keep your guard up!

Koopa Troopa also doesn't change its movement after the seal comes off. 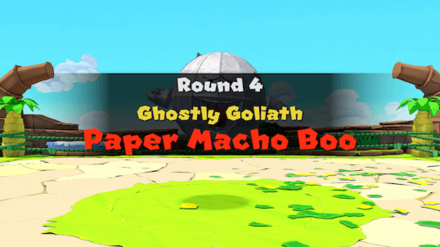 While Round 3 was a bit harder than the previous two, Round 4: Paper Macho Boo is not too bad. Boo becomes shy when faced from the front, making him transparent (and invinsible). Use this to get around to its backside, where you can hit it. The key to this battle is to face Boo until you are almost right next to it, then walk behind it and hit it while it is confused.

Boo's movement doesn't change after the seal comes off. 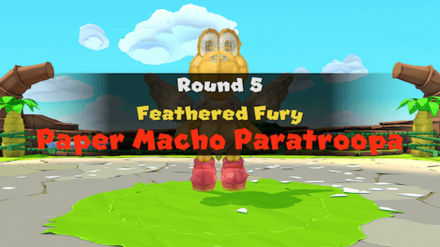 After the little break in Round 4, there is a tough enemy waiting for you in Paper Macho Paratroopa. This enemy's movements will change after its seal is removed.

Before the seal comes off

When Paratroopa spots you, it will charge forward at you in its shell, so you'll have to hit it with your hammer right before it hits Mario, almost like baseball. The timing here is extremely important, so you'll have to be very careful with when you attack.

After the seal comes off

After the seals break, the battle will be just like the Koopa Troopa from Round 2. Dodge its movements and wait for it to hit the wall twice, then move in and strike. 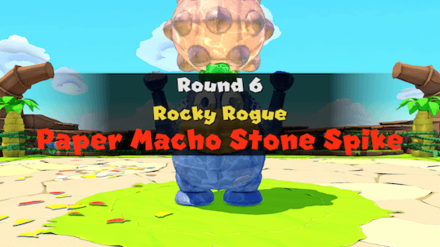 He will sometimes throw very fast stones, or stones in three different directions, so keep an eye on his attacks, and keep your distance when he is attacking. 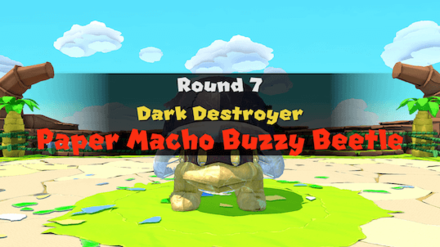 By far the hardest battle, Paper Macho Buzzy Beetle is the last enemy of this challenge. Similar to Koopa, but it is much harder to get a clean hit.

Bounces off walls 6 times before the seal comes off

At first, Buzzy Beetle will hit the wall 6 times before turning over. This will give you a chance to run over and hit its underbelly to remove a seal. The problem lies in the fact that it gets back up very quickly, and that it pretty much flips over immediately after the 6th hit (unlike the koopa, which would fly forward a bit).

You'll really have to pay attention to where it will end up, because if you are too far, it will be very hard to come in for a hit. Start trying to get kind of close to it after the 3rd or 4th hit, so you can be ready for it to flip. When it hits the area near a corner, it will almost always hit the other side right after too. Sometimes it will end up going left and right in the center, making its final position much easier to predict.

Bounces only 3 times after seal comes off

Toward the end of the battle, Buzzy Beetle will become much faster, but it will only hit the wall three times. This is actually advantageous, as there is less randomness in where it will end up.

Hit its belly two more times and finish it off!

There are no Toads to be found here. Check out our full list of Toad locations to find the ones you're missing!

There are no Confetti Holes on Scuffle Island.

There are no collectible Treasures in Scuffle Island.

There are no ? Blocks on Scuffle Island.

>>1 That is correct. Boo becomes considerably faster after its seals are removed.

the macho boo info is incorrect, the boo moves much faster after the seals are removed

Register as a member and get all the information you want. (It's free!)
Login
Opinions about an article or post go here.
Opinions about an article or post
We at Game8 thank you for your support.
In order for us to make the best articles possible, share your corrections, opinions, and thoughts about "Scuffle Island Battle Guide and Rewards" with us!
When reporting a problem, please be as specific as possible in providing details such as what conditions the problem occurred under and what kind of effects it had.