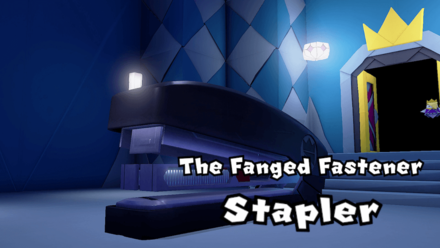 This is a walkthrough for beating Stapler, one of the bosses in Paper Mario: The Origami King for the Nintendo Switch. This guide will cover boss strategy, the best weapons to use, as well as other tips and tricks for beating Stapler. 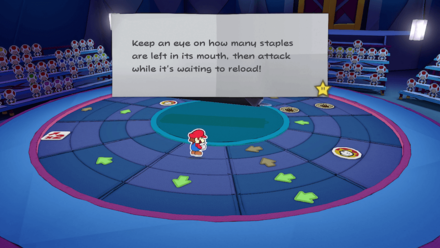 While this is one of the tougher battles overall due to the amount of damage that the Stapler can inflict, the basic strategy is rather simple. Your main goal is to use multi-hits to descrease the amount of staples loaded, making it easier to endure the Bite Barrage attack. Then, when Stapler is reloading, you will have a chance to use the 1000-Fold Arms to inflict a ton of damage on your own. 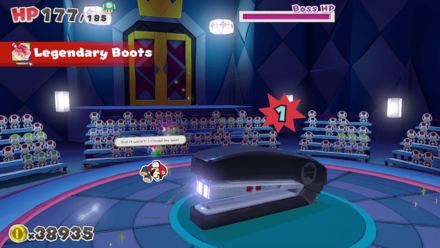 In the next turn, Stapler will begin glowing to let you know it is readying an attack. Try and grab another extra action panel, and once again end on an Action Panel. Jump attack twice to drain another 8 staples. Stapler will then use Bite Barrage, which will deal a considerable amount of damage, but much less than it would have had you not depleted its staples. This goes without saying, but make sure to block the attack.

After this, Stapler will reload using red staples that are more powerful. However, the strategy you use will be more or less exactly the same as the first time. Focus on getting the ON Panel out onto the board, getting the extra action panels, and then using jump attacks to reduce the damge that Stapler can deal in its next attack. It is also a good idea to heal during this time, either by picking up some of the hearts on the board or by paying toads to cheer you. After Bite Barrage, walk over an ON Panel and use the Magic Circle to strike Stapler repeatedly. 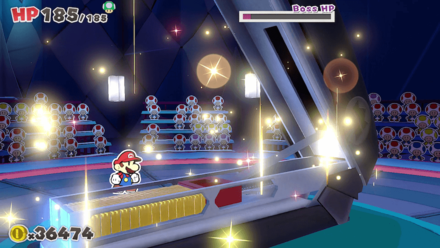 When Stapler reloads again, the staples will be gold, and can deal a ton of damage. Everything in the previous section is true here too. Make absolute sure you have full HP before Stapler uses Bite Barrage, because with the gold staples, this attack will easily do 120+ damage. Afterward, activate a magic circle and then use it to finish off the Stapler with your arms.

The key point of this battle is to lessen the power of Bite Barrage, which is done by depleting Stapler's ammo. Since jump attacks can take away four staples, they can be used together with an extra action panel to make it drop 8 staples total per attack.

If it is possible, using the 1000-Fold Arms right after Stapler reloads can help you deplete a ton of its ammo. However, doing this right before Bite Barrage will make it difficult or impossible to activate and use a Magic Circle while it is reloading, so only do this when Stapler is not glowing.

In addition, the other attacks that the Stapler uses drain its ammo too. If you are up close it will use up two when attacking, but if you attack from one of the back rings, it will fire off more. This can come in handy for reducing the damage from Bite Barrage. 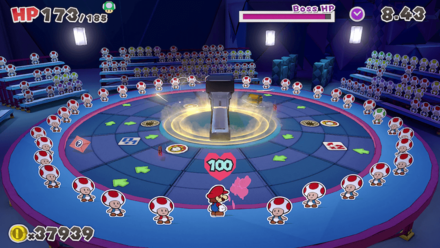 Bite Barrage will do a lot of damage, even if you did manage to deplete some of Stapler's ammo. Therefore, you need to keep your HP up in this battle, especially before Stapler uses Bite Barrage. There are many hearts that you can add to the map by opening up chests. On top of that, you can use some of those coins you've been saving up to pay the Toads to Cheer for you, which can help you recover HP. HP management is one of the most important things in this battle. 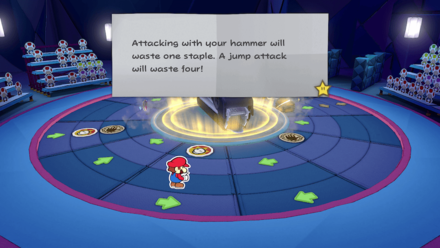 For the most part, you should use Extra Action Panels + Boots to make the stapler drop a lot of its ammo. Even if you use the Legendary Boots, the damage output is minimal, so you may as well use the regular ones. 1000-Fold Arms are also great for dealing damage and depleting the boss's staples.

Once it uses Bite Barrage and becomes vulnerable while reloading, the 1000-Fold Arms are the best way to deal a ton of damage. Use a Legendary Hammer if you were unable to get the ON Panel out.

Thanks. The long-distance-staple-wasting-barrage tactic is the trick for the Bossotronic version. None of the bosses are that hard in the main story (as befits a child-friendly game) but the Bossotronic replays disable the option of paying Toads for hearts and I kept being wiped out by the gold-staple Bite Barrage. Very frustrating getting wiped out after nearly 10 minutes each time.

One trick we found out is if you attack from further away the boss shoots at you instead of pinning you down. This can waste his staples and spread out the damage over multiple turns to the point that bite barrage does zero damage. This can avoid close calls and you can jump attack him from any distance. Even gold staples only do about 50 damage from a long range barrage.

Register as a member and get all the information you want. (It's free!)
Login
Opinions about an article or post go here.
Opinions about an article or post
We at Game8 thank you for your support.
In order for us to make the best articles possible, share your corrections, opinions, and thoughts about "Boss Battle Guide: How to Beat Stapler" with us!
When reporting a problem, please be as specific as possible in providing details such as what conditions the problem occurred under and what kind of effects it had.