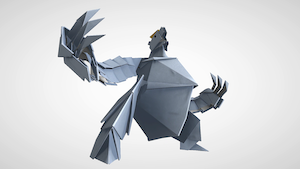 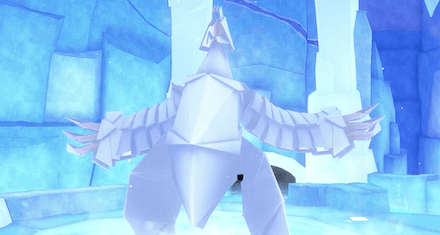 The goal of this battle is the get past the Ice Vellumental's defenses, activate an ON Panel, then use the 1000-Fold Arms to inflict heavy damage. Note that while Ice Vellumental is surrounded in the ball of ice, none of your attacks will hurt it, so you need to try and get rid of the ice. 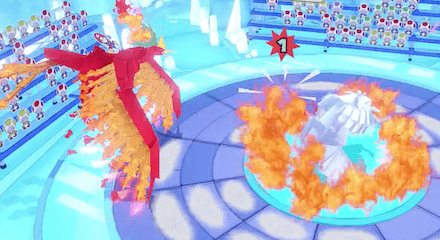 In order to get an ON Panel onto the board, your first move should be targeting the treasure chest that appears, as getting it will add in an ON Panel. You won't be able to attack, but on your next turn, set up a path that allows you to target both the ON Panel and the Fire Vellumental Magic Circle. Doing this will remove Ice Vellumental's shield. 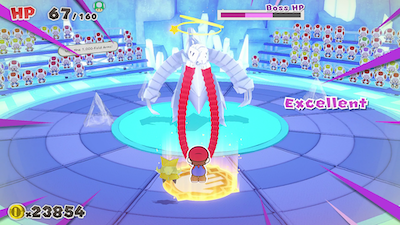 In your next move, you will want to activate the ON Panel again, then land on a Magic Circle to use your 1000-Fold Arms. This attack will deal a significant amount of damage.

The next turns will have the same objective (using the Fire Vellumental to remove its shield, then landing a successful attack with your 1000-Fold Arms), but an extra challenge will be added in the form of the frozen spaces that appear. Avoid walking over the snowy spaces, although the icicles can be removed by pressing R to slide the rows they are contained it, which will cause them to break. Doing this will be essential, as Panels like the ON Panel and Magic Circles may show up underneath the icicles. 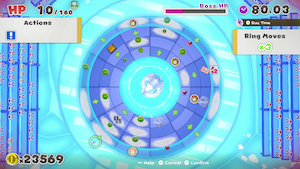 After you take away enough of its HP (usually after the second 1000-Fold Arms attack), the Ice Vellumental will use a new move where it creates an ice maze, then rotates the rings to hide the path. Only three rings will be rotated, so as long as you can remember where they were before being roated, you can set the same path back up and get to the Magic Circle to use another 1000-Fold Arms attack. If the ON Panel is already active, it is also possible to just move the Magic Circle to right in front of Mario, where he can use it immediately after moving.

Two attacks from the 1000-Fold Arms should be anough to finish Ice Vellumental off.

Getting past Ice Vellumental's defenses 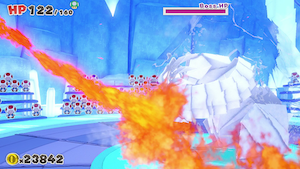 Ice Vellumental will enclose itslef into a ball of ice. During this time, it will be impervious to all attacks, including jump attacks, hammer attacks, and 1000-Fold Arms. You'll need to first get rid of this ice ball by using the Fire Vellumental panel.

Breaking the Ice with Sliding 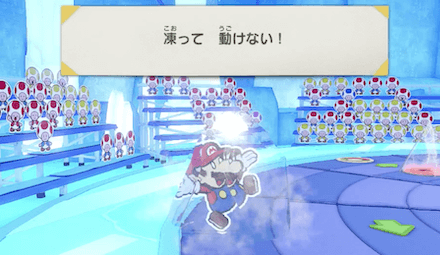 At some point, Ice Vellumental will begin to lay out snow on the ground, and drop icicles onto the map. Walking into these will freeze Mario in his tracks, and he will have to endure a free attack from the Ice Vellumental in the following turn. 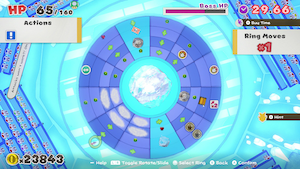 You'll need to use the ON Panels and Magic Circles that are covered by chunks of ice. In order to do that, you can remove the icicles by sliding the rows of the board. Press R to switch from rotating to sliding, and then slide a row until the ice breaks. This will allow you to use whatever was under it. 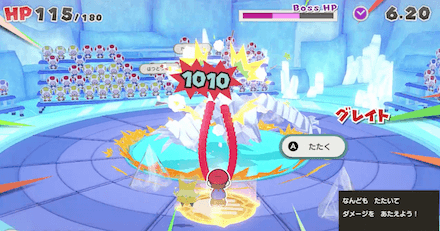 When balled up into ice, Ice Vellumental is invulnervable to any kind of attack. However, it becomes vulnerable after stepping on the Fire Vellumental panel and thawing it out. At this point, any attack will damage it, but the 1000-Fold Arms will do the most damage, so you should opt to use them instead of normal attacks whenever the opportunity presents itself.

If done correctly, Ice Vellumental can be defeated in four attacks from the 1000-Fold Arms.

If you have to fight this guy at the end you can not break up the ice by sliding.When you fight him on Diamond island is easy, if he comes back in the Origami Castle, youre screwed.I took photos of board,spent 45 min studying it, can't make a path to magic circle in only 3 moves, I think Nintendo needs a software update

If you have to fight this guy at the end you can not break up the ice by sliding.I am totally stuck there

Register as a member and get all the information you want. (It's free!)
Login
Opinions about an article or post go here.
Opinions about an article or post
We at Game8 thank you for your support.
In order for us to make the best articles possible, share your corrections, opinions, and thoughts about "Boss Battle Guide: How to Beat Ice Vellumental" with us!
When reporting a problem, please be as specific as possible in providing details such as what conditions the problem occurred under and what kind of effects it had.