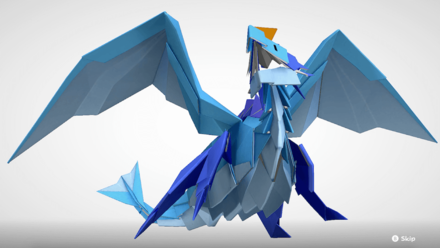 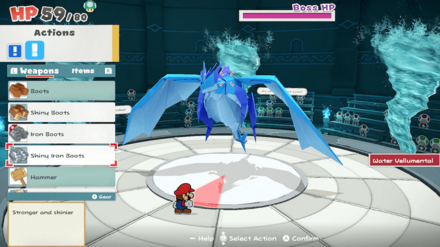 The challenge comes from actually trying to move in and get to an Action Panel without having the arrows or Action Panel erased through Water Vellumental's Wash Away move, which wipes out all panels and arrows in the same row before Mario moves. Water Vellumental will set up water spouts at the beginning of each turn, so make sure that you rotate the rings in a way that both the Action Panel and the arrows on your path do not get erased. 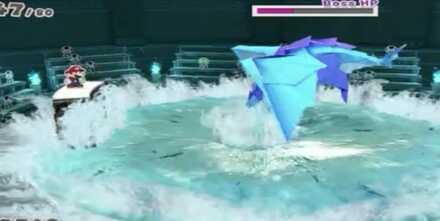 When Water Vellumental soaks up enough water, it will grow very plump and have a ring of water swirling around it. This means it is gearing up for its Big Wave attack. When it is in this state, it cannot be knocked down, so don't even think about using your hammer. Instead, get to one of the Magic Circles that show the Earth Vellumental on them (you will first need to activate it by walking over the ON Panel, if it isn't active). Doing so will lift you above the ground and protect you from this attack.

After Water Vellumental uses Big Wave, it will fall down and be out of energy. This is your chance to move in for an attack with your hammer, uninterrupted by its water spouts. If you can plot a course with an ON Switch and the Magic Circle instead, this is a great chance to deal a ton of damage and maybe even finish it off.

After you attack, if it has HP left, Water Vellumental won't be able to do anything because it is drained of energy, but it will get back up afterward and send out more spouts. At this point, its battle tactics won't really change though. 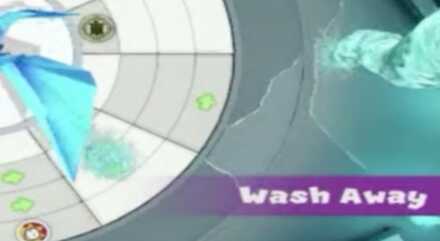 Before you have a chance to rotate the rings, Water Vellumental boss will set up water spout on two spaces around it (later four, six, then eight). After you rotate the rings, it will fire them off toward the outer ring, wiping away any panels (including arrows) that are in the same row. Be sure and keep this in mind when setting up Mario's movement.

If planned out, you can actually use them to your advantage, eliminating arrows that would normally be getting in the way of your desired course. Essentially, you can just imagine that the rows with water spouts are completely empty when setting up Mario's movement. 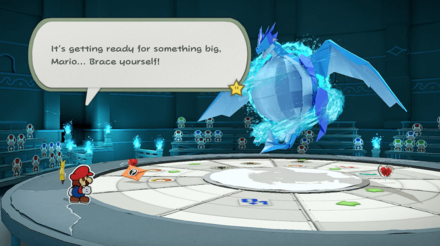 In this battle, there are two types of Magic Circles, which are both activated by walking over the ON Panel. One of them has what looks to be a turtle on itーalthough it is actually the Earth Vellumental you fought earlier. Make the objective of this turn to get to this panel, as it will raise the ground you are on, and protect you from Water Vellumental's attack. 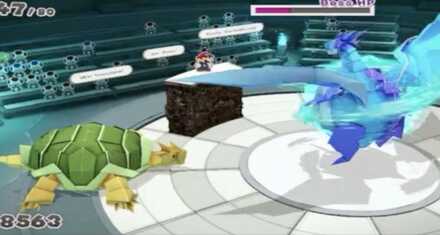 Weapon Changes Based on Position

Anytime the Water Vellumental boss is flying in the air, Boots will be your go-to attack. On the other hand, you should use the Hammer when it has fallen down. After it gets tired from using the Big Wave attack, approach and attack with either the 1000-Fold Arms or a Hammer.

Register as a member and get all the information you want. (It's free!)
Login
Opinions about an article or post go here.
Opinions about an article or post
We at Game8 thank you for your support.
In order for us to make the best articles possible, share your corrections, opinions, and thoughts about "Boss Battle Guide: How to Beat Water Vellumental" with us!
When reporting a problem, please be as specific as possible in providing details such as what conditions the problem occurred under and what kind of effects it had.