The battle begins with the Scissors keeping its blades sheathed. During this phase, you should always target the handle of the Scissors, and not the sheath. The Scissors will change the position of its blade and handle each turn, so when selecting what weapon to use, make sure the target will be the handles.

When the handles are on the ground, you should use a hammer attack, but when they are up in the air, you should use a jump attack instead. Do not use the 1,000-Fold Arms in either position, as they will break its cover.

Be sure and use the treasure chest and make use of the various panels released. If you can put an x2 damage or bonus attack panel on your path to an action panel, and use a strong weapon like Legendary Boots or Legendary Hammers, you can do a ton of damage and end this phase very quickly. 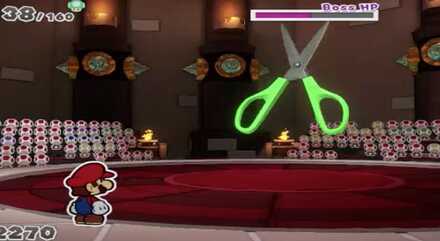 In phase 2, Scissors unsheathes itself. There are now two important things to note: 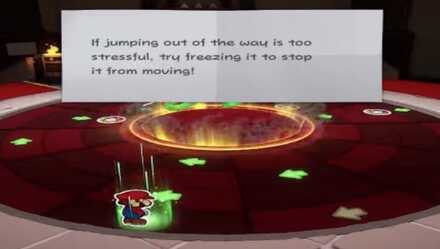 You can attack the Scissors in this phase using hammers (be sure not to jump attack), but the best method is to use Magic Circles to freeze it, then attack with the 1000-Fold Arms. On your way towards an action panel, you'll need to open a treasure chest, which will spread ON Panels and Magic Circles all over the board. On your next turn, set up a path to the ON Panel and the Ice Vellumental (Polar Bear), which will allow you to freeze it.

Once it is frozen, it will be unable to move or cut away any panels. This is your chance to plot a course to the ON Panel and then the 1000-Fold Arms panel. The attack from the arms will deal a ton of damage. Repeating this process twice will let you finish the Scissors off.

Do not attack the sheath 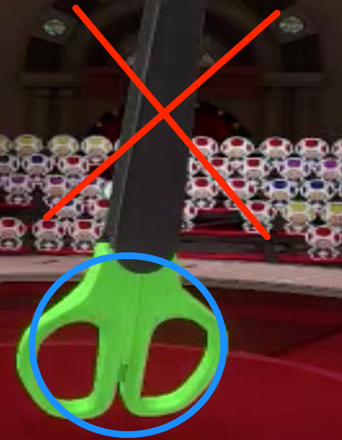 For the first phase, Scissors remains sheathed. It cannot one-shot you during this stage, so try and damage it as much as possible by attacking the handles only, until it removes them. Check the target of the attack you are about to use, and change weapons appropriately.

Don't use jump attacks in Phase 2!

During phase 2, a jump attack onto the Scissors will also end in Mario getting one-shot KO'd. If you do end your turn on an Action Panel instead of a Magic Circle, use a hammer instead.

Depends on position when sheathed

In the second phase, you can attack with a hammer, but the 1000-Fold Arms will deal a lot more damage. However, in order to use them, you'll first want to use the Magic Circle of the Ice Vellumental to freeze it.

Ice vellumental did not pop up as one of the tile for me the entire fight. Also enemy attack every single time was “final cut” which ends ur life if you get hit. I used legendary the entire time but it was pretty east to line up shots. Just took a lot of repeating

Register as a member and get all the information you want. (It's free!)
Login
Opinions about an article or post go here.
Opinions about an article or post
We at Game8 thank you for your support.
In order for us to make the best articles possible, share your corrections, opinions, and thoughts about "Boss Battle Guide: How to Beat Scissors" with us!
When reporting a problem, please be as specific as possible in providing details such as what conditions the problem occurred under and what kind of effects it had.