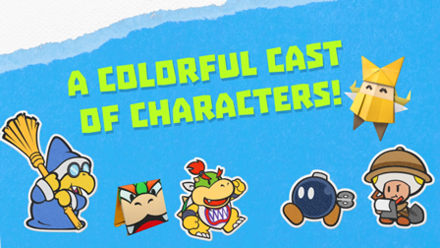 This is a list of all companions (all partners) that appear in Paper Mario: The Origami King for the Nintendo Switch. Read on to see all confirmed companions/partners and characters!

All Companions | All Partners

Except for Olivia and enemies, various characters will temporarily accompany Mario at different areas of the game. Here is a list of all major partners of Mario, in order of appearance. 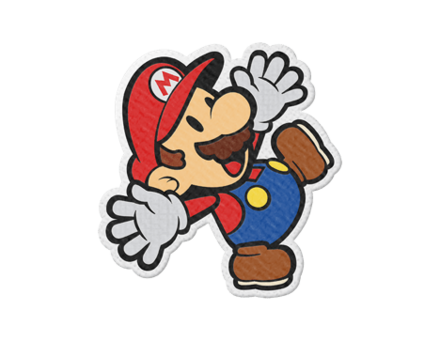 Can Mario be his own companion? Of course! Mario is the only playable character, outside of Ring Battles, in Paper Mario: The Origami King, and appears at the very beginning, riding along with his brother Luigi, on a Kart. 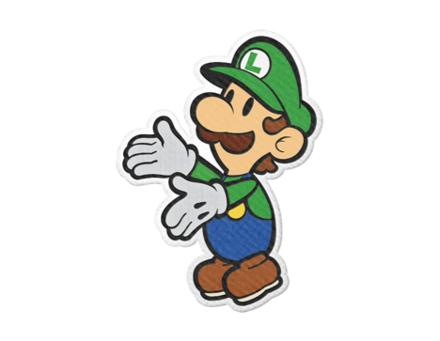 Mario's first companion in the game is Luigi, but Luigi will constantly leave to go on his own quests. Mario will occassionally reunite with Luigi, with Luigi providing essential information and items for the story's progress.

How to Find Luigi 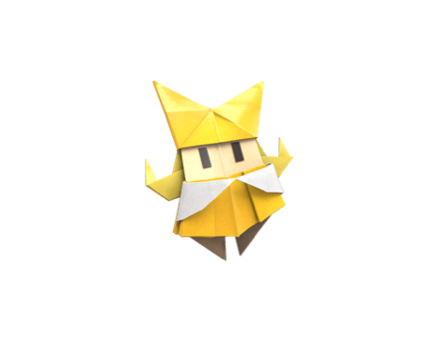 Olivia is the only companion that stays with Mario from beginning to end. She is introduced in the Prologue, after Mario frees her from the dungeon wall. Olivia will be Mario's trusted guide and friend throughout the game. She can even learn the ability to transform herself into the Vellumentals you defeat in battle!

If you're looking for spoilers for the ending, you can find out what happens to Olivia at the end here:

What Happens to Olivia? 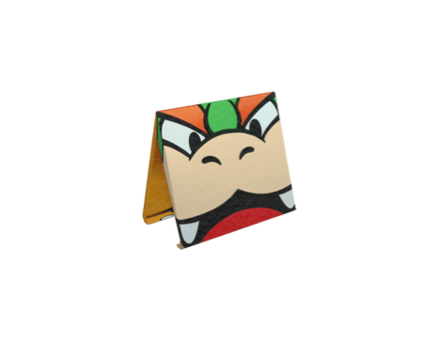 After freeing Olivia, Mario also frees a folded Bowser from the dungeon. He becomes Mario's companion for a short time in the Prologue, then gets separated from Mario and Olivia after the Streamers carry Peach's Castle away. He doesn't return to his unfolded form until Mario reaches the Origami Castle, where he helps Mario and Olivia defeat King Olly. 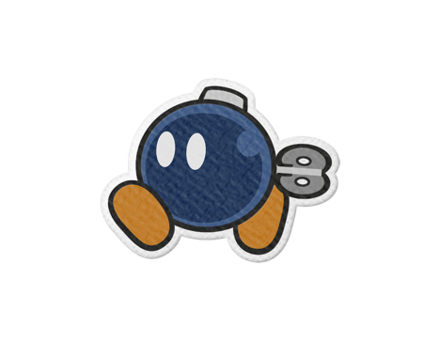 Mario will meet Bobby the amnesiac Bob-omb at Autumn Mountain, and will have to save him twice at Chestnut Valley. He will become Mario and Olivia's companion, regain his memory, and save the life of someone very important! 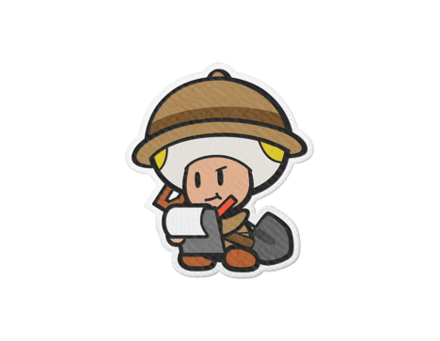 Professor Toad becomes Mario's companion at Scorching Sandpaper Desert. He will help you did shining spots in the sand! 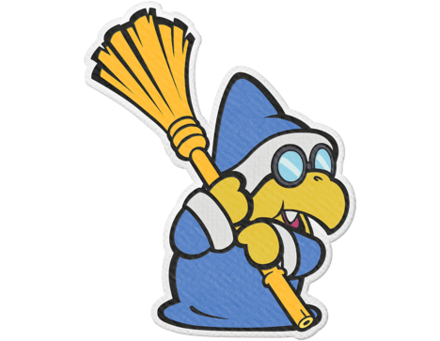 Kamek becomes Mario's companion at Shangri-Spa, to find a way in and through Bowser's Castle, which has fallen on Shangri-Spa's Banquet Hall. He is also instrumental in getting through Spring of Jungle Mist and Hotfoot Crater. 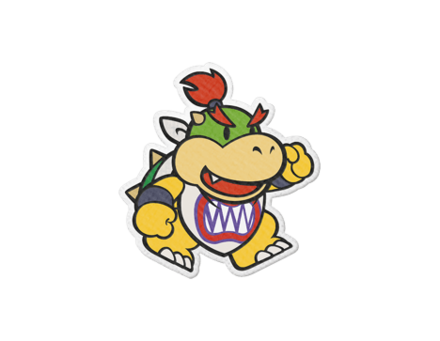 Not long after meeting Kamek, Bowser Jr. flies in towards Shangri-Spa in a clown car. However, he is immediately cut into pieces by a giant, flying pair of scissors. Bowser Jr. sticks around with Kamek, and also becomes Mario and Olvia's companion for much of their time at Shangri-Spa. In order to use the clown car to enter Bowser's Castle, Bowser Jr. must be restored to his original form.

During the Can Opener objective at Autumn Mountain, a Spike and a Bone Goomba will accompany you for a short time. If you happen to start a battle while these characters are following you, they will also follow you into battle!

You won't be able to directly switch to and control any of your companions, but some will provide field abilities that Mario doesn't have. For example, Professor Toad can dig shining spots in the desert, for more coins or items.

You won't have to worry about choosing the right companion to get through an area. It is part of the story for a character to automatically join you when you arrive at the place where they're needed. 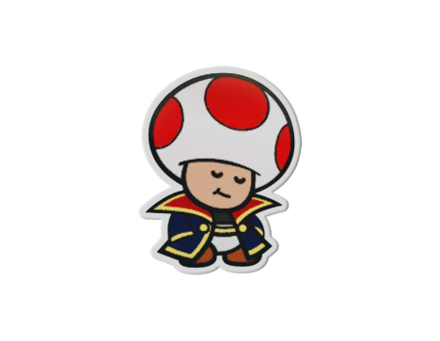 After rescuing him from the Scorching Sandpaper Desert, he'll give you The Great Sea's Sea Chart, at Toad Town! 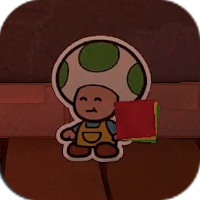 After gaining access to the backyard on Mushroom Island, you'll Mario and Luigi will be able to free the Origami Craftsman from the basement wall. He reveals himself as Olly's creator! Though he doesn't become a companion, he is still instrumental in the story's progress. 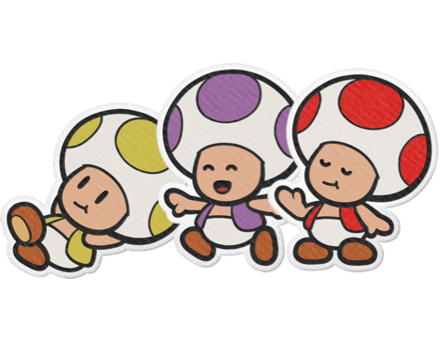 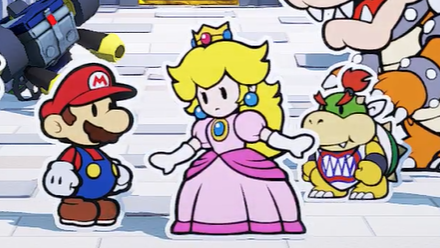 Though Princess Peach appears in her brainwashed origami form for most of the story, she reverts to normal after Olivia's wish. She does not become a companion during gameplay.

While they're with you, companions will join you in Ring Battles and help you defeat your enemies. Check the list of Paper Mario's Battle Partners below:

Olivia will always be your battle companion. Aside from showing you the ropes in battle, Olivia will eventually learn to transform herself into the Vellumentals that you defeat in Battle. These Vellumental forms can then be used to defeat the other Vellumentals and Bosses that you fight throughout the game.

While Bobby is with you in the field, he will be your companion in Ring Battles. Bobby's Bomb Bump has a low base attack power, but some of our team members have been able to get as much as 20 attack from good ol' Bobby. We are investigating what leads to this attack boost.

As Mario's battle companion, Kamek can attack enemies in a 2x2 formation, during Ring Battles.

As long as Bowser Jr. is with you, he'll join you in battle as well!

As Mario's battle companion during Phase 2 of the battle with King Olly, Bowser will transform into a giant origami and fight Olly "Paper Sumo"-style.

After rescuing Toads from their origami forms, they will be your constant companions and cheer you on during Ring Battles, and even provide battle items and attacks, in exchange for coins!

If you happen to start a battle while these characters are following you at Autumn Mountain, they will also follow you into battle! 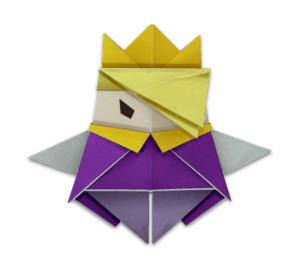 Olivia's brother (and creator) Olly has transformed Princess Peach and Bowser's minions into origami that does his bidding. It's up to Mario, Olivia, friends, and past foes to put a stop to Olly's quest to take over the kingdom. You do not want this one as your companion. 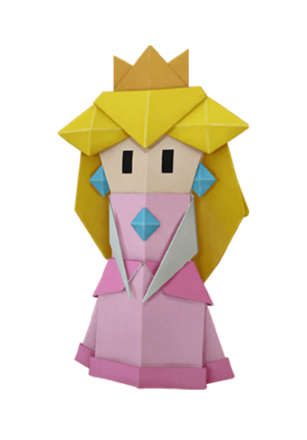 Princess Peach is no longer her usual, kind self, after Olly brainwashes her and folds her into origami. At the beginning of the game, she traps Mario in her castle's dungeon and joins King Olly. Your goal is to make her your companion again.

There is a god for each element: Earth, Water, Fire, Ice. They function as the bosses of each temple/shrine you visit. They aren't companions, but your companion, Olivia, eventually learns how to transform into them!

How about you update your articles after the trailer, and then again after release? It would make your website seem a lot more up to date and competent.

Register as a member and get all the information you want. (It's free!)
Login
Opinions about an article or post go here.
Opinions about an article or post
We at Game8 thank you for your support.
In order for us to make the best articles possible, share your corrections, opinions, and thoughts about "List of Companions | List of All Characters | Origami Character Gallery" with us!
When reporting a problem, please be as specific as possible in providing details such as what conditions the problem occurred under and what kind of effects it had.