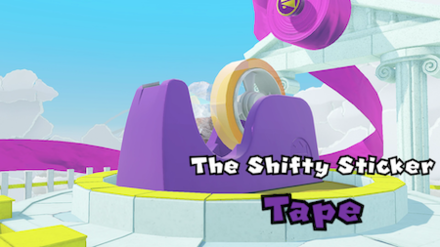 This is a walkthrough for beating Tape, one of the bosses in Paper Mario: The Origami King for the Nintendo Switch. This guide will cover boss strategy, the best weapons to use, as well as other tips and tricks for beating Tape. 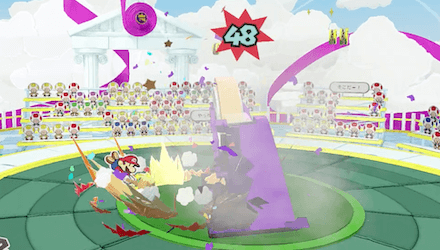 The beginning of this battle is quite straightforward. The only thing you need to do is target the four sides of the tape dispenser (near the corners) and attack with a hammer. This will crack the area, or if you dealt enough damage (via a stronger hammer/excellent attack), the section will break. Once you've broken an area of the tape dispenser, simply try and move the Action Panel to a different side of the tape dispenser and repeat.

At first, there will be very few panels on the map, so be sure and walk over the treasure chest that shows up to spread out bonus panels, which will make breaking sections of the dispenser off go by even faster. In addition to the hammer, you can use the Magic Circles (Fire Vellumental or 1000-Fold Arms) to damage Tape boss, although the change in damage dealt doesn't seem all that significant, so you don't need to go out of your way for them. 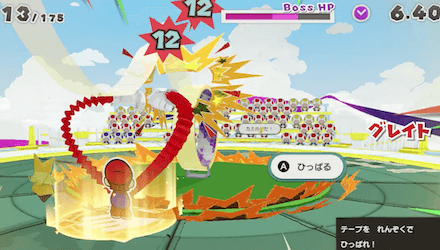 After breaking all four sides of the tape dispenser, the tape will seemingly be defeated, but it will then reappear with full health. The battle will change significantly, and tape will now not have the dispenser around it. At this point in the battle, regular attacks will become totally useless, and you will instead need to attack via the magic circles.

At the start of each turn, Tape boss will also use Roll Out, where it rolls around the board and tapes up panels. This will make certain rings or slices of the map unable to be rotated/slid. As more and more tape is added to the board, it will become very hard to move the panels around to get a panel you want, so every two turns or so, you should use the Fire Vellumental panel to burn away the tape. 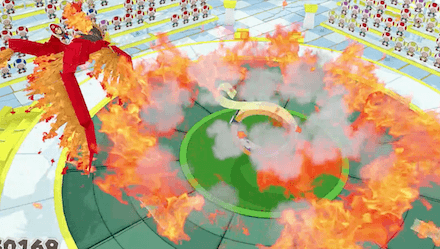 At some point, the Tape boss will begin charging up and emitting a light around it. During this time, the only way to damage it will be by using the Fire Vellumental panel. The 1000-Fold Arms are ineffective during this move's duration.

Luckily, Tape boss can be defeated with about two uses of the 1000-Fold Arms. It will gradually lose HP when it uses Roll Out and when the Fire Vellumental is summoned, so two well timed 1000-Fold Arms attacks should be enough to end the battle. 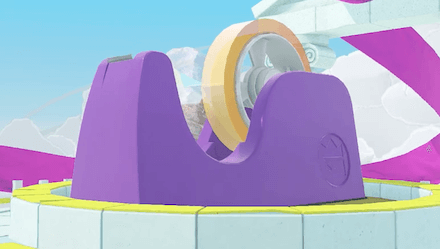 By this point, you have probably become used to bosses laying out obstacles all over the battlefield, so this move is nothing new. Its function is essentially to bind certain rings / slices of the board together, to prevent you from rotating or shifting them. Unlike the icicles or molten feathers, however, stepping over the tape has no negative effect, so the hardest part is simply using the board to get where you want to go.

The taped up panels can be freed by using the Fire Vellumental magic circle, but Tape boss will use the move again shortly after, so you are better off trying to use these Magic Circles every other turn or so (if you wait too long, it will become pretty hard to remove it though).

Tape boss actually loses HP when it uses this move, so it is advantageous in a way to have it be used once or twice, at which point the tape can be burned away. Once it has lost enough HP, it will stop using this move though, so movement will become much easier.

During the entirety of this battle, you should avoid using jump attacks. When attacking the tape dispenser, you usually should just line up an Action Panel on an unbroken side, then hit it with a hammer, however, the 1000-Fold Arms and Fire Vellumental can damage it as well.

The 1000-Fold Arms are the only way to inflict a lot of damage during this stage, so they are the go-to attack you should aim for. However, when Tape boss begins emitting a yellow light, the 1000-Fold Arms will no longer work, so you should use the Fire Vellumental if you want to hurt it at this stage.

If it has lost enough HP due to the Fire Vellumental summon and chip damage from using Roll Out, you can defeat it in about two hits with the 1000-Fold Arms.

The BEST weapon against tape is... Fire and Ice Flower! It would take 2 turns if you attack the front first and the back, and four turns if you want to attack all sides. Hammers make it a bit slower. That is why you SHOULD use fire and ice flowers against tape!

Register as a member and get all the information you want. (It's free!)
Login
Opinions about an article or post go here.
Opinions about an article or post
We at Game8 thank you for your support.
In order for us to make the best articles possible, share your corrections, opinions, and thoughts about "Boss Battle Guide: How to Beat Tape" with us!
When reporting a problem, please be as specific as possible in providing details such as what conditions the problem occurred under and what kind of effects it had.