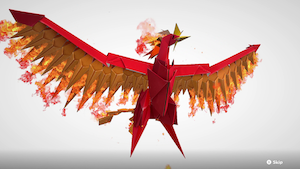 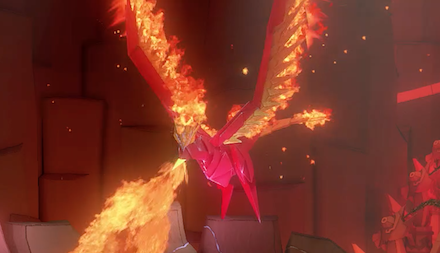 The main goal of this battle is to move toward an Action Panel so that you can damage the Fire Vellumental with Jump Attacks (via the Iron Boots). Along the way, you'll want to avoid Fire Vellumental's Molten Feathers, as they can deal a lot of damage. When possible, be sure and walk over one of the treasure chests, as they will add Water Vellumental panels to the board (which will come in handy later in the battle).

In order to rack up the most damage, try and make use of the various bonus panels that show up such as x2 Damage and the extra action panel. Note that you won't be able to use the 1000-Fold Arms while the Fire Vellumental is still ablaze, so avoid Magic Circles for now, and primarily focus on getting the boss down to around 25% HP (or a little bit less). You'll need to jump on it with the iron boots 5~6 times.

Its attacks plus the molten feathers can tack on a ton of damage quickly, so keep an eye on Mario's health, and try to pick up a heart if needed. 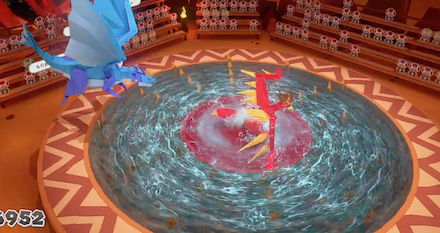 For your first move, arrange the panels so that you can open a Treasure Chest and land on an Action Panel in one go. This way, you get to attack and get to use the Water Vellumental Panel, that was inside the chest, for the next move. For your next move, make sure you pass the ON Panel and land on the Water Vellumental Panel. This will extinguish the Fire Vellumental and its Molten Feathers for one turn, making it easy to damage it with Jump Attacks, without damaging yourself. 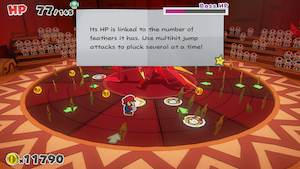 The “gimmick” of this battle is essentially the molten feathers the Fire Vellumental casts all over the board at the beginning of each turn (from turn #2). Like the bumper bands that Rubber Bands used, Fire Vellumental will lose some HP when it spreads these out. When Mario steps onto a space with one of these laid on it, he will take 8~9 damage.

As the battle progresses, Fire Vellumental will spread more and more of these, and some spaces may even have multiple feathers on them, which can deal a ton of damage if stepped on. As much as possible, you should try and avoid these, but if you have enough HP to spare, it is okay to walk over a couple in order to reach your goal.

Using the Water Vellumental space will extinguish Fire Vellumental's flame and all of the feathers, but it will regenerate all of its HP after you attack with the 1000-Fold Arms, so you should not do this too early. Make sure to only go for this attack when you are sure it will be enough to finish it off.

For the first part of the battle, you should focus on landing on Action Panels so that you can widdle the boss's damage down by using Jump Attacks with Iron Boots (its HP also drops as it sends out feathers). Once it has gotten to about half HP, you need to get the the Water Vellumental space, which will extinguish Fire Vellumental's flames, as well as the feathers on the board. With less than half of its HP remaining, you should be safe to use a Magic Circle and attack with your 1000-Fold Arms.

If done successfully, its HP will drop down to the very last bit, where it can be finished off with a single punch from the arms. However, if it had too much HP when you started the attack with your arms, it will retract all of its feathers and regain full HP, so do not go in for the 1000-Fold Arms attack until Fire Vellumental has lost significant HP (a little over 75%).

The only way to damage the Fire Vellumental when it is enflamed is to use the Iron Boots. Since your main goal will be do widdle down it's health past the halfway mark, we recommend using Shiny Iron Boots for the damage boost if you have them.

As mentioned above, you should use the 1000-Fold Arms when the Fire Vellumental's HP gets below 25%. To do this, you will first need to activate one of the Water Vellumental panels, then on your next move, hit an ON Panel and land on a Magic Circle to inflict massive damage.

"With less than half of its HP remaining, you should be safe to <...> attack with your 1000-Fold Arms" and "do not go in for the 1000-Fold Arms attack until Fire Vellumental has lost <...> a little over 75%" directly contradict themselves!

Register as a member and get all the information you want. (It's free!)
Login
Opinions about an article or post go here.
Opinions about an article or post
We at Game8 thank you for your support.
In order for us to make the best articles possible, share your corrections, opinions, and thoughts about "Boss Battle Guide: How to Beat Fire Vellumental" with us!
When reporting a problem, please be as specific as possible in providing details such as what conditions the problem occurred under and what kind of effects it had.