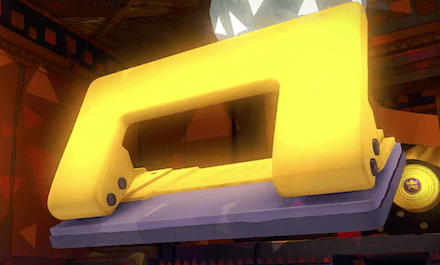 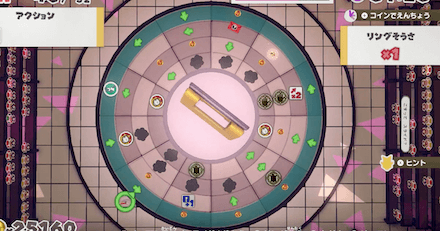 From the start of the boss battle, Hole Punch will put numerous holes in the ground and hole punch the ON Panel, so you won't be able to use those 1000-Fold Arms just yet. The objective of this first section of the boss battle is to set an Action Panel behind Hole Punch (on the black undersideーmake sure this is either on the innermost ring or one before it), then move in and attack with your hammer. 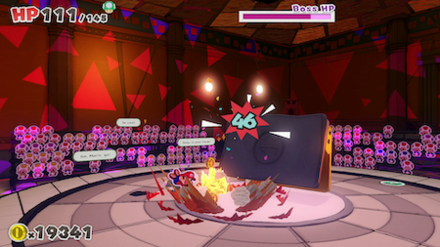 Do this repeatedly while making sure to avoid the holes on the board and reclaim your cut-out pieces any time they get punched away. When possible, be sure and pick up the treasure chests, and any action bonuses like x2 damage or the extra attack.

Once the ON Panel shows up again without holes, activate it, but do not step on any of the Magic Circles just yet, and instead focus on dealing damage by hammering from behind.

Once you have given enough damage to the Hole Punch, it will glow yellow and begin charging up. Use this turn to make your way over to the turtle-shaped space (first stepping on an ON Panel if they are not active), and then summon the Earth Vellumental. This will deal a little bit of damage and also cause Hole Punch's attack to miss completely. However, in addition to this, it will flip Hole Punch over, which stops its movement and makes it very vulnerable to the 1000-Fold Arms.

Line up an ON Panel and the Magic Circle, and then use the 1000-Fold Arms to pound Hole Punch while it is turned over. If its HP was low enough, you might even be able to finish it off with this attack. If not, the battle will continue, but Hole Punch's tactics will not change, so you can continue using the same strategy. 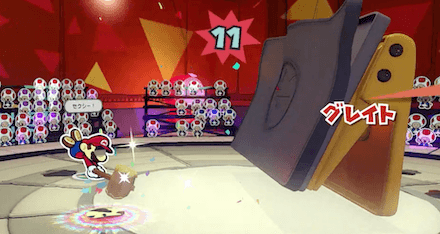 Hole Punch can not be damaged from its hard yellow area. Instead, you should go behind it and hit the black area with a hammer. The black underside is its weakpoint, so always make sure you attack there instead!

Hole Punch will start off each turn with a move, also called Hole Punch, where it randomly puts holes into a few of the spaces around the board. In addition, it will punch out the ON Panel, rendering it useless at first.

If Mario's path has him crossing any of the holes, he will fall inside, ending his turn immediately. This will also cause the boss to use an attack called Main Squeeze, which will deal 15 damage to Mario. Whatever you do, be sure and avoid falling into a hole! 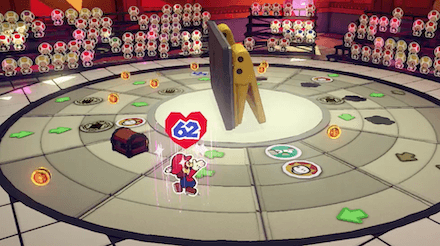 When Mario is attacked from up close, the boss will use an attack ALSO called Hole Punch (big surprise). This will cut down Mario's maximum HP by almost half!

When this happens, you should reclaim Mario's cut out pieces from around the board in order to restore the max HP he can hold. Getting punched multiple times will allow Mario to only hold a small amount of HP, so be sure and reclaim his punched out pieces each time.

For the first phase of the battle, the only effective method of attacking is to approach from behind and use the hammer. Keep in mind that the action panel must be lined up with the black underside of the Hole Punch, and it needs to be no more than two spaces away from the boss in order for the hammer to make contact.

Once Hole Punch reaches this phase, you should avoid its attack, using the Earth Vellumental panel. After it is stunned, you can use a hammer to hit it, but going with the 1000-Fold Arms will allow you to do a lot more damage.

Register as a member and get all the information you want. (It's free!)
Login
Opinions about an article or post go here.
Opinions about an article or post
We at Game8 thank you for your support.
In order for us to make the best articles possible, share your corrections, opinions, and thoughts about "Boss Battle Guide: How to Beat Hole Punch" with us!
When reporting a problem, please be as specific as possible in providing details such as what conditions the problem occurred under and what kind of effects it had.