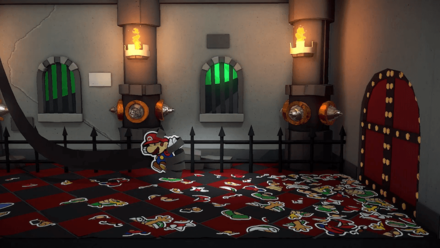 In the first phase of the battle, you will be tasked with saving Olivia from the Handaconda's clutches. Since you don't have Olivia, you will be unable to use any of the Magic Circles, so you're left with only regular action panels as your form of offense.

Jump attacks will lead to the Handaconda catching and hurting you, while any type of throwable hammer will also be caught by the boss. Instead, use a strong hammer that hits the ground (like a Legendary Hammer, if you have one).

If you place the action panel in the centermost row, Handaconda will flick it off the stage, wasting your turn, so make sure you place it on the ring just before the center one. If you can, snag an x2 damage or bonus action panel along the way to increase your attack's damage. 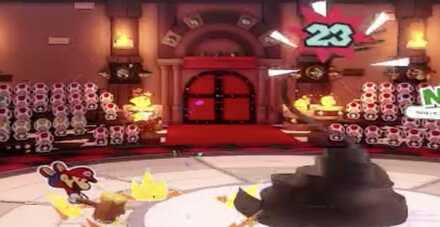 Repeat this step, and Olivia will be freed, coming back to assist you in using Magic Circles. 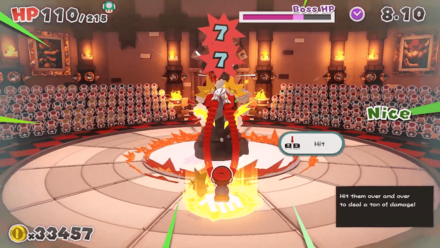 After Olivia rejoins you, the panels will transform, and the only Magic Circles that you will be left with are Rock, Paper, and Scissors ones. In this section, you must simply choose the right panel to move to, win at rock, paper, scissors, and then enter rush time to deal a ton of damage. A draw will simply reset your position, but losing will result in the Handaconda attacking you, although you will have a chance to guard.

Win three times and hit the Handaconda repeatedly, then the battle will be over.

Unlike other boss battles where you need to use ON Panels to activate Magic Circles, the ones in the second phase of this battle are always active, however, they make Mario select whichever of the three that he lands on to use in Rock, Paper, Scissors. This is literally just a basic game of RPS, where Rock beats Scissors, Scissors beats Paper, and Paper beats Rock. You want to end up on the right space to win and deal damage, and it doesn't get any more complicated than that.

Although the Handaconda will show various hand symbols which would make you think there is some hint about which symbol it will throw out, it seems as though the Handaconda's move during RPS is totally random, so there is no way of knowing what it will throw out, and you just have to give it your best guess. If you discover a way to find out which one it will use during its turn, please let us know in the comments!

Jump to the Comments

As mentioned above, jump attacks and throwing hammers are totally useless in this battle, so you should instead rely only on hammers that hit the ground. Using a strong hammer like the Legendary Hammer in combination with an x2 panel or extra attack panel is a certain way to deal a lot of damage early on.

In the second phase, you won't be able to use any weapons other than the Magic Circles, so try and win in Rock, Paper, Scissors, and when you do, enter Rush-time and strike the boss repeatedly.

Register as a member and get all the information you want. (It's free!)
Login
Opinions about an article or post go here.
Opinions about an article or post
We at Game8 thank you for your support.
In order for us to make the best articles possible, share your corrections, opinions, and thoughts about "Boss Battle Guide: How to Beat Handaconda (Shadow Hand)" with us!
When reporting a problem, please be as specific as possible in providing details such as what conditions the problem occurred under and what kind of effects it had.