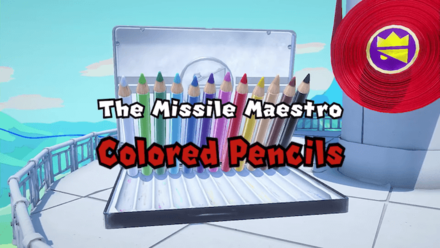 During the first phase, your main objective is to create a path that takes you to the backside of Colored Pencils so that you can close its lid and cause it to fire on itself and take damage. Doing this also stuns it temporarily, allowing you to move to its open side to get in another hit.

In order to close Colored Pencils' lid, either hit it with a hammer from one of the three spaces directly behind it (in the innermost ring), or close it using your 1000-Fold Arms! You will need to set up the ring so that there is either an Action Space or Magic Circle behind Colored Pencils, and that Mario will finish his move there. In order to use the 1000-Fold Arms, you have to activate the Magic Circles by first crossing over the ON Space. 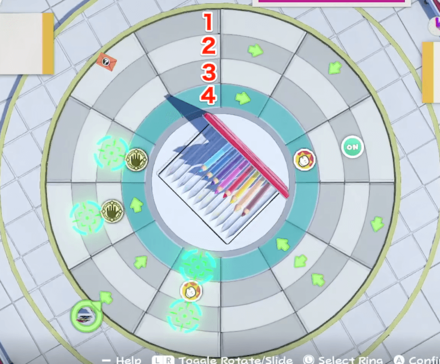 Note that missile target positions and some other panels will vary. The path we describe is only one of many options.

For the first turn, you should turn the innermost ring (4) once counter-clockwise, and the ring that has the ON Panel (2) once clockwise (this is assuming that no missile targets are in your way). The space that you end on should let you either attack with your hammer, or use your 1000-Fold Arms to close the lid. 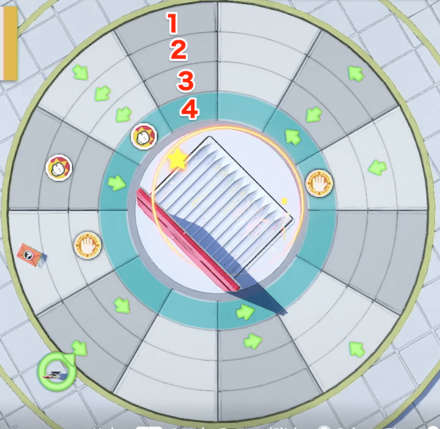 Now that the boss is stunned, you don't need to worry about missiles, just make sure you can land on the Action Panel while it is positioned in front of the boss's open side. As long as you move the action panel in the innermost ring (4) six times clockwise, you will be able to move right to it for a hammer or boots attack. If any treasure chests spawn, you may want to move them in the way so you can get some coins and HP. It will attack you after your attack, so be ready with a block! 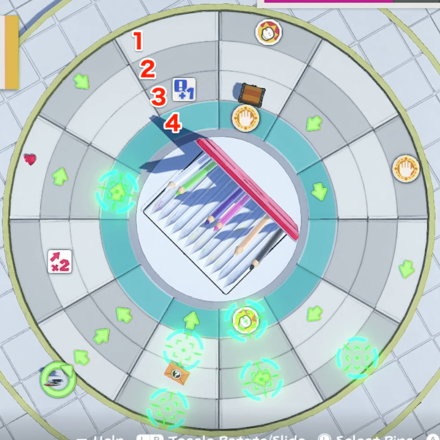 The idea this time is exactly the same as the first turnーsneak up behind the boss and close the lid by either ending your turn on a First shaped space, or a Magic Circle (after the ON panel has been activated). Move the outermost ring (1) four times clockwise, and the innermost ring (4) three times counter-clockwise to avoid the missiles and move directly to the action space, where you can shut the lid with a hammer again. 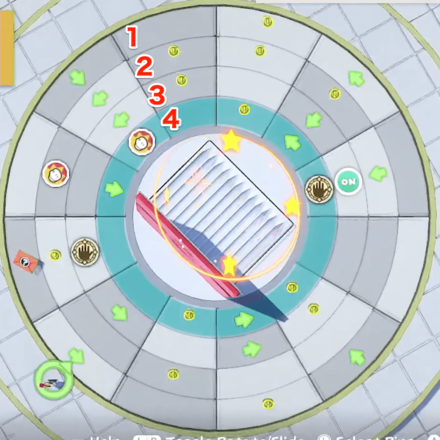 Once again, you'll need to move to the open side and unleash an attack by landing on an action space. The easiest route is to move the innermost ring (4) six times clockwise. If the Magic Circle is off, you should also try and position the ON space so that you can activate it on your way to the action space. If it is already active, maybe use your extra moves to pick up treasure/coins along the way. Attack with your hammer or boots once you arrive at the action space. 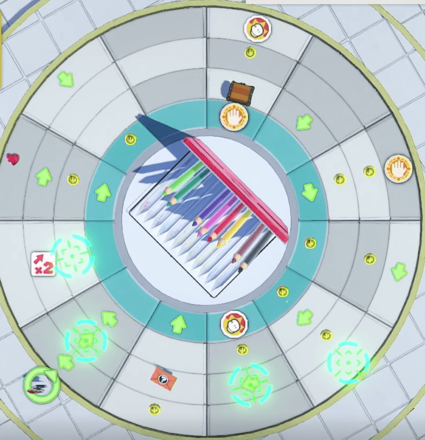 About halfway through the battle, Colored Pencils will change up its tactics. It will begin spinning its pencils in a circle (called a Rainbow Roll) so that it can fire them off like a machine gun. While this is happening, you will be unable to close the lid from behind via the hammer or arms anymore.

During this phase, you'll instead want want to position the ring so that a Magic Circlee shows up in front of the Colored Pencils. First, you need to align your path so that you will walk over the ON space. Then, approach it directly, and after landing on the Magic Circle, use the 1000-Fold Arms to grab the pencils and slam them into the boss! This will allow you do do a ton of damage.

It is also possible to damage Colored Pencils by simply hitting the open section with a weapon like the hammer, but if possible, go for the 1000-Fold Arms attack instead. If Colored Pencils does fire its Rainbow Roll at you, be sure and time your blocks properlyーit shoots in threes until it runs out of pencils, and not blocking any of them will cause you to lose a lot of HP. 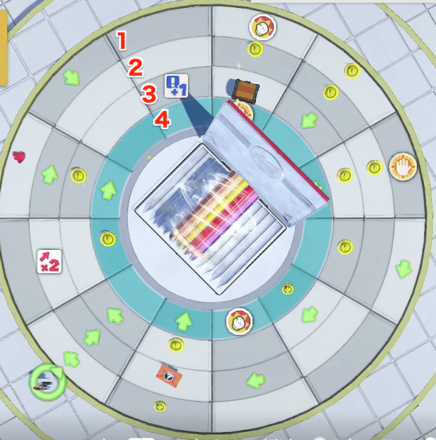 If you already have the Magic Circles activated, then great! All you need to do is end your turn on one of them. Spin the outermost ring (1) three times counter-clockwise, turn ring #3 to move the arrow out of the way, then turn the innermost ring (4) five times counter-clockwise and you will be able to grab the colored pencils, and then slam them. You should be able to enter Rush-time!, which should allow you to slam enough times to finish the boss off.

If you weren't able to finish it off, in the next turn, you'll need to re-activate the ON switch, then get to another Magic Circle positioned in front of the boss. This time, you will most likely enter Rush time! while slamming the colored pencils, which will allow you to do enough damage to end the battle. 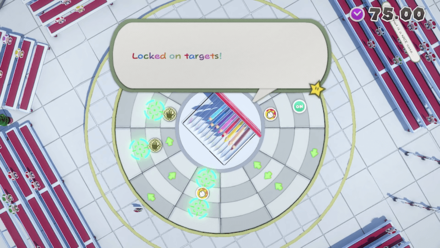 As each turn begins, the Colored Pencils will lock onto several spots on the map indicated by green targets. Walking over on one of these during your turn will result in taking damage from the boss's missile, so make sure to avoid stepping on them.

The spaces targeted are random, and change each turn, so be sure and take your time moving the rings around so that you do not step on them. 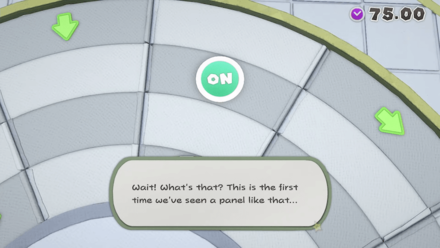 An ON Panel shows up in the beginning of this battle. Walking over it will turn the Magic Circle (Hand Space) on, which will allow you to use your 1000-Fold Arms when landing on it. After using the 1000-Fold Arms once, the Magic Circles will be turned off, so you will need to step on the ON panel again in order to turn them back on. 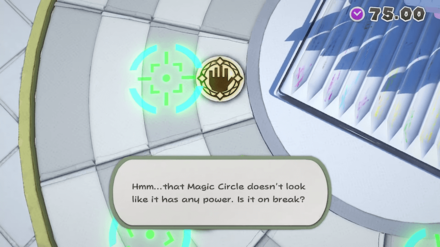 In Phase one, you can use either your hammer or arms on the back side of the boss to shut the case and cause it to inflict self damage. However, during the second phase, you will need to make sure that the Magic Circle is in front of Colored Pencils so that you can land in front of it, grab its pencils, then slam them into the case.

The treasure chests that show up in this battle will spread coins and health all over the map when walked on. Assuming you have enough HP, you don't need to go out of your way for them, but activating them when they are on your path will allow you to pick up extra coins and HP. 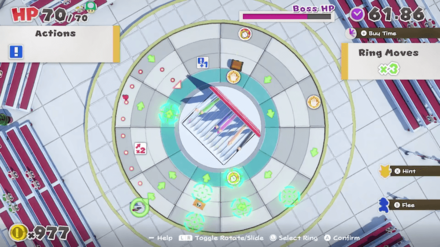 As mentioned above, either the Hammer or 1000-Fold Arms can be used against the Color Pencils when attacking from behind, so use either item, depending on whether the space behind Colored Pencils is an Action Panel or a Magic Circle.

The hammer will let you deal a little bit extra damage, and using them will save you from having to activate the ON panels again, so use the hammer at the boss's backside when possible. You can target any of the three spaces of Colored Pencils' backside, but you need to be attacking from the space directly behind it to close the lid with the hammer.

After it stuns itself, approach from the front, and attack with a weapon like the Hammer or Boots.

The 1000-Fold Arms will allow you to deal the most damage during this phase. After making sure the Magic Circles are active by walking over an ON space, set the ring up so that a Magic Circle is in front of it, then move the ring appropriately and land there. Grab the Colored Pencils and slam repeatedly for the most damage.

(Attacks from other weapons, like the hammer, will still deal damage if hitting the open part of the enemy.)

Register as a member and get all the information you want. (It's free!)
Login
Opinions about an article or post go here.
Opinions about an article or post
We at Game8 thank you for your support.
In order for us to make the best articles possible, share your corrections, opinions, and thoughts about "Boss Battle Guide: How to Beat Colored Pencils" with us!
When reporting a problem, please be as specific as possible in providing details such as what conditions the problem occurred under and what kind of effects it had.