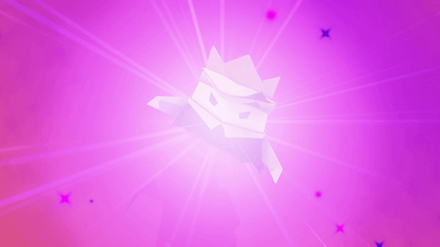 This is a walkthrough for beating King Olly, the final boss in Paper Mario: The Origami King for the Nintendo Switch. This guide will cover boss strategy, the best weapons to use, as well as other tips and tricks for beating all three phases of King Olly, the last boss.

As many last bosses do, this battle will take place in multiple phases, with the first one having multiple segments of its own.

During this phase, King Olly, the final boss, will use the power of the Vellumentals to transform himself and take on their forms. The battle strategy for each one is mostly the same as the first time you fought them all, but with a few changes in each. He can turn into any of the four forms, although the order is random, but it is sometimes possible to beat Olly in just two forms.

Note that in this boss fight, Olly can recover HP if you take too long planning, so try and set up your movements quickly to avoid dragging out the battle. 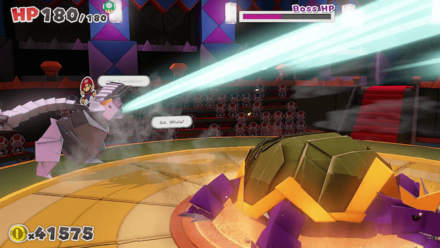 Although King Olly looks and attacks exactly like the Earth Vellumental you fought earlier in the game, the battle strat is very different. Attacking his legs / tail with a hammer is no good, and in fact, will lead to Olly hitting you with a counterattack right after. To beat Olly, the main goal should be getting to the Vellumental Magic Circle (you'll of course need to walk over an ON Panel first), then choosing to use the Ice Vellumental's power. 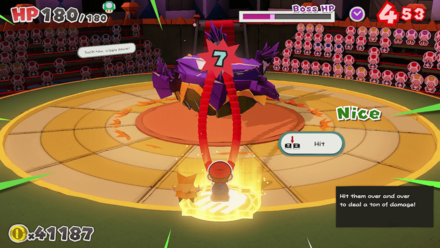 Once you do this, Olly will be frozen and unable to move. Set a course for the ON Panel and the 1000-Fold Arms panel, flip him over, then smash him during rush time to drain a significant portion of his HP, and finish off this form.

While this fight is more or less the same as the first time you fought the Ice Vellumental, it can be very frustrating, because of Olly's ability to recover HP. During Ice Maze, you'll need to plot out the best path, which naturally can take a long time, so it's important to get done with this maze as quickly as possible. If it helps, pay the Toads to cheer for you, and if you spend enough coins, you'll also be able to see the path Mario will take. 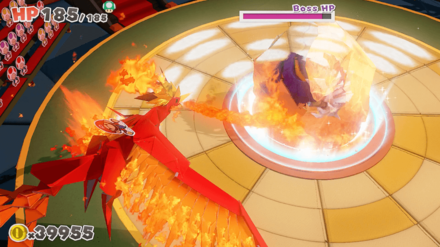 For the first Ice Maze, you need to memorize the path, make your way over to the ON Panel and Magic Circle, then use it to summon the Fire Vellumental. The most important thing is not to walk into the snow on the path, as it will stop Mario dead in his tracks, and cause him to take an attack from the final boss. On the second turn, you'll once again need to work your way over to the ON Panel and then the Magic Circle to activate the 1000-Fold Arms and end this form.

The main difference between Olly and the original Water Vellumntal fight is the fact that Olly's water spouts will circle around the center instead of being in a fixed location. This doesn't make it significantly harder though, as you can just wait until they are out of the way before you start your moveーjust don't wait too long because you don't want the final boss recovering. 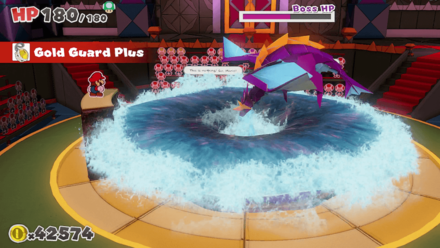 Also, Olly's Water Vellumental form starts off fully charged and ready to use Big Wave. This means that the very first thing you need to do is activate an ON Panel, and get to the Vellumental Magic Circle. Use the Earth Vellumental summon to dodge Big Wave. When you come down, Olly will be exhausted, so you can get up a path to another ON Panel, then the 1000-Fold Arms to end this form (it can also end the battle if he has somewhere between a 1/3 and 1/2 of HP remaining).

This form also follows the same strategy as the original. It will start of by spreading its Molten Wings across the board, which will drain a ton of its health. While you should try and avoid bumping into these, as each molten feather deals about 10-11 damage to Mario, the most important thing is getting through the board so you can summon the Water Vellumental and extinguish the flames.

After this, activate the ON panel, then use the Magic Circle to smash into the boss with the 1000-Fold Arms. If it only had a bit of HP left when you initiated the attack, it is very likely that you can finish it off here. 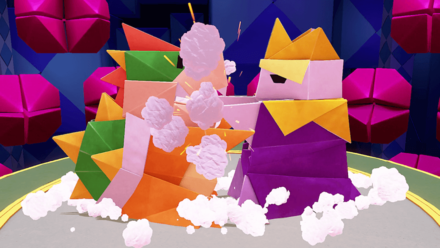 The second phase of the King Olly battle is unlike any other boss fight thus far. King Olly and Origami Bowser will basically be competing in a game of Kamizumo ('Paper Sumo'), and Mario has to help Bowser to get the upper hand. In order to win, go to the Magic Circle directly behind Bowser, activate it, then repeatedly slam on the ground until the timer runs out. 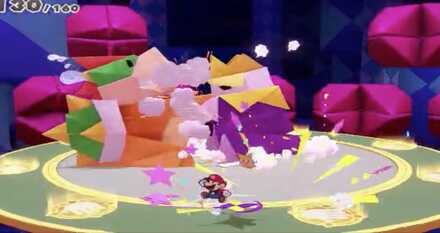 Olly will eventually send flying paper minions to stop you. You can simply jump over them, or better yet, jump on them to break them. They will come at varying speeds and patterns as the battle progresses, but as long as you time your jumps, it should be fine. Use the magic circle about six times, then Olly will summon a Thwomp.

When the cutscene ends, immediately use the Magic Circle and slam on the ground as fast as you can. If you are too slow, Thwomp will come down and crush you, giving you a game over. However, as long as you go fast enough, you should be able to defeat Olly in this phase. 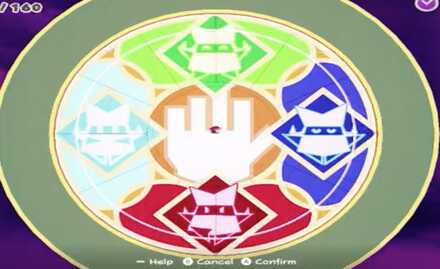 In the final phase of this fight, you will need to unscramble the puzzle so that it looks like the image above in order to gain use of the magic circle again. If done quick enough, it can be done in about three turns. You will have a few seconds for each turn, before Olly tries to attack you. All you need to do is dodge his attacks by correctly timing your A button presses. 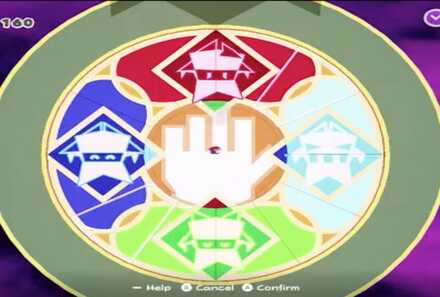 Start off by pressing R to change slices of the puzzle rather than layers. In the first two turns, you should be able to almost completely solve it, with it ending up like the image shown above, with only the center not being aligned. 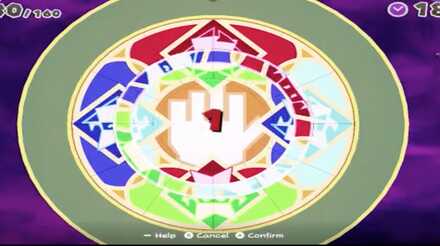 When this happens, press R again to rotate the entire puzzle around 180 degrees. Once you've completed the circle, you'll need to dodge Olly's attack again, but then just press X to activate the magic circle, then use the 1000-Fold Arms when prompted to finish him off and complete the game. 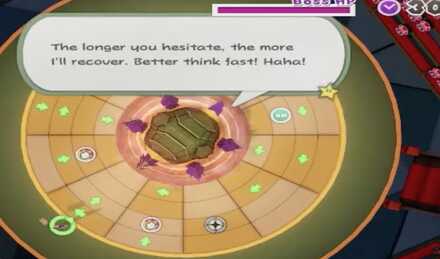 Since King Olly can regenerate HP, you need to make your turns fast, or else the battle will drag on. This can be especially frustrating if he transforms into the Ice Vellumental. If it helps, pay a bunch of coins to get the Toads to cheer for you, as it will both heal you and allow you to see a path, which will help you finish quicker.

Each Vellumental form has a particular element it is weak to (or at least, one that will come in handy in battle), so make sure to pick the right one. You should use these on the very first turn against each form, and then use the 1000-Fold Arms in the next turn.

You can spend coins for numerous effects. By pressing +, you can add more time to the clock, giving a little bit more leeway when figuring out the correct path for the ring puzzle (although in this battle, dragging out the time it takes to solve the puzzle leads to Olly recovering HP).

Pressing Y to cheer also has a very useful effect in this battle. If you spend enough coins, you will be able to recover some health, and in addition, Mario's path along the ring becomes visible. This will make it much easier to solve the puzzle and end up in the correct spot. Note however that this will only last during the current turn.

Since this is the last ring battle, you may as well go ahead and Cheer frequently.

Every time you go to use a Magic Circle, you need to activate the one directly behind Bowser. Watch out for the enemies' movement patterns when they show up to fly at you.

When solving the puzzle, press R immediately and change the puzzle's diameter to solve it faster. Once the puzzle is complete except for the innermost layer, press R again and rotate outer three layers into place.

Like others have said, none of my finale puzzles have been the same as the pictures shown, though I know you’re trying to help and are still getting info. Otherwise it helped a lot. Thanks!

That puzzle part is not like what I have, it’s more jumbled and some parts are upside down

Register as a member and get all the information you want. (It's free!)
Login
Opinions about an article or post go here.
Opinions about an article or post
We at Game8 thank you for your support.
In order for us to make the best articles possible, share your corrections, opinions, and thoughts about "Boss Battle Guide: How to Beat King Olly (Last Boss)" with us!
When reporting a problem, please be as specific as possible in providing details such as what conditions the problem occurred under and what kind of effects it had.